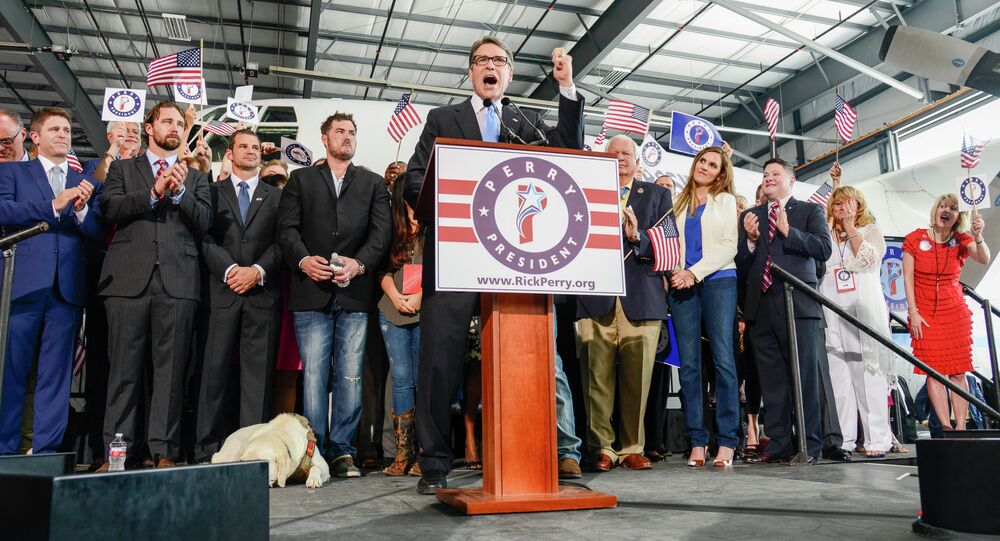 US Republican presidential candidate Rick Perry will need to overcome the flaws of his 2012 campaign to have any chance of winning next year’s Republican nomination for president of the United States, experts told Sputnik on Monday.

© AP Photo / Tim Sharp
Republican Big Money Donors Ignoring Rick Perry
“Perry will need to shake the ‘I don’t remember’ video from the 2012 campaign where he obviously could not recall several items on the list,” University of Miami Communication Professor Thomas Steinfatt said.

Steinfatt said that incident was only one of many instances where Perry, longest serving governor of Texas in the US state’s history, displayed ignorance over issues important to American voters.

However, if Perry can succeed in appearing “more aware of the issues in general, he will certainly appeal to the conservatives,” Steinfatt said.

Steinfatt said Perry would also have to appeal to independents and moderates, but his real chances of getting the nomination were slim to none.

State University of New York at Buffalo Distinguished Professor of Political Science James Campbell said Perry would have to work to impress voters in ways he did not in 2012.

“He enters the race with some baggage from the last run,” Campbell said. “He didn’t really perform that well.”

Perry would also have to unite the different branches of conservatism within the Republican Party, the expert said.

© AP Photo / Rainier Ehrhardt
Perry Faces Uphill Battle to Be Seen as Credible Candidate
“The problem is that it’s [Republican Party] is splintered,” the professor added. “You have all these branches of conservatism, and the successful Republican nominee will have to show they can unite these brands.”

Also, the state economy in Texas is currently faltering and this would be damaging to Perry’s claims of economic competence, the professor said.

Perry served as the governor of Texas for more than 14 years from December 2000 to January 2015.