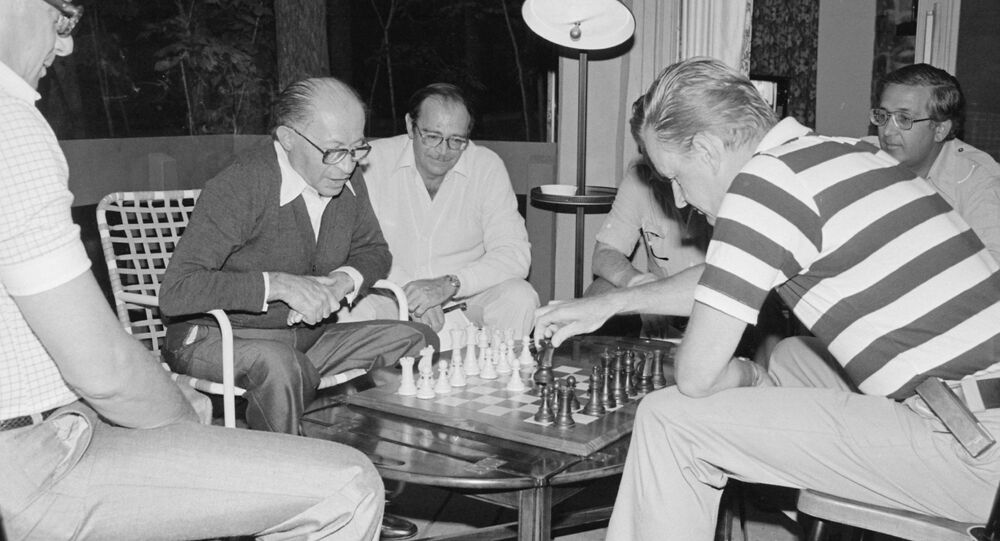 "We are, and I don't want to sound alarmist but I am alarmed, closer to the actual possibility of war with Russia than we have ever been since the Cuban missile crisis. That's how bad it's been." (Stephen Cohen)

Paul Fitzgerald, Elizabeth Gould — Russia historian Stephen Cohen points to the neoconservative establishment for America's latest outbreak of what can only be referred to as late-stage imperial dementia. Neocons Robert Kagan and wife Victoria Nuland have certainly done the heavy lifting to make Ukraine the staging ground for what appears to be a NATO blitzkrieg on Moscow. But whatever the determination of the neocon plot, they are only the barking dogs of master imperialist Zbigniew Brzezinski, whose grand design has been creeping over the globe since he stepped into the Oval office as National Security Advisor to President Jimmy Carter in 1977.

Brzezinski stands apart as the inspiration for the Ukraine crisis. His 1997 book The Grand Chessboard: American Primacy and its Geostrategic Imperatives lays out the blueprint for how American primacists should feel towards drawing Ukraine away from Russia because, "Without Ukraine, Russia ceases to be a Eurasian empire."

© AFP 2021 / Mandel NGAN
Brzezinski Family Business – Cold War
Brzezinski's obsession derives from British geographer Sir Halford Mackinder's 1904 definition of the Central-Eastern nations of Europe as the "Pivot Area", whose geographic position made them "the vital springboards for the attainment of continental domination." Whether anyone realizes it, the Obama administration's current campaign against Russia in Ukraine is of Mackinder's design brought forward by Brzezinski.

To an expert like Stephen Cohen, the Obama administration's indictment of Russia over Ukraine "doesn't correspond to the facts and above all it has no logic." But a look back forty years reveals that a lot of Cold War thinking wasn't fact-based either and it may now be instructive to look for answers to Washington's current dose of illogic in the covert origins of the U.S. supported 1970s war for Afghanistan.

As the first Americans to gain access to Kabul after the Soviet invasion for an American TV crew in 1981 we got a close-up look at the narrative supporting President Carter's "greatest threat to peace since the second world war" and it didn't hold up. What had been presented as an open and shut case of Soviet expansion by Harvard Professor Richard Pipes on the MacNeil-Lehrer News Hour could just as easily have been defined as a defensive action within the Soviets' legitimate sphere of influence. Three years earlier, Pipes' Team B Strategic Objectives Panel had been accused of subverting the process of making national security estimates by inventing threats where they didn't exist and intentionally skewing its findings along ideological lines. Now that ideology was being presented as fact by America's Public Broadcasting System.

In 1983 we returned to Kabul with Harvard Negotiation Project Director Roger Fisher for ABC's Nightline. Our aim was to establish the credibility of the American claims. We discovered from high level Soviet officials that the Kremlin wanted desperately to abandon the war but the Reagan administration was dragging its feet. From the moment they entered office, the Reagan administration demanded that the Soviets withdraw their forces, while at the same time keeping them pinned down through covert action so they couldn't leave. Though lacking in facts and dripping in right wing ideology, this hypocritical campaign was embraced by the entire American political spectrum and left willfully-unexamined by America's mainstream media.

At a conference conducted by the Nobel Institute in 1995, a high level group of former US and Soviet officials faced off over the question: Why did the Soviets invade Afghanistan? Former National Security Council staff member Dr. Gary Sick established that the U.S. had resigned Afghanistan to the Soviet sphere of influence years before the invasion. So why did the US choose an ideologically biased position when there were any number of verifiable fact-based explanations for why the Soviets had invaded?

© Sputnik / Evgeniya Novozhenova
Poland's Ex-Leader Sees Russia as One of Five Emerging Superpowers
To former CIA Director Stansfield Turner, responsibility could only be located in the personality of one specific individual. "Brzezinski's name comes up here every five minutes; but nobody has as yet mentioned that he is a Pole." Turner said. "[T]he fact that Brzezinski is a Pole, it seems to me was terribly important."

What Stansfield Turner was saying in 1995 was that Brzezinski's well-known hatred of Russia led him to take advantage of the Soviet's miscalculation. But it wasn't until the 1998 Nouvel Observateur interview that Brzezinski boasted that he had provoked the invasion by getting Carter to authorize a Presidential finding to intentionally suck the Soviets in six months before they even considered invading.

Yet, despite Brzezinski's admission, Washington's entire political spectrum continued to embrace his original false narrative that the Soviets had embarked on a world conquest.

For Brzezinski, getting the Soviets to invade Afghanistan was an opportunity to shift Washington toward an unrelenting hard line against the Soviet Union. By using covert action, he created the conditions needed to provoke a Soviet defensive response which he'd then used as evidence of unrelenting Soviet expansion. However, once his exaggerations and lies about Soviet intentions became accepted, they found a home in America's imagination and never left.

The Brzezinski-drafted Carter Doctrine put the U.S. into the Middle East with the Rapid Deployment Force, China became engaged as a US military ally and détente with the Soviet Union was dead. The Reagan administration would soon advance on this agenda with a massive military buildup as well as expanded covert actions inside the Soviet Union by the Nationalities Working Group.

The Polish born Brzezinski represented the ascendency of a radical new breed of xenophobic Eastern and Central European intellectual bent on holding Soviet/American policy hostage to their pre-World War II world view. His early support for expanding NATO into Eastern Europe and Ukraine was opposed by 46 senior foreign policy advisors who referred to it in a letter to President Clinton as "a policy error of historic proportions."

Yet in 1999, the Clinton administration, urged on by what Time Magazine described as "Ethnic lobbying groups such as the Polish American Congress," began implementing the plan.

US policy since that time has operated in a delusion of triumphalism that both provokes international incidents and then capitalizes on the chaos. A destabilizing strategy of sanctions against Russia, the American military's training of the Ukrainian National Guard, US troops parading armored vehicles within 300 yards of Russia's border and warlike statements by NATO leaders can only mean the US is committed to Brzezinski's strategy of seizing the "Pivot Area" and holding it.

Today it's Brzezinski's son Ian who finds Moscow at the root of America's problems regardless of the facts. He recently recommended to the Senate Armed Services Committee that the authority to make war on Russia should be taken out of President Obama's hands and given to NATO's top commander, General Phillip Breedlove; a man accused by the German government of exaggerating the Russian threat in eastern Ukraine by spreading "dangerous propaganda".

The time has come for the American public to be let in on what US foreign policy has become and to decide whether the Brzezinski family's personal obsession with fulfilling Mackinder's directive for conquering the pivot of Eurasia at any cost, should be America's goal as well.

Paul Fitzgerald and Elizabeth Gould are the authors of Invisible History: Afghanistan's Untold Story,  Crossing Zero The AfPak War at the Turning Point of American Empire and The Voice. For more information visit their websites at invisiblehistory and grailwerk. They can be reached at gould.fitzgerald@verizon.net.