Speaking with Radio Sputnik Israeli publicist Avigdor Eskin commented on US foreign policy, Washington’s stance towards Ukraine and the Ukrainian crisis in general.

You’ve probably heard about the statement that Under Secretary of State of Arms Control and International Security, Rose Gottemoeller said about the agreement that, in terms of missile defense and cooperation between Washington and Moscow. So does it look like a variety of the Russian peace proposal or is that something new?

Avigdor Eskin: Actually it does, and we don’t know the details to see how new it is, we can only say that probably May the 9th and the Parade in Moscow made such an impression in Washington that we see people talking in totally different manner. You know, yesterday there was an interview on Russian Television, with a quite well known political scientist, Dimitri Simes. He was in President Nixon’s team, with very good knowledge about what’s happening in Washington, and he said that the mood changed completely.

After May the 9th?

svoboda
On a Mission to 'Destroy Moscow’ – Kiev Nationalists Remember World War II
Avigdor Eskin: Well, he did connect it with May the 9th. He did say there is certain reloading of American policies now towards Russia and deep understanding that it was a failure. With all the respect to statements of different centers like McCain or other half insane people in Washington who just try to make some publicity on that, including one republican candidate, black candidate, who said that America should act militarily against Russia.

But those who understand what we are talking about, the expert community in Washington, they saw that Obama’s policy is just abomination, it doesn’t work at all: no accomplishments, nothing to show, nothing to defend even, it’s just one big failure. And they cannot say that an accomplishment of American policy is certain inflation in Russia and semi crisis which they talk about it more than people think about it in Russia.

Especially if we look at foreign policy as well.

© RT .
Ukrainian Nationalists March in Torch-Lit Rally Through Central Kiev
Avigdor Eskin: I also want to mention the very special project in the well-known MGIMO, Moscow Foreign Relations Academy, headed by Professor Alexei Podberezkin exactly on the matter of anti-missile program. He was one of the negotiators back in the late 80s, so he knows Americans very well, and they know him, and he is involved in a special research. And in general terms, the proposals which come now from Washington, sound like certain response to some of the ideas which came from MGIMO and the Russian Foreign Ministry. It sounds like that.

The Donetsk and Lugansk National Republic Leaders also demanded full autonomy status. You are obviously aware of that. And why do you think that correlates with the other peace initiatives?

Avigdor Eskin: Also, when the president of Ukraine Poroshenko threatens these people again with violence, speaks openly about attacking Donetsk Airport, what can they feel? I mean, when the government of Ukraine puts in prison thousands of people just for being of another opinion, compared to the situation in Nazi Germany, first and second year, you will not find there as many political prisoners as you find today in Ukraine.

© AP Photo /
NATO Chief on Ukraine: Actions Speak Louder Than Words
I mean, it’s not a joke, when these people say that their heroes are Nazi War Criminals, they act accordingly, they mean business, they mean it, they mean the imprisoned people. Again we are talking about thousands and thousands of people and we receive all the time information from Kharkov, from other places: well, in some places still the police in Ukraine is bribable. This is only good thing we can say about them.

Do you know anything about the available spaces in jails, in Ukrainian jails? Are they filling up quickly?

Just for having a different opinion?

© AFP 2019 / SERGEY BOBOK
Poles Criticize Honors for Ukrainian Nationalists Introduced by Kiev
Avigdor Eskin: Just for having a very certain opinion that the pro-Nazi ideologists are not what they like. They can be more pro-communist, pro-liberal, some of them can be pro-democracy, or pro-Russia whatever it is. But the reason they are imprisoned is only because they express their opinion at certain rallies, in certain places on internet, and they go to jail just for that.

Avigdor Eskin: The mood will be changing everywhere. The impact of May the 9th in Moscow is tremendous. There saw in Russia whole 20 million people, here, in Moscow, half million people. And unlike during the time of the Soviet Union it was out of people’s free will. It’s not that it was organized by the Communist Party and they saw that the sanctions, it’s not just that they don’t work, but despite the sanctions, Russians stand behind the basic ideas of their existence and they are ready to fight, and there are also of course certain weapons and they understand that something must be changed.

© AP Photo / Sergei Poliakov
Kiev Democracy False As Odessa Massacre Perpetrators Unpunished - Ombudsman
Also due to the situation in Syria, where President Assad is losing now, and nobody knows what’s going to be instead. And nobody knows how to control the situation after Assad, if Assad fails totally, with all disrespect to some of his methods, and some methods of Hezbollah, and believe me: the government of Israel is not in favor of Hezbollah and Assad, but even in Israel everybody today realizes that Assad was not the worst choice, when you see other guys there walking around and just chopping heads, slaughtering people.

It’s something which has been done with American money by the way. I mean, we don’t want to say, and we don’t say that America sponsored this Islamic State idea, with all the methods of conviction, like chopping head. We don’t say and it’s not true, but the outcome of America policy was that, and, Obama understands, that he is going to be blamed for it.

We don’t actually have to state this as a fact. We can just go back and look at the history, when the United States created Al Qaeda in the beginning of the 80s.

So history just repeats it. Everything is interconnected. Money especially plays an important role and we just heard recently that the international monetary fund – IMF – is not really interested in sponsoring Greece for the third time with the bailout, after its current programs are going to end in June. Now, there is a current split going on between the IMF and EU, and if IMF pulls out this will mean a lot, this will be a big hit for Eurozone credibility. How is that going to influence Ukraine?

Avigdor Eskin: That’s the question, I mean, these people in Kiev — they believe that somebody is going to feed them just because they say once a week that they want to travel to Europe. 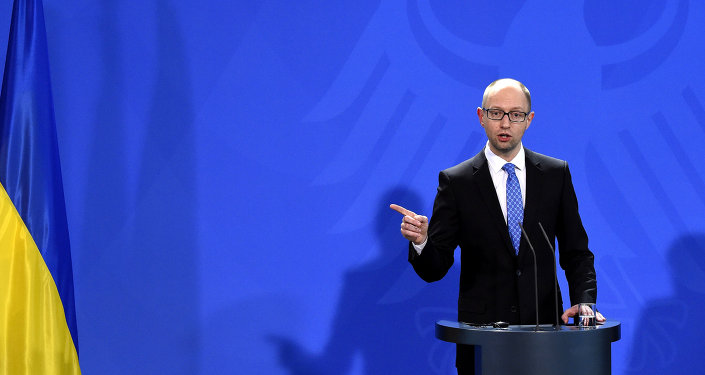 © AFP 2019 / TOBIAS SCHWARZ
Ukraine is 'Bulletproof Vest' of Europe - PM Yatsenyuk
But Europeans don’t want Ukrainians to travel to Europe, not at all. They don’t want it. So you have a clash today between the government of Ukraine and some European governments already, because they want free travelling and they are not going to get it. They want more money because they have to feed their population, and they cannot do it now.

And, well, at the end of the day, they will call somebody in Moscow, I believe. I mean, where else? I mean, who else will they call? I don’t know.

Going back to Ukraine… The organizers of Anti-Jewish pogroms in 1760s I believe, 1770s, I think it was Ivan Gonta, he is going to be glorified in the city of Uman in Ukraine, which is of course, the famous place for Hassidic pilgrimage, and the monument of Gonta is pretty much going to become the symbol of Uman right now. How is that going to affect the city pilgrims that are still in the city?

Avigdor Eskin: Well, I personally believe that we had to negotiate with the Ukrainian government about removing the tomb of Rebbe Nachman, who is buried there, to bring his remnants to Israel and that’s the only solution. It will look more than humiliation when these people will come. And actually the city which spiritually is so much connected to Rebbe Nachman, to this old tradition, yes, this is the history.

© AP Photo / Vadim Ghirda
International Community Must Pressure Kiev for 2014 Odessa Massacre Report
It’s connected also with Ivan Gonta and the symbol of Uman is going to be Ivan Gonta and not Rebbe Nachman. Again, nothing to be surprised in Ukraine, when the person who led the Jews to Babi Yar is specially commemorated in Kiev. There is a memorial placed for him. So, I mean, you can expect anything in Ukraine, not only Gonta.

But the time has come, probably, for the Israeli Government to try to take the remnants or Rebbe Nachman to Israel, and let the people of Uman enjoy Gonta and these people who will visit his grave. We will see how many of them will ever come, of his disciples.