Voters in 650 constituencies across the UK will go to the polls in Thursday's General election which is likely to be a very close contest.

Unfortunately, it's not true to say that 'every vote counts equally' because under Britain's first-past-the-post electoral system, some votes matter much more than others.

Many constituencies are 'safe' seats — ie its easy to predict which party will win them. We all know for instance, that Labour will hold onto Liverpool Walton and that the Conservatives will retain Henley. The election won't be decided by these results, but what happens in the so-called 'marginals'. It's voters in these constituencies who will effectively decide the result of the election. What are the seats we should be paying particular attention to as the results start to come in on election night?

Here are ten of the most important election battlegrounds — not simply the ten most marginal seats — but seats where the results will have a particularly big impact and where the parties are going all out to win. 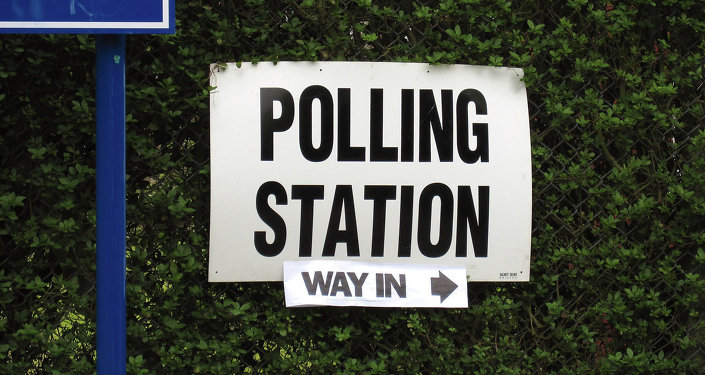 The Conservatives, Labour and UKIP can all entertain hopes of winning in the historic seaside resort on the Norfolk coast. A poll last week from Conservative peer Lord Ashcroft puts the Conservatives two points ahead of Labour, with UKIP — who got 41% of the vote in 2014's local elections, slipping from second place to third. If Labour can't win this — given local long-term unemployment problems — it would be disappointing for Ed Miliband — it's the sort of seat it needs to be winning to get an overall majority in Parliament. Significantly, Labour won it in their great victory in 1966, and during the Tony Blair years.

If UKIP defy their current odds of 16-1 and prevail, then the party will be in for a much better night than many pundits currently forecast. The likeliest result though looks like being a Tory win with a reduced majority — indicating that nationally we‘ll be into hung Parliament territory.

In this Yorkshire seat, we've had the highly unusual spectacle of the Conservative candidate urging people to read the 'inspiring personal history' of his Labour opponent.

My Labour opponent for #BradfordWest, @NazShahBfd, has an inspiring personal history to tell. I suggest you read it: http://t.co/uvUHk02A9R

What's going on? The answer is that both the Conservatives and Labour — and the British establishment in general — would love to see the political demise of George Galloway, the leader of Respect, who won the seat with a majority of over 10,000 in a by-election in 2012. The attacks on Galloway have been unrelenting. We've even had an editorial in the Rupert Murdoch-owned Times calling on voters to 'seize the chance to punish' the former Labour MP on May 7.

However, the bookies odds don't give the endless war brigade, who for obvious reasons don't want the most eloquent and outspoken anti-war politician in Britain to be re-elected, grounds for optimism as Galloway is the red-hot 8-13 favourite. It could be even worse for the neocons if Ed Miliband requires Galloway's support in a hung Parliament — which could happen if the polls are correct.

Latest Poll could give me the casting vote in next parliament. No wonder the Establishment are panicking!# #BradfordWestRising #CityOfGold

Galloway has said that he will require the "immediate recognition of Palestine."

The Galloway Declaration :-) If Miliband needs my vote I will require the immediate recognition of Palestine.

The bookies make it one of the tightest contests in the country — with the Lib Dems currently the very slight favourites (5-6) over the Conservatives (10-11) — who are counting on Scott Mann, a local postman, to deliver them success. A recent poll showed a quite significant swing away from the Lib Dems towards the Tories in the south-west, and if the Lib Dems lose this seat, which they‘ve held since 1992, it won't augur well for their chances of holding onto their other seats in the region. 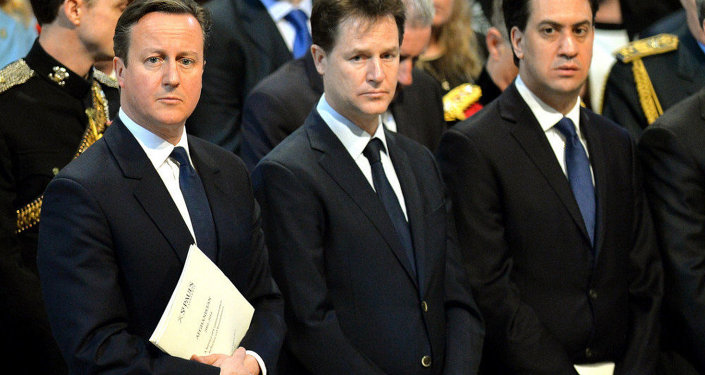 Dan Rogerson, the Lib Dem MP since 2005, and the only Lib Dem MP on the Political Council of the neocon Henry Jackson Society, will be hoping that Tory voters moving to UKIP (who finished third in 2010), will allow him to return to Westminster.

A key marginal, which the Conservatives won by a mere 176 votes in 2010, when an animal rights activist took a crucial 143 votes. It's a bellwether seat for the Tories as when they win it, they form a government — they held it from 1983-97, but then it went Lib Dem until 2010. This time the Lib Dems have a less divisive candidate than they had five years ago, but nevertheless, their challenge might be weakened as young people who voted for them in 2010 are likely to defect to the Greens or Labour over broken promises on tuition fees.

Brilliant to be back in Abingdon campaigning for @nicolablackwood. pic.twitter.com/dChkjEBZyW

The Lib Dems could also lose left/centre-left support to the National Health Action Party, who have strong local links. Bookies make Tory Nicola Blackwood, who won in 2010, the odds-on 1-7 favourite to retain the seat, but looking at the national polls, this could be the first time the seat has been won by the Tories and they haven't ended up in government.

The seat of Education Minister Nicky Morgan, this Leicestershire constituency is number 51 on the list of target seats for Labour. Since 1979, this seat has been won by the party which wins the general election and so its capture by Labour is likely to be significant. The Labour candidate Matthew O'Callaghan, was raised and went to school in the county and would look to have a lot going for him; however, the bookies make the Oxford University-educated Morgan around 1-4 to hold on to her seat.

For a strong and effective MP who will be accountable to you please #VoteConservative here tomorrow pic.twitter.com/QvrheJnbpA

How many Labour gains against the Conservatives in England will be cancelled out by losses to the SNP in Scotland? One prominent Labour politician who looks very vulnerable is Douglas Alexander, the Shadow Foreign Secretary and Labour's campaign manager. One bookmaking firm goes as big as 5-2 for Alexander to retain his seat — with the SNP — and their 20-year-old candidate Mhairi Black, red-hot favourites at 4-9. If Alexander does hold on, then it won't be as bad a night as feared for Labour north of the border, but the SNP look to be on a right roll at present — with Labour's cause in Scotland not helped by having an ultra Blairite Jim Murphy — who could also lose his seat in Renfrewshire East to the SNP — as their leader.

Can Nigel Farage, leader of UKIP make it to Westminster? In 2010 his party got no seats — but in last year's European Parliament elections, held under a different electoral system, they topped the poll. First-past-the-post is clearly not in UKIP's favour, but if there's one part of the country where their support is particularly high it's in south eastern coastal areas and around the Thames Estuary.

The Tories had a majority of over 7,000 when winning the seat from Labour in 2010, but the bookies make UKIP's leader the favourite at around 8-11 to land the seat this time. Farage's political future is really at stake here — he's said that he'll resign as UKIP leader if he fails to win. However, if the bookies have got it right, it looks as if he's chosen well.

While it would be a massive surprise if party leaders David Cameron and Ed Miliband weren't returned to Parliament, we can't say the same about Lib Dem leader Nick Clegg who faces a real battle in his own South Yorkshire constituency. Clegg is the clear, odds-on bookies favourite to win, but Labour, who have an impressive Sheffield-born candidate, are only 5-2 to topple him.

Sheffield last night. Westmorland early this morning with Tim Farron Just been with Jo Swinson in East Dunbartonshire and now off to visit Danny Alexander in his seat. Getting closer to the end of the epic 1,000 mile #WinningHere journey.

It would be a major coup for Labour if they can claim the scalp of the Deputy Prime Minister, especially considering their candidate polled over 19,000 votes fewer than Clegg in 2010. But a lot has happened since then, and student voters (who make up around 17% of the electorate in the seat) are likely to punish Clegg for his broken promises on tuition fees.

Whether Clegg survives is also likely to depend on what happens to the Tory vote (Tories came second with 12,040 votes in 2010) and whether Conservatives will decide to vote tactically for the Lib Dem leader to keep Labour out.

There's a tight three-way battle in the Essex seat between the Conservatives, who won the seat by just 92 votes in 2010, Labour, who have held the seat for all but five years from 1945-2010 and the 'new kids on the block' — UKIP.

Labour's candidate is Polly Billington, a former BBC journalist and special advisor to Ed Miliband, but the bookies make the favourite the UKIP candidate Tim Aker, who is currently as short as 8-13 in the betting, with the Conservatives now out to 9-2.

Get your free window poster with this week's @ThurrockGazette pic.twitter.com/9ytUYcttZB

Aker has called for potential Tory voters to switch to him to keep 'Ed Miliband's candidate' out — and if enough of them do that, he is likely to defeat Labour in the sort of seat they really should be winning.

The Welsh seat, won by the Conservatives in 2010, is number 62 on Labour's target list and the result looks likely to be significant. It was a Labour seat from 1997-2010, when the party was in government, and Labour will probably need to win it again if it's going to have a majority in Parliament. The Conservatives' majority in 2010 was 3,423 and if Simon Hart, a former Master of Foxhounds, gets the chop, it'll be Labour who'll be crying 'Tally- ho!'.

One Lab vote I'm pretty confident of getting on Thursday..! #GE2015 pic.twitter.com/HGjYymyCwg

But if the bookies, who make the Conservatives favourites to retain the seat at around 1-2, have got it right, it'll be David Cameron who'll be taking heart (no pun intended) — from the result.