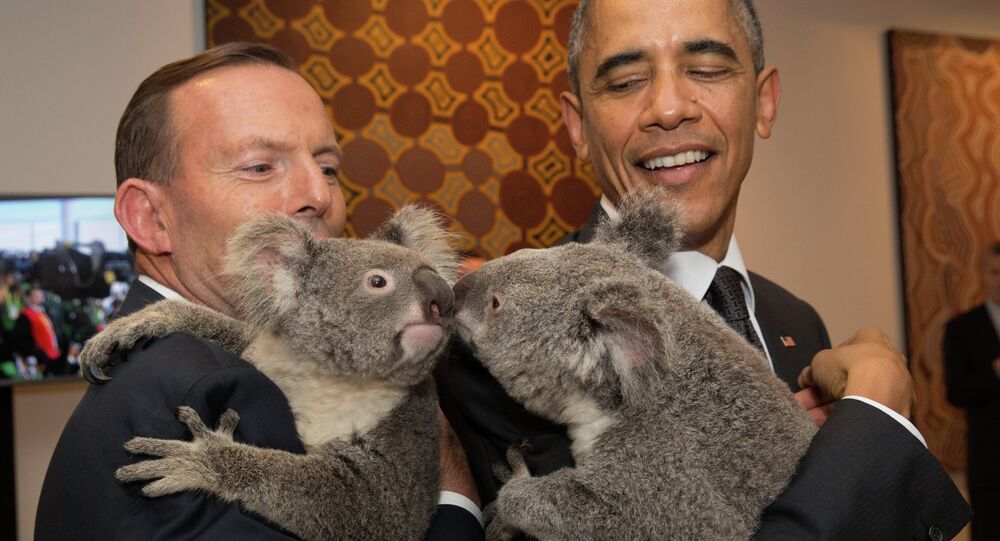 In an interview with Sputnik, Australian social activists and members of Australia's Labor Party, Susan and Iman Safi, highlighted the problem of media misinformation in the West, Australia's deplorable political dependency on Washington and the role of Russia in global affairs.

"Western media, which is "best" represented by Rupert Murdoch's News Limited, has lost its honesty, independence, and the quest for investigative journalism. Where are today's equivalents of Bernstein and Woodford who broke the story of the Watergate scandal?" Susan and Iman Safi emphasized.

So far, according to the social activists, it is hardly surprising that Australia's media sources have jumped on the bandwagon of the US-led anti-Russia campaign.

© Sputnik / Oleg Lastochkin
Abbott to Prevent Russia, North Korea From Bidding on Submarine Tender
On the other hand, Canberra is not "independent" when it comes to matters of foreign policy. Since the end of the Second World War, Australia's political establishment has been in cahoots with America on practically every matter, "going all the way with LBJ" (a term used by the Australian PM at the time when asked by the 36th President of the United States Lyndon Johnson to send troops to Vietnam), Susan and Iman Safi stressed.

Australia is highly concerned regarding its security and believes that if its policies suit the US' interests that will automatically guarantee Washington's assistance when such is needed.

That is why Australia's Prime Minister Tony Abbott has never missed a chance to criticize Russia, blaming it groundlessly for shooting down the infamous MH17 flight over Donbass or invading Ukraine.

"Unless Australians are prepared to question their need for dependence on America, and some are beginning to do this, PM Tony Abbott can feel at liberty of accusing Russia of the extinction of the dinosaurs," Susan and Iman Safi noted with a touch of irony.

© Sputnik / Alexei Kudenko
Australia's Abbott Thanks Ukraine's Poroshenko for Support Over MH17 Crash
"As a matter of fact however, a former Australian PM, Malcolm Fraser, who died recently, wrote a book titled ‘Dangerous Allies’ in which he details the dangers of an alliance that no longer suits Australia's interests and goes even further to say that the alliance with America brings more danger to Australia than not having one," the social activists underscored.

Washington's military adventurism in the Middle East, NSA global surveillance exposed by Edward Snowden and the US' involvement in the Ukrainian coup of February 2014, carried out by neo-Nazi paramilitary groups, have become alarming signals to the world.

"We believe that all forms of USA/NATO/EU interventions in Ukraine are both provocative and foolish. They are based on lies with the single objective of demonizing Russia as a foreground to bring it down," they pointed out.

According to Susan and Iman Safi, who created the international group "BRICS for Polycentric World" on social media, the BRICS are a driving force behind a transformation of the world economy away from a US dominated system.

Moreover, the BRICS will determine the degree to which a new international political order is developed, they believe.

© Flickr / Duncan Rawlinson
Chomsky: Corporations Greatest Threat to Freedom of Speech in US
Meanwhile, the West is rapidly losing its high moral ground and position as a "beacon" of liberty and free speech, since it is exercising selective censoring and sanctioning. Free media in the West is quickly becoming a thing of the past, they remarked.

"It is the lies and the deception of the media and the misinformation that Westerners accept as true that allows politicians like Australian PM Tony Abbott to accuse Russia of downing MH17 and to rudely and extremely undiplomatically use street language such as ‘shirt fronting’ President Putin," Susan and Iman Safi noted.

"As Australians, we feel very ashamed of this series of events and whilst we don't have the formal capacity to apologize on behalf of all of Australia, we will nonetheless say that we are very sorry that this has happened. Mr. Abbott's words and actions were not said and done in our name."

According to Susan and Iman Safi, Russia is currently at the forefront of fighting, on the diplomatic and moral front, tyranny and fascism in the world.

In light of the forthcoming 70th anniversary of the victory in the Second World War, the social activists claimed that regardless of the US-instigated boycott of the May 9 Victory Day Parade in Moscow, Westerners still remember and appreciate the outstanding role of the Soviet Union in defeating Nazi Germany in 1945.

Jacqui Lambie: "Shirtfronting Putin Would Not Be Smart Move for Abbott"