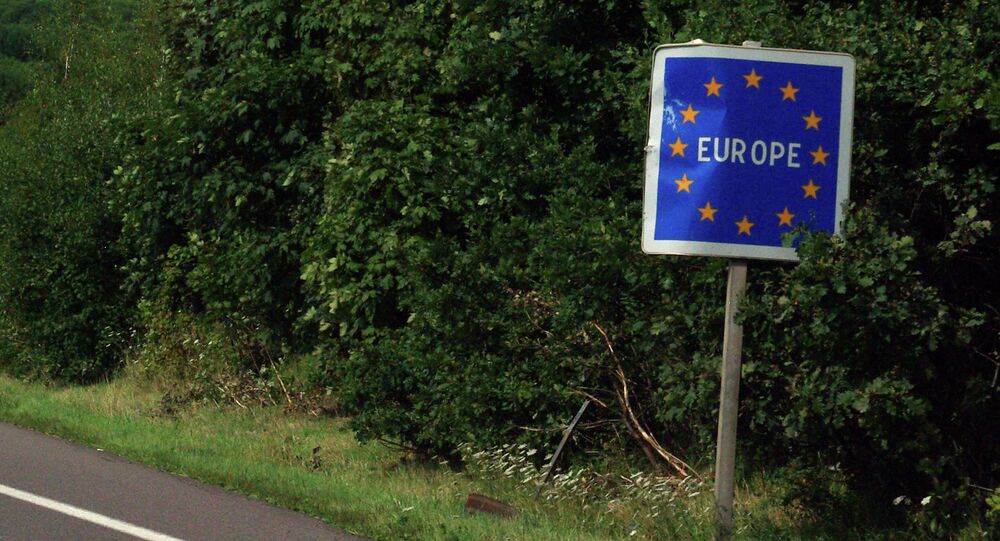 Despite claims by EU countries like Poland and Germany that they are governed by the rule of law, rather than by the arbitrary decisions of individuals in power, the recent hysteria surrounding Russian bikers' plans to travel to Berlin to commemorate Victory Day, including entry bans, seems to have demonstrated otherwise.

© Sputnik
Moscow Summons Polish Ambassador Over Russian Bikers Entry Ban
The Night Wolves had planned a modest 40-bike rally in honor of the 70th Anniversary of Victory in the Second World War. The motorcyclists, seeking to ride from Moscow to Berlin, planned to stop at monuments and military cemeteries along the way in Belarus, Poland, the Czech Republic, Slovakia and Austria before ending up in Treptow Park in Berlin.

The Russian bikers' trip was cut short after they reached the Polish-Belarusian border early Monday, where Polish border guard services, beefed up by Polish security services, subjected them to several hours of checks before ultimately refusing them entry, either collectively or individually, despite the fact that all the participants had valid Schengen area visas. Poland's heavy reinforcement of the border crossing at the Belarussian-Polish border at Terespol to meet a few dozen bikers seemed like a bit of an overreaction, to say the least.

The Polish Foreign Ministry has offered a stream of flimsy excuses for why the Night Wolves would not be allowed to enter Poland. Last Friday, the Ministry said the bikers would not be allowed to enter because they did not provide authorities with a list of their activities in Poland, including their exact routes and rest stop locations. Then, as the bikers reached the border, border services claimed their visas were 'filled out incorrectly'; a border services spokesman stated categorically that "these people will not cross into Poland." A Pole who witnessed the sideshow later told Sputnik that the bikers were given documents stating that they were personae non gratae in Poland.

© AFP 2021 / JANEK SKARZYNSKI
Polish Bikers to Honor Russian Night Wolves by Riding Same Route
Following the Polish government's hysterical reaction to the commemorative event, Germany soon followed suit, announcing that it had canceled the visas of a handful of the rally participants, with police officials in Berlin stating earlier that the Night Wolves would not be allowed to ride together through the city on their way to Treptow Park. Bild reported that Angela Merkel's Foreign Office had sent an official appeal to the Federal Foreign Office to ban the bikers.

Rounding out the affair, officials from the Czech Republic stated that the Russian bikers would not be allowed through their country either, citing the Night Wolves' failure to apply for official permission to enter.

Political Considerations Above the Law, Apparently

The politicized nature of the European countries' decisions to ban the Night Wolves from staging their victory ride seems obvious to everyone involved. Many Western media sources have focused heavily on the fact that the bikers' leader, Alexander Zaldostanov, is a friend of President Vladimir Putin, as if that somehow justifies the politicized decision not to allow the bikers, who possess valid Schengen visas, to enter Schengen area.

© RIA Novosti . Alexei Druzhinin
Vladimir Putin holds up a Soviet-era naval flag alongside Alexander 'Surgeon' Zaldostanov at a bike show in Sevastopol, 2010. Zaldostanov's friendship with the Russian leader is no secret to anyone.

However, many Poles, Czechs and Germans have thrown the politics of the Night Wolves aside, noting that they sympathized with the bikers aims regardless or even in spite of their political allegiances. Most stated that the bikers' aims –to visit memorials and cemeteries and to pay respect to their forefathers, who defended the world from fascism, was a noble aim worth supporting.

This was particularly true in Poland, where biker and Katyn Raid commander Wiktor Wegrzyn raised a lot of noise over the past couple weeks by vowing that Polish bikers would ensure the Russians hospitality and safety while on Polish territory. Wegrzyn was indignant over authorities' arbitrary decision not to allow the bikers to enter, telling Sputnik that he couldn't understand why the Russians were banned, and noting that he felt that they were being used "to create a Polish-Russian conflict." Wegryzn's own group of bikers had visited the site of the infamous Katyn massacre in Russia over a dozen times; not only had they proceeded without incident, they were openly welcomed in the Russian cities they visited.

Other Polish commentators were similarly disappointed by what they saw as politicization of a memorial event. Mateusz Piskorski, a local political expert who went to the border to see the Russians enter Poland, told Sputnik that Polish authorities' decision not to let the bikers in "caused great disgust amongst the crowd of several hundred" that had gathered "to welcome the Russian motorcyclists in Poland." The expert added that he hopes that the Russians would understand that the decision was made by the government, and not by ordinary Poles.

Bernd Schade, a German biker priest, recently told Sputnik that he had no doubts that the incident was "sharpened in connection with 'high politics' tension…between West and East," adding that he and other German bikers welcome the Russians and "do not see anything provocative about their planned route."

Politics Aside, the Show Must Go On

© Sputnik / Maxim Blinov
Russian Night Wolves Bikers Cross Border Into EU
Over the weekend, following Poland's initial commentary about banning the Night Wolves entry, a defiant Zaldostanov commented that giving up the ride would mean giving up "everything – May 9, the graves [of the fallen Soviet soldiers], monuments, memory, our history, on all our values; we would lie in a coffin and die. This will not happen."

On Thursday, the Night Wolves reported in their blog that a group of bikers had successfully made their way into the EU, despite attempts by authorities to prevent their passage. "In spite of the orders given at all the border posts 'don't let in the Night Wolves,' we have managed to cross the border!" The bikers vowed to continue their trip, vowing that politics will not get in the way of historical memory.

Finnish Border Guard on the Lookout for Russian Bikers