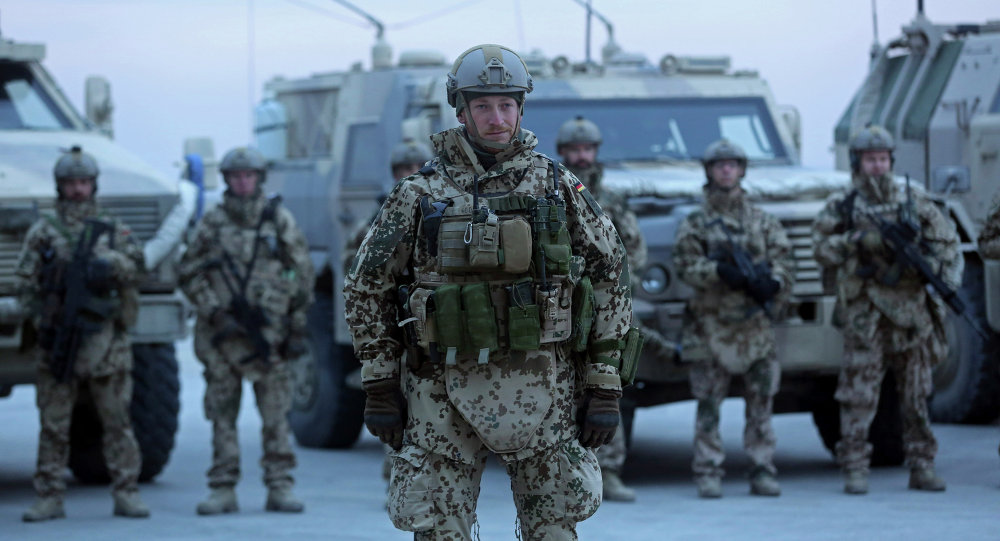 On Monday, NATO Secretary General Jens Stoltenberg reiterated that the alliance would double the size of its Response Force from 13,000 to 30,000 as a response to "the behavior of a more assertive Russia in the East."

MOSCOW (Sputnik), Svetlana Alexandrova – NATO is doubling the size of its military contingent in Europe as part of a US geopolitical plan to complete a "military circle" around Russia, the co-president of the International Peace Bureau (IPB) told Sputnik on Tuesday.

On Monday, NATO Secretary General Jens Stoltenberg reiterated that the alliance would double the size of its Response Force from 13,000 to 30,000 as a response to "the behavior of a more assertive Russia in the East."

© Flickr / ResoluteSupportMedia/Master Sgt. Christopher DeWitt
Ukraine’s Membership in NATO is Impossible – German Media
"Since the beginning of the 90s, the United States wanted to complete a military circle around Russia," IPB Co-president Reiner Braun said, adding that Ukraine was an "empty space" in the US geopolitical game, therefore, Washington had to change the political regime in Kiev to fill in the gap.

Braun believes that Washington is responsible for the "military aggression" toward Russia through Ukraine. He mentioned that the United States brought their true intensions to light in July 2014 when US Congress passed the Russian Aggression Prevention Act (RAPA), which granted Ukraine, Moldova and Georgia major non-NATO ally status to authorize the transfer of military assistance to Ukraine and to share intelligence with Kiev.

The current crisis in Ukraine should also be attributed to the European Union member states that are part of NATO, Braun stressed, adding that, "the EU economic aggression and desire to get Ukraine under the Western influence is a big part of the problem but not a part of the solution."

According to the IPB co-president, NATO's "special plan" for Ukraine is just a cog in its larger geopolitical game aimed at enlarging and disseminating its influence among Western countries that are politically and economically close to the alliance but not members, such as Sweden and Finland.

Recent discussions about Sweden's and Finland's potential NATO membership were brought on by the Ukrainian crisis, in which Sweden, as well as other Western states, sees Russia as the aggressor, Braun said.

Finland and Sweden are currently members of NATO's affiliate program, known as the Partnership for Peace. Finnish President Sauli Niinisto announced last June that Finland and Sweden had made a joint proposal on collaboration with the alliance.

© Flickr / The US Army
NATO Response Force Doubles, Claims Threats to Europe from East and South
Braun pointed out that NATO membership might become a reality for these Northern European states, however, he stressed, such a move would require broad public debate within the countries. "I think, Helsinki might play with the idea of joining to get better relations with Russia," he added.

According to Braun, the prospect of NATO membership is unpopular not only among ordinary people in Finland and Sweden, but also among major political powers. "More than 50 percent of the population of these counties is against NATO membership," he said.

Russia and the West are currently experiencing tension in their relations. The United States and the European Union accuse Russia of "annexing" Crimea and escalating the violence in southeastern Ukraine, although Moscow has denied any involvement in the Ukrainian conflict.