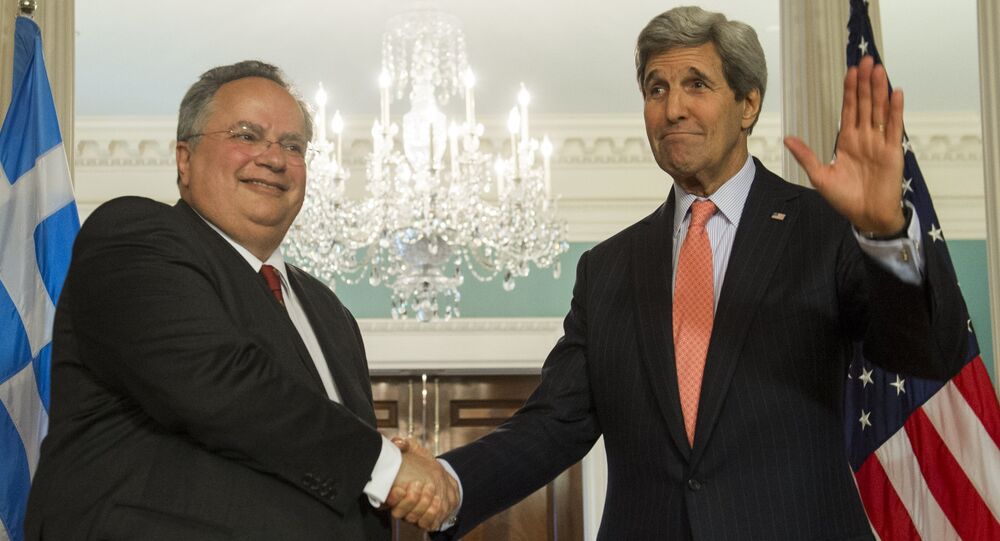 A political approach to Russia's economic proposal to invest in a gas pipeline running through Greece may prevent Athens from pursuing its own economic interests, a Greek expert told Sputnik on Friday.

Greek Foreign Minister Nikos Kotzias said Tuesday he was approached by US Secretary of State John Kerry who said the United States was willing to make a counteroffer, although details were not disclosed, according to the Associated Press.

Kotzias commented on his nation's considerations, saying they were purely economic, and not political.

George Kapopoulos, a senior political analyst for the Greek business magazine Imerisia, told Sputnik that Greece was at a crossroads.

"There are two attitudes to the energy strategy. The first one corresponds to the reality, to the real supply and transportation export. The second one has purely political and geopolitical priorities, and it often leads to choices that do not have economic logic."

The pundit added that Russia, a major gas supplier for Europe, cannot easily be replaced.

© REUTERS / Fabrizio Bensch
German FM Upbeat on Possible Gas Deal Between Russia and Greece
Under the label of energy security for Europe, Washington has been promoting its own energy projects in the region in a bid to wean it off Russian natural gas.

If Greece agrees to a joint energy project with Russia, this may put it at odds with Washington, which has long been critical of the European Union's reliance on Russian gas supplies.

If Greece refuses Russia, the United States may try to step in, although there is no knowing if it could out-compete Russia, which accounts for around 30 percent of EU gas imports.

Andreas Marazis, Junior Researcher at FRIDE, an EU-Spanish think tank on European development and dialogue, said it was impossible to predict the outcome without knowing the details of a purported US "counteroffer."

"Russia has made a concrete and seemingly attractive offer to Greece, but since the US has not yet clarified the precise details of its proposal, it is impossible to tell at this stage if it would be competitive with that of Gazprom."

Russia is building a major gas pipeline across the Black Sea to Turkey, continuing to its border with Greece. The Greek energy minister told Sputnik in early April that the countries would sign a memorandum of understanding on the Greek section soon.

The Greek pipeline could be built by a consortium of Russian and European companies, according to Gazprom CEO Alexei Miller.