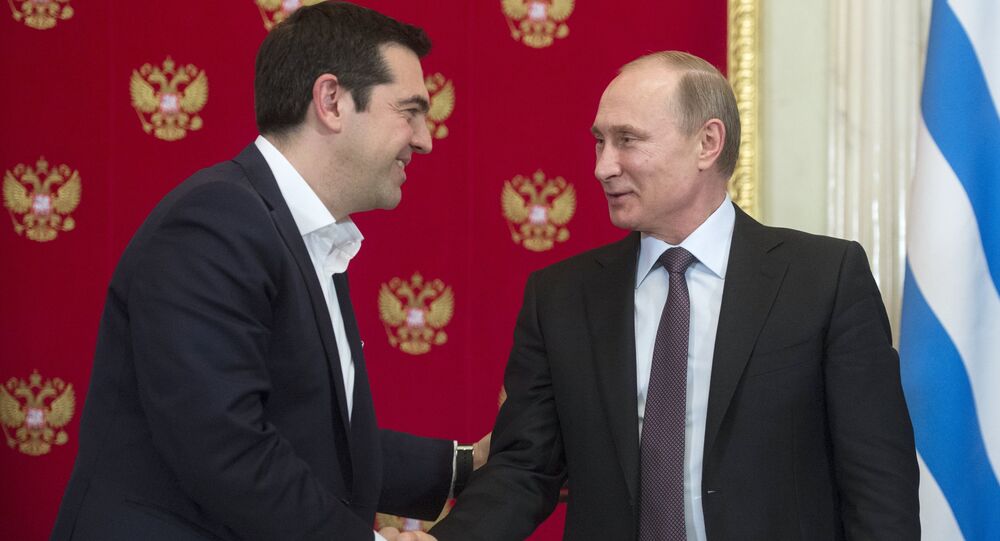 Clung to the bankrupt Washington and NATO dollar-dominated world, no one in Berlin, Paris or Rome dares to face the truth and realize that the EU countries are dying, F. William Engdahl noted.

It seems that the Greek government has finally realized that it should play in a "deadly power game" over the future of its country in an "asymmetrical manner": Athens is turning to Moscow and Beijing after it hit a brick wall in negotiations with the Troika, underscored F. William Engdahl, an American German historian and economic researcher.

"Greece was literally the Achilles Heel of the euro and Washington and Wall Street hit it with a savagery not seen since they ran the Asia Crisis and Russian sovereign default crises in 1997-1998."

© Sputnik / Vladimir Rodionov
Greece Will Not Return to Belt-Tightening Policy
Struck by severe financial crisis in late 2009, Greece has long been desperately seeking a way to escape the bloody austerity dictate from the EU.

However, demanding to implement more austerity measures in Greece, Germany is apparently neglecting the lesson it learned from the 1930s – "namely that austerity never solves a debt crisis, only real economic growth," the historian noted.

Thus far, "after hitting a wall in appealing for easing of the austerity" to allow the Greek economy to take a breath, the Greek government, led by Prime Minister Alexis Tsipras, has turned to the East – Moscow and then Beijing.

© AP Photo / Alexander Zemlianichenko, Pool
Tsipras’ Top Three Take-Aways From Moscow
According to F. William Engdahl, Tsipras' meeting with Russian President Vladimir Putin was a step in the right direction that could change the future of Greece and of the entire European Union.

Remarkably, Vladimir Putin offered Greece a highly lucrative deal – to take part in Moscow's Turkish Stream pipeline project – that would allow the Balkan country to become one of the main power distribution centers in Europe.

In his turn, Tsipras pledged to oppose any new sanctions against Russia, sparking outrage in Washington, that denounced Greece as a "Trojan Horse" used by Russia to return to the EU orbit, the researcher remarked.

However, Achilles Heels and Trojan Horses do nothing to solve the economic problems of Greece and the financial crisis the European Union will inevitably face soon.

"What no one in Berlin, Paris or Rome dares to address is the reality that the European Union countries are dying. Demographically, economically and morally they are in a death agony downward spiral."

© Flickr / John Riviello
New Ties Challenge Old Allies: China and Greece Compete With US, EU
The EU should make a "definitive break" with the bankrupt US dollar-dominated world and turn to the East, joining the Eurasian Economic Union initiative and China-led New Silk Road project. Otherwise, Europe will eventually bite the dust, "choking in its own debt and economic depression as is Greece today," the historian warned.

"The only other option open at this time, the option of the status quo financial powers that be, was tried in Nazi Germany, Vichy France and Mussolini Italy in the 1930s. We don’t need to try that again," F. William Engdahl concluded.