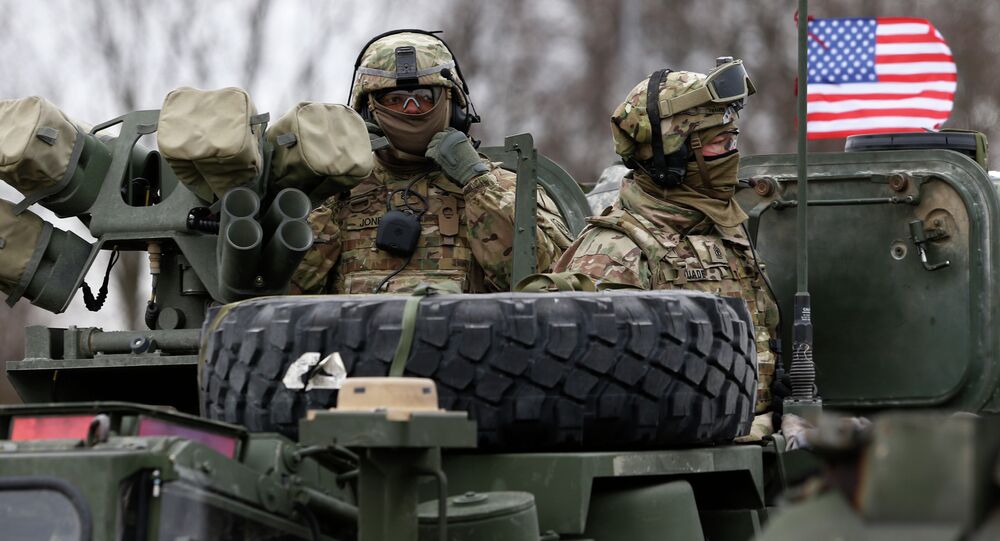 Amid NATO's growing military presence in Eastern Europe, it's worth taking a moment to consider the kinds of talking points the organization uses to explain away some pretty obviously belligerent and expansionist behavior.

With NATO's beefing up of its presence in the countries of Eastern Europe and the former Soviet Union, with more troops, a bevy of exercise activity and macho US troops parading across Eastern Europe, it's worth taking a moment to consider the kinds of arguments the organization uses to explain away some pretty obviously belligerent and expansionist behavior.

A neat policy document released late last year entitled "Russia's Top Five Myths About NATO" contains pretty much all the mantras the organization uses to explain away Russian fears, prove its peace-loving nature and continue its buildup in the region. The neat and tidy talking points go about their merry way in explaining why Russia is always wrong and why NATO has every right to do what it's doing. In fact there's only one criticism to be made of the 'Top Five Myths': every one of them can be easily tripped up by anyone with an elementary knowledge of history and a sliver of common sense.

Russia's Myth #1, according to NATO, is that Western leaders "promised at the time of German reunification that the Alliance would not expand to the East." In fact, the fact sheet says, "no such promise was ever made, and Russia has never produced any evidence to back up its claim." The document goes on to note that there was no written record of the decision, notes that Eastern European countries couldn't join NATO anyway at the time due to the existence of the Warsaw Pact, and quotes retired Soviet leader Mikhail Gorbachev, who it is claimed had never discussed NATO expansion with Western leaders. The talking point notes that "when the countries of Central and Eastern Europe applied for NATO membership, it was of their own free choice, through their own national democratic processes, and after conducting the required reforms."

But no matter how much the NATO document's authors might try and squirm regarding some uncomfortable truths, and no matter how much Russia's present leaders and policy analysts might kick themselves over Gorbachev's foolishness in failing to get a written agreement from the US on NATO expansion, facts remain facts.
Back in 1996, Gorbachev wrote in his massive 750 page tome Memoirs that "during the negotiations on the unification of Germany, they gave assurances that NATO would not extend its zone of operation to the east."

And the ex-president would repeat the assertion in 2009, this time with a commentary, telling German newspaper Bild that "[German Chancellor] Helmut Kohl, US Secretary of State James Baker and others assured me that NATO would not move an inch to the east. The Americans did not fulfill their promise, and the Germans showed indifference. Maybe they even rubbed their hands in satisfaction over how they had managed to put one over on the Russians. But what has this given us? Only that the Russians no longer believe in the assurances of the West."

© Wikipedia / NormanEinstein
NATO Official's Derisive 'Geography Lesson' for Russians Gets Maps Wrong
Russia's Myth #2, NATO says, is that "Russia has the right to demand a '100% guarantee' that Ukraine will not join NATO." The organization cites Article 1 of the 1975 Helsinki Final Act, which states that countries have the right to belong to any international organization, to sign any treaty and to be party to any alliance. "In line with those principles, Ukraine has the right to choose for itself whether it joins any treaty of alliance, including NATO's founding treaty."

First of all, it takes a lot of chutzpah for an organization to cite the Helsinki Final Act, given NATO's repeated violations of the document's provisions on European security in the former Yugoslavia throughout the 1990s, first during the Slovenian and Croatian declarations of independence in the early 1990s, and then following the war in Kosovo at the close of the decade.

Second, throughout the 1990s and to the present, Russia has abided by the legal framework outlined at Helsinki, and Russia does stand by the idea that Ukraine, or any other country, has the legal right to choose which organizations, including security treaties, it joins. But what Russia does not agree to is the idea that a small group of protesters, backed by armed bands of radical nationalist revolutionaries, can seize power, overthrow the democratically elected government, and proceed to forcefully tear two nations with a thousand years of cultural, linguistic, economic and other ties apart from one another by force, all with the direct support of the US State Department.

© Sputnik / Maksim Blinov
Documents Reveal Covert US, UK, NATO Propaganda War in Ukraine
Russia will continue to abide by the international security agreements it has signed, including the 1975 Helsinki Final Act, signed by its legal predecessor, the Soviet Union (then led by a Ukrainian –Leonid Brezhnev, incidentally). But the Russian Bear's strong sense of restraint today does not mean that every Tom, Dick and Harry should just endlessly do all they can to move closer and closer to the bear's cave and to taunt it by thumbing its nose, sticking out its tongue or waving some other body part in its face to see how long it takes for the animal to snap.

With regard to Russia's Myth #3, which is that "NATO has advanced its infrastructure toward Russia's borders," the NATO document basically just admits that it's not really a myth at all. And how could they? Their own PR officials have been playing up the organization's growing involvement in states bordering Russia, while their armies brazenly carry out parades 300 meters from the Russian border. The document just listlessly cites the 1997 NATO-Russia Founding Act on Mutual Relations, and notes that it has proceeded to advance its infrastructure towards Russia's borders with "transparently and in full accordance with the Founding Act."

Russia's Myth #4 is similarly puerile. According to the 'Russian myth', "NATO's response to the Russia-Ukraine crisis and its reinforcement of Allies in Central and Eastern Europe breaches the Alliance's international commitments." Perhaps the rocket scientists working on the document couldn't think of five actual myths, so they snuck this one in at number 4. A quick googling of this myth's phraseology yields only NATO's own statements of Russia's alleged 'violations of its international commitments' and, incidentally, a statement by Jack Matlock, the last US Ambassador to the Soviet Union, who notes that the West did give the Soviet leadership a "clear commitment" not to expand east.

© Flickr / Antonio C.
NATO-Russia Cooperation Just 'Shadow From 90s' - Political Activist
Saving the best for last, NATO's Russian Myth #5 is that "NATO has a Cold War mentality." The document offers a one sentence summary of the Cold War as a conflict "characterized by the opposition of two ideological blocs," and notes that Russia no longer has "a credible ideology to export, nor significant international allies who support its aggressive actions in Ukraine." Combined with the various NATO-Russia partnership initiatives, this means that NATO cannot possibly be stuck with a Cold War mentality.

Unfortunately, the argument falls flat on its face by the beginning of the sentence about ideological blocs. Yes, Russia is no longer communist. Yes, it no longer has pretensions for a global revolutionary movement uniting the world's proletariat and creating a global workers paradise. Yes, Moscow does not even show any willingness or ability to hold an Eastern European buffer zone to defend against nations which have attacked it three times over the last century.

Nearly a quarter of a century has passed, but despite all the cooperation agreements, all the promises of a Europe from Lisbon to Vladivostok, all the feel good riffs and lyrics by the Scorpions and Billy Joel, NATO is still there. This year marks the 70th anniversary of the end of the Second World War. Several generations with no memory of the war apart from what their grandparents or the History Channel have told them have grown up, but US bases, across Germany, Italy and Japan, remain. Russia, first out of weakness and then out of politeness and trust toward its partners, has stood idly by while NATO expanded, first into Eastern Europe and then into the states of the former Soviet Union. Now NATO is giving equipment and training support for the Ukrainian military of post-coup Kiev, in the very heart of Kievan Rus'. And still, Russia is the security threat? Sorry comrades, but Russia's not the one maintaining a relic of a security organization formed three generations ago and charged with defending against Russian hordes waiting to break into the West German plains.

Russia wants WAR..look how close they put their country to our military bases #munkdebate pic.twitter.com/7SUXndvtvi