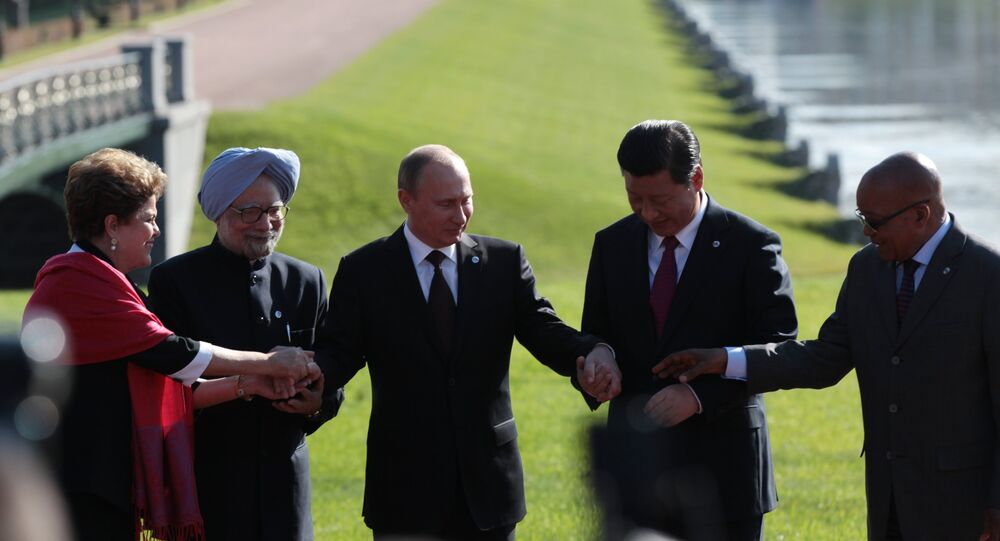 Russia's Cabinet of Ministers approved this week the ratification of an agreement to create a pool of conditional currency reserves for BRICS member states, a move that experts believe will help create an institute to rival the International Monetary Fund (IMF).

Fotohost agency
Russian Commission Ratifies BRICS Currency Reserves Agreement at $100Bln
MOSCOW (Sputnik) — The agreement establishing a New Development Bank (NDB) of emerging economies and a reserve currency pool in the amount of $100 billion was worked out by the five member states in 2012 and signed last summer at the sixth BRICS Summit in Brazil.

According to the agreement, China is expected to contribute the largest share to the pool at $41 billion, with Russia, India and Brazil chipping in $18 billion apiece, followed by South Africa at $5 billion.

Reinaldo Goncalves, economics professor at Rio de Janeiro Federal University, believes the NDB and the currency pool gives its largest contributor an effective means of exerting pressure on other members of the monetary fund.

© AFP 2021 / Takaki Yajima /POOL
China-Led Development Bank Establishes New Multipolar Economic Order
"China, with the help of this tool, can do the same as the United States does with the IMF, that is, use the fund as an economic instrument of foreign policy," Goncalves told Sputnik.

"It is hard to overestimate the value of the contingent currency pool as an investment platform… Despite the fact that the IMF has a comparable mechanism, it lacks similar liquidity," Chen told Sputnik.

The BRICS' New Development Bank is expected to become one of the largest multilateral development institutions in the world with an independent lending policy from its headquarters in Shanghai.

Russia assumed this year's chairmanship of the informal intergovernmental association established in 2010, which makes up two-fifths of the world's population and one-fifth of its GDP.

Putin to Meet With Argentinian President on April 23 in Russia

Argentina to Remain Outside BRICS in Near Future