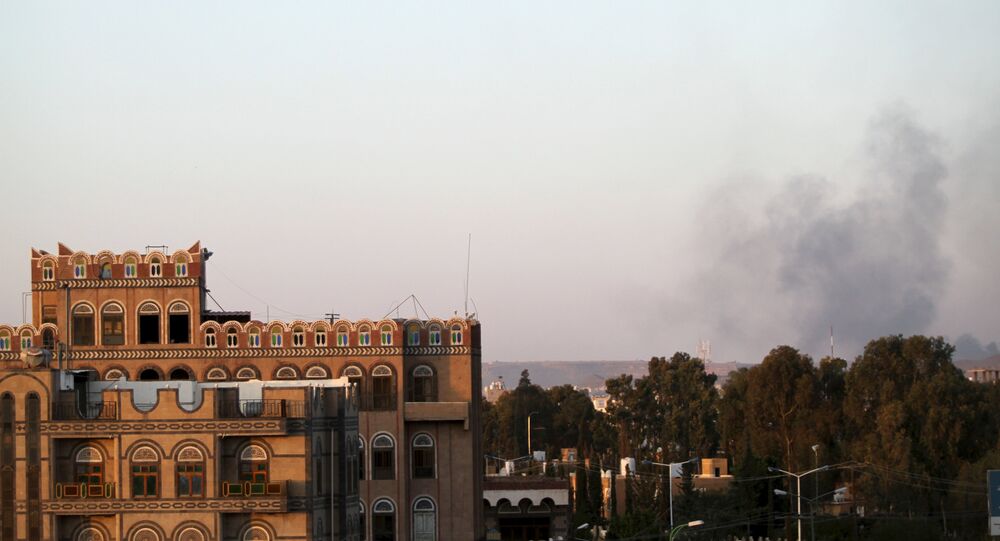 An award-winning author and geopolitical analyst spoke to Sputnik about Saudi Arabia’s involvement in Yemen and its’ push to expand the war by involving troops from other Arab countries.

© REUTERS / Stringer
Saudi-Led Coalition May Carry Out Limited Ground Campaign in Parts of Yemen
Mahdi Darius Nazemroaya an award-winning author and geopolitical analyst, who is also a member of the Scientific Committee of Geopolitica, spoke to Sputnik about the Saudi led coalition in Yemen.

Nazemroaya said that all military experts around the world including American ones and the ones in the Middle East agreed that airstrikes are never enough to defeat any force.

He also mentioned Libya saying that in that country airstrikes were not enough either. “You need operations on the ground”.

“The Saudis would be very foolish to embark on the ground operations. It will be their Vietnam in the Middle East, in the Arabian Peninsula. I can categorically tell you that airstrikes are not enough to stop any military action on the ground.”

He said that in fact Houthis have basically taken over Aden in the south and because of that he feels that Saudis are going to try and expand the war and bring in troops from Pakistan or mercenaries from other parts of the world.

“They might come under the flag of Saudi Arabia but they could be mercenaries and recruits from other parts of the world.”

He further elaborated, “They are pushing for the Egyptians to get involved. So alongside Saudi Arabia we have some countries that are nominally involved, their involvement is a token to make this look like a Pan-Arab operation, like it has a wider international support.”

Jaded Democracy, the American-Egyptian Reconciliation, and the Arab NATO
He spoke about how Saudi Arabia will push to expand the coalition to get troops from other places. It is unknown whether there will be private security contractors or their own, but the coalition will likely expand.

He also said that he is quite certain that Saudi Arabia will push the Egyptians to get troops into Yemen, which according to him, would be a disaster because Egypt in the past did send troops to Yemen decades ago and it proved to be a disaster.

“It is going to be a disaster for Saudi Arabia. Back in 2009 and 2010 they invaded Yemen to fight Houthi and they lost. Houthi started taking over parts of Saudi Arabia.”

© AP Photo / Staff Sgt. Shawn Nickel
War Buddies: US to Refuel Saudi Jets Used in Yemen Airstrikes
Southern Saudi villages were actually taken over by the Houthi. So if they want to repeat a failed policy they are going to send troops on the ground into Yemen.”

“Any Arab county that gets involved in Yemen is going to create domestic instability, regional instability and ultimately it will hurt Saudi Arabia. It does not have the military capabilities to invade and occupy Yemen. Hence, they will push to broaden the war and get other actors involved. There are already others involved.”

Talking about other members he said that the US is already a member, there have been reports that Israelis have been helping them in the bombings.

“In fact in the past Saudi Arabia and Israel had an alliance where the Israelis were providing arms to the Saudis to provide to the Royalists in the northern Yemen during the Cold War, to create pressure on southern Yemen which at that time was allied to Moscow during the Cold War. So I mean there are broader interests involved,” Nazemroaya said.

What role should Western countries play in the Saudi-Yemen conflict?