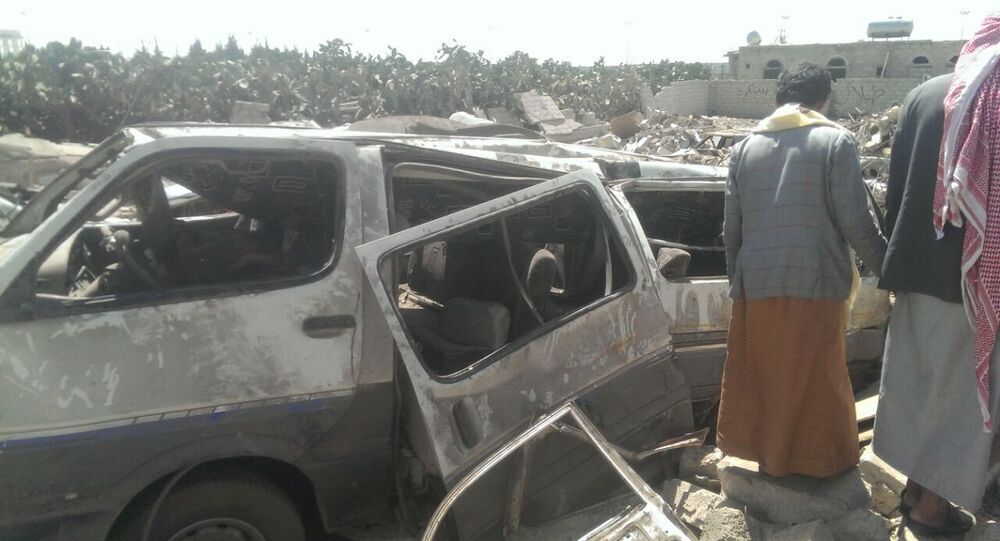 The latest violent chain of events in Yemen not only represents a game-changer for the country itself but also a grave threat for Saudi Arabia and other Gulf states, experts told Sputnik on Thursday.

What may seem to be a purely local conflict between Zaidi Shiites and former President Ali Abdullah Saleh's supporters on one side and ousted President Abd Rabbuh Mansur Hadi's backers on the other side, could spread all over the Gulf, just as the events of the Arab Spring showed, experts say.

The Houthi movement was founded in 1992 as a purely theological one. The Houthis which belong to oldest branch of the Shia movement, the Zaidi, promoted tolerance at first, yet embarked on a path of open confrontation with government forces in 2004, eventually leading to the capture of the presidential palace in Sanaa by Houthis in January 2015.

© AP Photo / Cliff Owen
Failing US Mid-East Policy Likely to Cause Proxy War in Yemen - Senators
Yezid Sayigh, senior associate with the Carnegie Middle East Center explained how a 1,000-strong group (as of 2005) managed to gather more than 100,000 supporters in just five years.

"The Houthis started as a social movement working against the corruption of the elite factions that have dominated Yemeni politics, economy, and public finances for several decades. So, they have the support of significant number of people who are fed up with the entire ruling system — these include some youth, intellectuals, leftists and even some tribes and other poor people," Sayigh told Sputnik.

As for the reasons behind the group's military success, the Carnegie Middle East Center's senior associate elaborated that the weakness of the country's regular armed forces, "resulted from massive corruption and elite rivalries," and support of former president Ali Abdullah Saleh's more competent army units.

Adam Baron, visiting fellow with the European Council on Foreign Relations (ECFR), added that the group's "key asset is their personnel — the Houthis have a large number of well-trained fighters."

This could possibly explain why Yemeni President Abd Rabbuh Mansur Hadi fled from the country by boat on Wednesday.

Sayigh sees the first phase, which is "still unfolding," as a combination of 2003-2011 events, the US invasion in Iraq, the Syrian departure from Lebanon and the Arab Spring.

"Now the systemic crisis is extending to new areas: it will not only affect Yemen, but also Saudi Arabia which has deepening sectarian problems," the expert concluded.

ECFR's Adam Baron noted that the Saudi-led operation itself, not to mention the internal conflict in Yemen, "threatens to reverberate across the region, heightening tensions in hotspots where Saudi Arabia and Iran are competing for influence."

The self-immolation of Tunisian street vendor Mohamed Bouazizi in December 2010 eventually led to massive protests, government overthrows and civil wars in 20 countries across the Middle East with a death toll reaching almost 250,000.

What the exact outcome of Sunni Saudi Arabian-led airstrikes against Shia militants in Yemen, will be is still unclear. But the danger these events are carrying is evident.