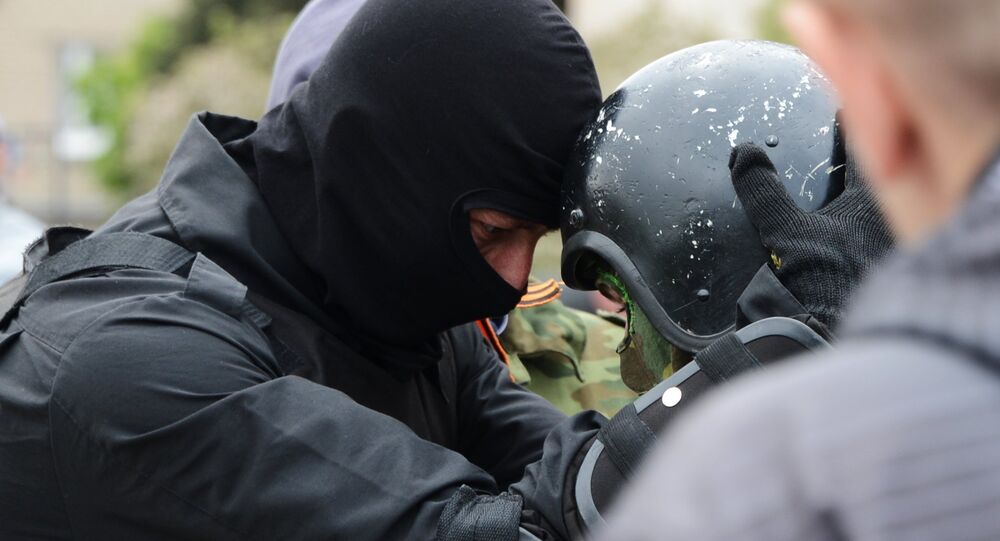 Ukraine's private battalions funded by oligarchs pose a severe threat to the country's integrity, warns analysts, adding that the conflict between the Ukrainian President and notorious tycoon Kolomoisky could lure the state into chaos.

A dispute over control of two Ukrainian energy companies, UkrTransNafta and Ukrnafta, could bring the country on the verge of collapse, noted Andrew E. Kramer and David M. Herzenhorn, the columnists on amercian newspaper.

The problem emerged after Ukraine's Verkhovna Rada passed a law last week reducing Kolomoisky's power as a minority shareholder in the two companies. Furthermore, the legislation has given the green light to a management change, previously blocked by Kolomoisky.

In response, Igor Kolomoisky, a longstanding ally of the Poroshenko regime, seized the headquarters of the companies and warned that on his command almost 2,000 armed men could be brought to Kiev.

© Sputnik / Alexander Maksimenko
No Ukrainian Governor Will Be Allowed to Have 'Pocket' Army - Poroshenko
It is worth mentioning that after the February 2014 coup the oligarch formed and funded Ukraine's paramilitary forces aimed at suppressing eastern independence fighters. According to some estimates, Kolomoisky's Dnepro Battalion is comprised of 2,000 battle-ready fighters and another 20,000 in reserve.

Amanda Taub, journalist and former human rights lawyer, stresses that militia forces, raised by the oligarch, pose a substantial threat to the country's fragile government. Other oligarchs may also use private paramilitary forces in order to protect their interests from Kiev's interference, they pointed out. There are about 30 private "volunteer" militia battalions currently involved in the armed standoff in eastern Ukraine.

Some of them, like the Aydar Battalion, have been slammed by international human rights groups for hideous war crimes committed against Ukrainian peaceful civilians.

As militias grow stronger, experts suggest that Ukraine may soon face a "warlordism" phenomenon: private armies and their wealthy patrons could split the country into numerous fiefdoms, ultimately undermining Ukraine's integrity and political stability. It should be noted that Ukrainian tycoon Igor Kolomoisky is also a governor of Dnipropetrovsk, one of Ukraine's most important industrial regions and the country's fourth-largest city.

© AP Photo
Poroshenko Sends Two Army Battalions to Dnepropetrovsk Amid Oligarchs' War Over Oil Company
Meanwhile, on Monday, the Ukrainian President claimed that all "volunteer battalions" would be integrated into Ukraine's regular ground forces in an official statement published on his website. In his turn Valentin Nalivaichenko, the chief of the Ukrainian security service, told journalists Monday that armed people which occupied the buildings of UkrTransNafta and Ukrnafta would be arrested.

However, it seems that Petro Poroshenko does not hold enough power to restrain the notorious oligarch. Indeed, the raid on the oil company instigated by Kolomoisky has already worked: Petro Poroshenko agreed to install a temporary chairman for UkrTransNafta, who would not conduct any investigations into the company's finances. So far, the deal between Kolomoisky and Poroshenko shows that the oligarch may use his private army to protect his business with total impunity, analysts stress, pointing to the evident weakness of the Kiev regime.