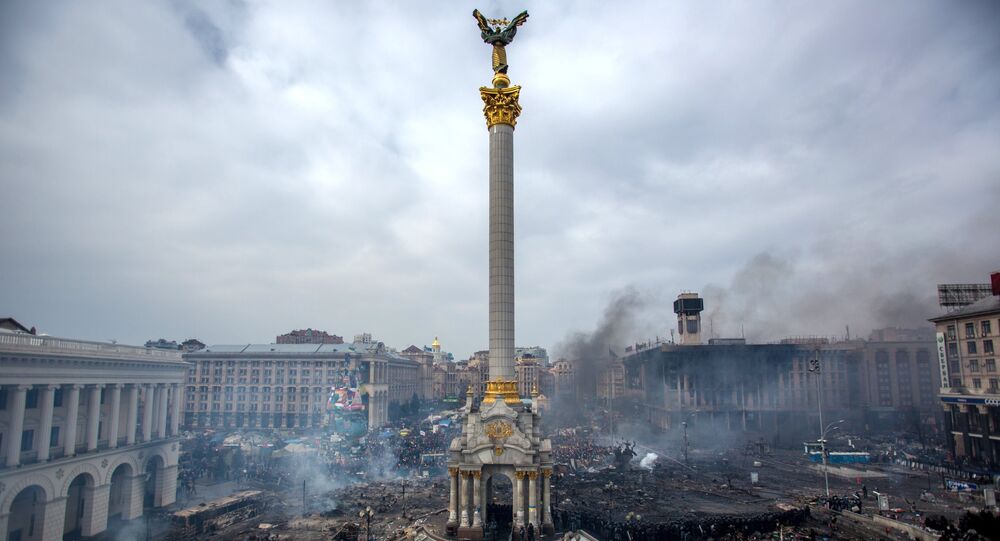 Ulrich Kühn, German political expert, described several possible scenarios for the further development of the events in Ukraine and assessed prospects for the settlement of the conflict in an exclusive interview with Sputnik.

Anastasia Raevskaya — The Ukrainian crisis, which started in autumn 2013 with a division in Ukrainian society, developed into a full-scale military conflict, claiming lives of nearly 6,000 people, making the country a hotbed of political instability and raising security concerns among neighboring European countries.

“I would not speak of a mere ‘crisis’ anymore because that would be blurring the facts. In Ukraine, on the ground, we have a full-fledged war,” Ulrich Kühn, a Research Fellow from the Institute for Peace Research and Security Policy at the University of Hamburg, told Sputnik.

© AP Photo / Efrem Lukatsky
Kiev Forces Demonstrate 90% Adherence to Minsk Ceasefire
According to the expert, the settlement of the war in Ukraine depends first of all on the full implementation of the ceasefire agreement, signed by the participants of the Trilateral Contact Group on February 12, in Minsk.

The new Minsk agreement, also known as Minsk-2, foresees a package of measures to diminish violence and reduce fighting in the country, including withdrawal of heavy weaponry by Kiev forces and militias in the south-eastern regions, constitutional reform in Ukraine and special status for Donetsk and Luhansk People’s Republics, an exchange of prisoners, as well as pullout of all foreign military formations from the territory of the country.

“If the ceasefire turns out to be stable and if the Ukrainian government will be able, in a subsequent step, to start a constitutional reform which takes into account the valid rights of its Russian-speaking minority, the war in Ukraine could be ended,” Kühn claimed.

© Flickr / Medien Bundeswehr
Germany, NATO at Loggerheads Over Ukraine Crisis
On March 10, Kiev troops have reportedly pulled out all heavy weapons from the contact line in the eastern regions of Ukraine. Donetsk and Luhansk People’s Republics announced the withdrawal of their artillery was finished on March 1.

However, speculations about a possible redeployment of heavy weapons by both sides as well as the armed clashes in the city of Debaltseve, late February, show that the truce remains very shaky and that its implementation will be a very difficult task for all parties involved.

According to the expert, there are three possible scenarios for further development of events in Ukraine:

Scenario 1: The truce proves to be stable.

In this case, Ukrainian authorities are able to carry out constitutional reforms, representing, among others, the Russian-speaking minority’s interests. Donetsk and Luhansk self-proclaimed republics receive a special status with a veto power over important foreign and security policy decisions of Kiev, while Western countries incrementally lift their anti-Russian economic sanctions and cooperate with Moscow to support the Ukrainian economy. The probability of this happening is about 20%.

© Sputnik / Sergey Guneev
UN Stays Focused on Minsk Agreements, Humanitarian Aid Delivery to Ukraine
If this scenario comes true, armed clashes will continue to occasionally occur in south-eastern regions of the country. Ukrainian authorities are not able to carry out the necessary constitutional reform, the country’s economy breaks down and the number of refugees, fleeing to neighboring countries, dramatically increases. Western countries will strengthen their sanctions against Russia, which will have negative impact on Russia’s economy in the long run and contribute to the deterioration of relations between East and West. This scenario has a 60% chance of becoming a reality.

Violence erupts again and armed clashes in south-eastern Ukraine become more frequent. Western countries heavily increase anti-Russian sanctions and start arming the Kiev forces. Moscow, for its turn, lends military support for fighting militias. Consequences of this scenario may be significant, leading to the deployment of additional defensively-oriented NATO forces in Eastern Europe and increasing Russia’s isolation from Western countries. The chances of this scenario coming true are around 20 percent.

The settlement of the Ukrainian military conflict, Kühn argues, requires a high degree of compromise from all conflict parties, non-involvement of external armed forces as well as sustainable economic support from Western countries and Russia.

© REUTERS / Valentyn Ogirenko
EU to Lift Anti-Russia Sanctions Only After Minsk Accords Fulfilment
Russia should “work together with the West to support the Ukrainian economy,” while Western states ought to “shy away from exclusive approaches towards integrating Ukraine in the EU economic space but instead seek joint efforts together with Russia,” Kühn said.

The cooperation between Russia, the EU and the US is, however, difficult to realize as relations between Western states and Russia have dramatically deteriorated since the beginning of the Ukrainian conflict. Western leaders blamed Russia for playing a negative role in the internal crisis in Ukraine and imposed several rounds of sanctions against Moscow, while Russia repeatedly denied the accusations and claimed its non-involvement in the military conflict.

“The conflict between the West and Russia will not be overcome smoothly — even if the war in Ukraine comes to an end,” Kühn said. He described this confrontation as “fundamental,” arguing that it is likely to last at least for the next years if not decades to come.

Germany, France Talks With Ukraine Give Hope for Success in Peace Process