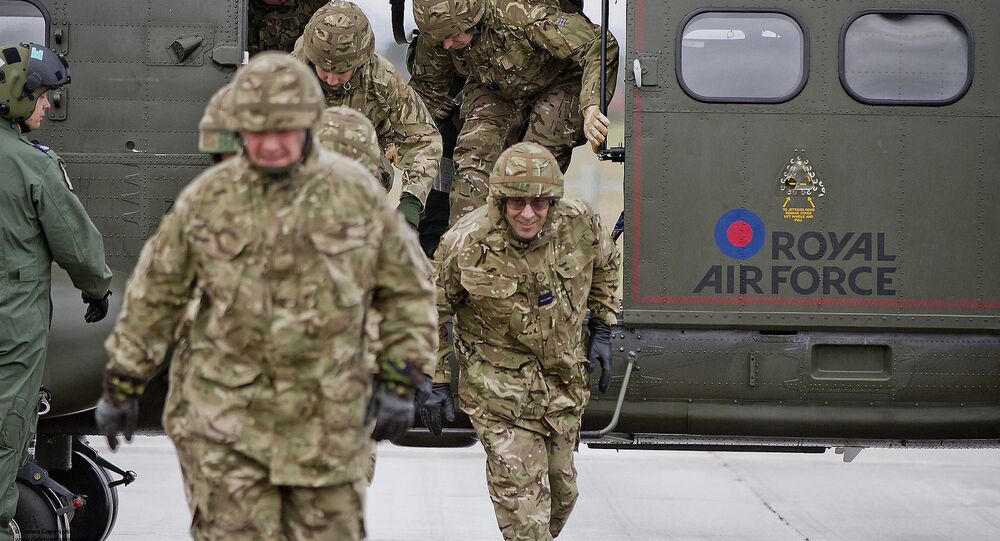 It has been revealed that the British government had approved the sale of £16m of crowd-control and anti-riot equipment, including tear gas and rubber bullets, to countries whose regimes are on its own human-rights blacklist.

The UK is determined to remain one of the world leaders in the exports of arms and defence-related products and services. It is a highly lucrative market where issues of ethics take a back seat to profits.

Some 110,000 jobs in the UK depend on UK defence-related exports; the country has been 6th on the list of the world's arms exporters over the past few years while the overall value of those exports amounted to a hefty £13 billion in 2013.

The latest piece of news about British arms sales comes as the Royal United Services Institute (RUSI) is hosting a so-called Whitehall Dialogue under the title Developing a Sustainable Export Market for UK Defence. The Dialogue brings together representatives of big and small defence contractors and is closed to the media.

The gathering at RUSI follows last summer's revelations about Britain's arms exports being in stark conflict with government regulations.

It transpired that in 2013 the UK sold £12.3 billion worth of arms to 28 countries about which London had concerns over civil or human rights or had 'tense relations' with.

The runaway leader on the list is Israel which secured £7,879m worth of defence-related deals in the UK. It is followed by Saudi Arabia (£1,863m) and China (£1,486m). It transpired that there were three existing contracts for Syria despite London's blanket opposition to the Bashar al-Assad government and the fact that the UK had been sending equipment to anti-Assad rebels.

An outcry was also caused by revelations that, in apparent contravention to Prime Minister David Cameron's statements earlier in the year, Russia was also receiving military-related goods from Britain — despite 'tense' relations between London and Moscow over Ukraine.

However, what was also revealed was how little Russia in fact depended on military-related imports from the UK: the volume of supplies was limited to a mere £86m. Over the last 15 years Moscow has signed only 10 arms procurement contracts of any significance with other nations, most notable of them the stalled contract for two Mistral landing ships with France.

Meanwhile, questions were asked in the British Parliament why Saudi Arabia, one of the biggest recipients, was included in the UK's list of priority arms markets while also being on the Foreign and Commonwealth Office list of countries of 'major human rights concern'.

Another major controversy surrounds Britain's close cooperation in defence-related matters with Bahrain. Besides sales of arms, the UK is now building a permanent naval base there thus cementing its links to the Sunni monarchy ruling a predominantly Shia country.

Bahrain's record on human rights has been causing wide-spread concern internationally since 2011 when the government came down heavily on the opposition.

In announcing the agreement to build the base in Bahrain in late 2014 the UK government made no mention of human rights in that country. The UK government was accused of dishonesty over tacitly relaxing arms export controls while refusing to admit so openly.

Ukraine is likely to be the latest country in UK arms exporters' sites even though any future contracts would be highly controversial in view of the armed conflict in the country. In fact, the UK has already gifted Ukraine £850,000 worth of 'non-lethal' military supplies. Besides, several dozen British instructors are to be sent to Ukraine this month, as announced by Prime Minister David Cameron.

Considerable controversy has most recently been caused by the delivery to Ukraine of several dozen decommissioned British-built Saxon armoured trucks.

General Sir Richard Dannatt, Chief of the British General Staff between 2006 and 2009, described the trucks as 'quite useless' and the deal as 'nothing short of immoral'.

General Dannatt's views on the matter carry a great deal of weight as it was he who ordered the Saxon troop carriers to be scrapped from service. However, 20 trucks have already been delivered to Ukraine with another 55 expected to arrive soon — at £50,000 apiece. Though the trucks were never meant to be used in combat operations, Ukrainian commanders have said they want to mount guns on the Saxons and deploy them in their fight against the independence supporters in the East of the country.

In its preamble to the Whitehall Dialogue the RUSI website said the event was taking place in a situation when defence budgets in the western world continue to decline, making defence-related exports particularly important in securing commercial viability of defence businesses. According to RUSI:

"International competition in defence equipment is becoming still more intense, with US primes leading the way with strong political backing from the US administration."

The RUSI event's keynote speaker Geoff Hoon, who formerly served as Secretary for Defence and then Transport Secretary, is of course well placed to oil the wheels of cooperation between the UK government and defence industry.

Not a stranger to controversy in his time in government and Parliament, Geoff Hoon in his current post of Managing Director of Business at Augusta Westland must have been instrumental in securing the company's permission to make a bid, to rival the US Boeing, for a multi-billion-pound deal to replace the UK Army's fleet of Apache helicopters.

On the matter of 'declining defence budgets in the western world', the US has been pressing its European allies in NATO to beef up their expenditure. Earlier this month Chief of the US Army Staff General Raymond Odierno voiced his concern about the falling proportion of the UK's national wealth being spent on the military.

US military chiefs have on more than one occasion warned that the UK would not be able to be an 'effective ally' in fighting wars of the future.

"Britain has the fifth-largest defence budget of any country in the world and the second-largest in Nato. We are a very strong partner for the US."

And the UK Ministry of Defence said the government was committed to spending 2% of GDP on defence.