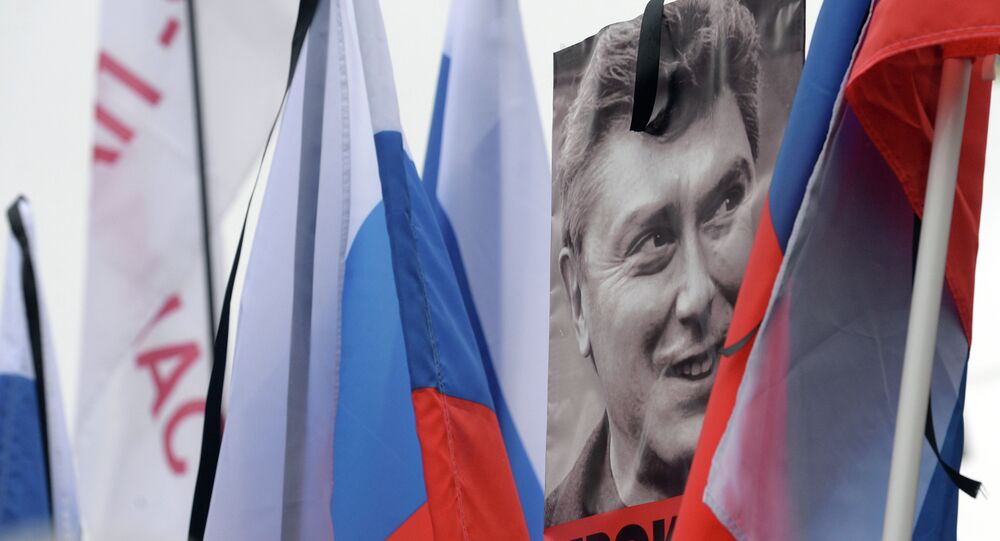 Ilias Iliopoulos, a Greek defense analyst, asks who stands to benefit from the killing of Boris Nemtsov, noting that it isn't the Russian government.

© Fotobank.ru/Getty Images / Win McNamee
Senators Urge Obama to Support Independent Nemtsov Murder Investigation
Pondering the murder of Russian opposition politician Boris Nemtsov, Greek historian and security analyst Ilias Iliopoulos believes that policy experts and representatives of the media must ask themselves the simple question 'cui bono' (who benefits) from such a brazen attack in the center of the capital.

"As an analyst in the field of international politics, I am struck by the fact that Washington, Brussels and the mass media they control has so quickly jumped to blame the leadership of the Russian government and President Putin personally for Nemtsov's murder. [They did so] without any facts or serious studies," Iliopoulos noted, speaking with RIA Novosti in an interview published Thursday.

"Logically-minded persons, and especially politicians and political analysts, understand that President Putin does not and could not have anything to do with the murder. Everyone with an understanding of Russian history and politics knows that Nemtsov was on the absolute periphery of Russian politics for at least the past 15 years. His countrymen had turned against him, and they had reason to do so," Iliopoulos noted, referring to Nemtsov's political association with 90s' era political forces (including President Boris Yeltsin, Viktor Chernomyrdin, Anatoly Chubais and Boris Berezovsky) which had brought Russia to the brink of total economic, social and political collapse.

© Sputnik / Ekaterina Imasheva
Ford Seen At Nemtsov Murder Scene Was Security Car Being Used as Gypsy Cab
"Surely nobody truly believes that President Putin, who saved Russia from disaster, who put the country back on her feet again, would need to even seriously worry about, much less consider the murder of a person who said that Crimea should be returned to Russia's enemies," Iliopoulos added.
"Nemtsov had links with foreign politicians; he visited former American Ambassador to Russia Michael McFaul in 2012. We know that Ambassador McFaul had a very specific task –to plan, coordinate and launch an 'orange revolution' type scenario, this time in Russia, according to the type found in Serbia, Georgia, Libya and so on, in order to overthrow the elected Russian leadership," the analyst noted.

Murder Could Be Used in Attempt to Destabilize Country

Iliopoulos noted that he is "deeply concerned about the ongoing efforts of the countries of the West –that is, the United States and the European Union, to destabilize Russia. I am concerned by the escalation of the psychological and anti-Orthodox war being carried out by the US and its European satellites against Russia under the guise of Nemtsov's mysterious and bloody murder."

"Let's ask again –who benefited from these developments?" Iliopoulos asked rhetorically. "It is clear that it is those forces in the West, which seek to inflict a political and psychological blow to Russian society and to cause an 'orange revolution' like the one in Maidan."

The expert also noted that he could not rule out that the murder may have been economically motivated: "I cannot exclude that Nemtsov may have been killed by his former associates, people connected to economic crimes and corruption, keeping in mind that he worked in banks and companies regularly involved in scandals."

What do you think is the most important event of the week?
Voted: 984
All polls
On Wednesday, President Putin noted that Russia must forever rid itself of the tragedy and shame surrounding politically-motivated crimes. "The most serious attention must be given to high-profile crimes, including those that are politically motivated. We must finally rid Russia of the tragedy and shame like the one we recently witnessed and experienced [with] the brazen murder of Boris Nemtsov, right in the center of the capital," Putin said. Speaking at a meeting of Russia's Interior Ministry on the problem of political extremism, the President added that "the actions of extremists are becoming more and more sophisticated. We are faced with attempts to use so-called 'color revolutionary techniques' –from the organization of illegal street actions to the promotion of open hostility and hatred in social networks." The President noted that "extremists poison society with their militant nationalism, intolerance and aggression. Based on the example of neighboring Ukraine, we know where this can lead."

Ilias Iliopoulos is a lecturer at Greece's National Defense School, the country's highest defense educational institution, and a former analyst at the Greek Ministry of Defense. He is also the former Chair of the Political and Strategic Studies Department at the Baltic Defense College in Tartu, Estonia.