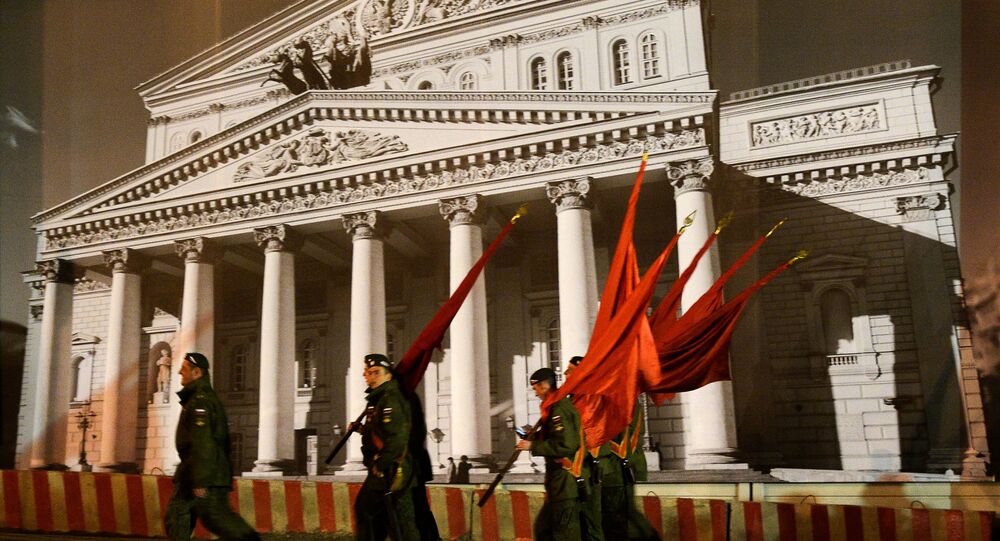 China and Russia promote their own view on the Second World War, destroying myths, created by the West.

Ekaterina Blinova — Beijing and Moscow are planning to hold joint commemorations for the 70th anniversary of the end of the Second World War; experts note the countries are openly debunking historical myths created by West.

© Sputnik / Ramil Sitdikov
V-Day Parade Will Display Only Russia's State-of-the Art Military Hardware
According to experts, the decision of China and Russia to jointly commemorate the historic event should be considered against the background of their war experience.

Both countries sustained severe massive casualties, on a scale that could hardly be imagined by the West. While the war claimed the lives of 418,000 Americans, 600,000 French nationals and 450,000 Britons, the USSR's casualties amounted to 27 million and China's – to almost 20 million deaths.

However, the publicist Paul Letters noted that many more could have been killed by Nazi military forces and their allies in these strategic Eurasian regions. For comparison's sake Germany, who launched the war, lost a total of 7.3 million people while Japan lost 2.7 million, according to some estimates.

© AFP 2020 / ATTILA KISBENEDEK
Vietnam President to Visit Moscow for Victory Day Celebrations
However, since the end of the Second World War many of myths have emerged, distorting historical facts. For instance, some "experts" and media sources speculated that the Nazi concentration camp of Auschwitz was liberated by US Army forces. Furthermore, in 2015 some Polish and Ukrainian public officials openly called into question the role of the Soviet Army in liberation of the concentration camp.

In response, the Russian Ministry of Defense for the first time publicly disclosed reliable historical documents covering the event. The declassified documents indicated that it was the Soviet troops, who liberated 7,600 prisoners from Auschwitz-Birkenau, the most vivid symbol of hideous Holocaust, and expelled Nazi military forces.

© REUTERS / KCNA
Russian Embassy Not Confirming Kim Jong Un's Visit to Moscow on Victory Day
"The West has long been blind to the roles China and the USSR played in the Second World War," emphasized Paul Letters. American youths can grow up thinking that the US's "Flying Tigers" (The 1st American Volunteer Group) won the war in Asia, the publicist warned, stressing that it was the Soviet Union who had been supporting the Republic of China in the period between 1937 and 1942.

Both China and Russia pay great attention to their history and traditional values. They understand the exceptional importance of comprehensive and undistorted information about the past.

"Today, Beijing and Moscow want to promote their own historical — and future — narrative distinct from any Western version," the publicist underscored. "Seventy years ago, Asia's two largest countries ended up on the winning side, and the rest, as they say, is history," Paul Letters concluded.