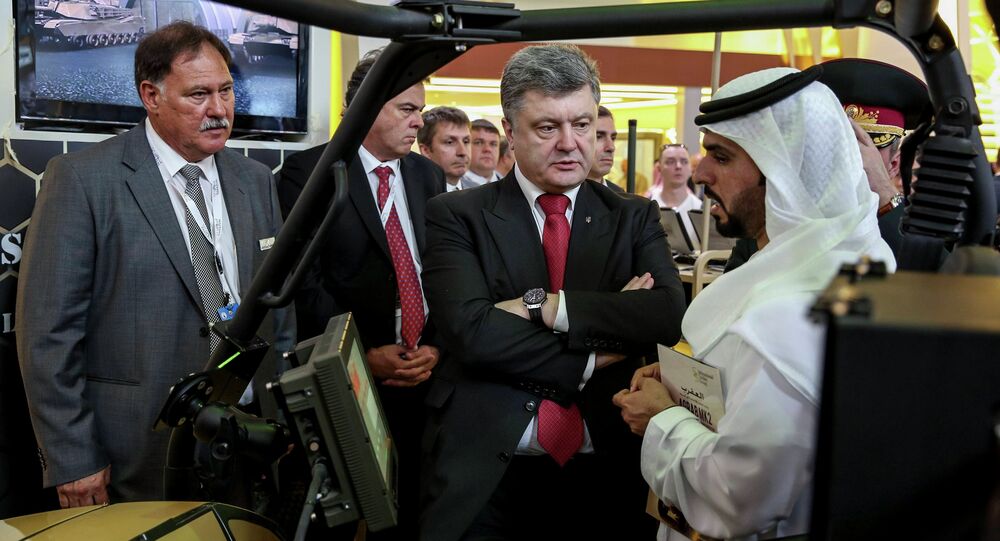 The UAE-Ukrainian military deal is just a backdoor for the United States and NATO to supply weaponry to Kiev's regime, indulging its "warmongering," experts claim.

"Earlier this month it soon became clear that Washington and its NATO allies would pay a heavy political price for an audacious move to openly increase their military involvement in the Ukraine conflict," noted Finian Cunningham, a prominent expert in international affairs.

The expert emphasized that America's "normally servile European allies" expressed their disapproval of Ukraine's arming, since they knew that by indulging the US's militarist ambitions in Ukraine they would inevitably trigger a "political storm across Europe," hit by austerity, unemployment and undesirable consequences of the Western sanctions policy against Russia. Although Washington was obviously unnerved by its NATO allies' stance, it preferred not to risk embarrassing split in the NATO ranks. Instead, it seems to have found "an ingenious way around that problem" by placing the UAE at the front end of the supply chain, Finian Cunningham pointed out.

Indeed, the Kingdom's weapons market has long ago become "a value-adding platform" for Western manufacturers, such as Boeing, Lockheed Martin and Raytheon and a "convenient cover" for the US and EU global arm deals.

© AP Photo / Efrem Lukatsky
Poroshenko's Big Haul: What Exactly Did Ukraine Bring Back From the UAE?
"American and European weapons can thus be sold to parts of the world where it might otherwise be viewed as unethical – thanks to these sales being booked as originating from the UAE," the expert emphasized, adding that the Persian Gulf monarchies including the UAE "are thus in effect NATO arsenals."

So far, Petro Poroshenko's contract with the UAE for "unspecified" military cooperation is just a "back door" for US-NATO weaponry supplies to Ukraine, according to the expert.

Remarkably, an advisor to Ukrainian Interior Minister Arsen Avakov, Anton Gerashchenko wrote on his Facebook page, commenting on the long-anticipated military deal on February 24: "Unlike Europeans and Americans, aren't afraid of Putin's threats of a third world war starting in case of arms and ammunition supplies to Ukraine," adding that he could not disclose items and amounts of supplies. However, in his second post on this very day Gerashchenko praised a Raytheon's Excalibur, a GPS-guided American precision weapon, claiming that the Ukrainian Army would also use it one day.

Poroshenko's Big Haul: What Exactly Did Ukraine Bring Back From the UAE?