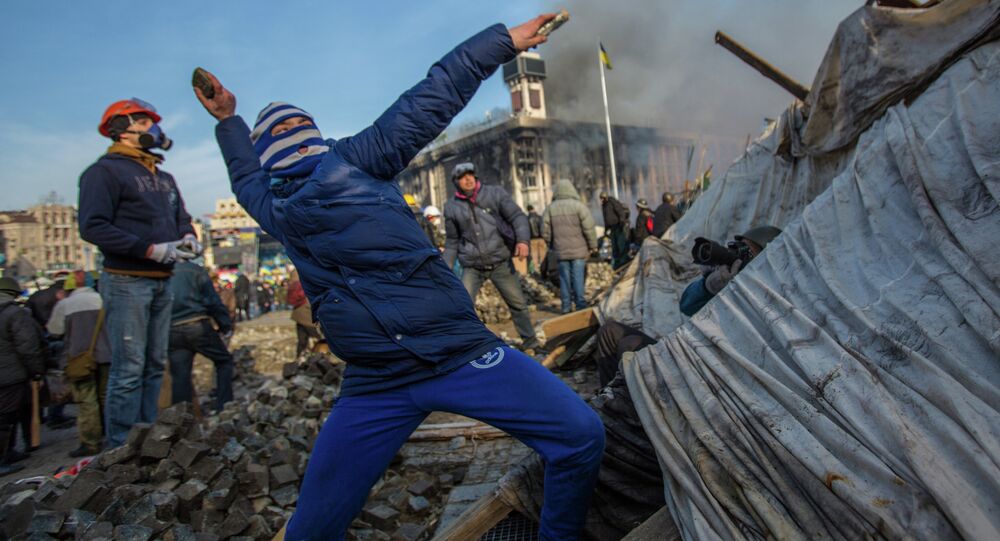 The February 2014 coup d'etat sent Ukraine down the road of total collapse and turned it in a flashpoint. One year after the Maidan turmoil, dreams about full-fledged democracy and European integration are put on the back burner. The current Ukrainian reality comprises a de-facto civil war, economic decline, and dangerous political volatility.

© REUTERS / Valentyn Ogirenko
Poroshenko Booed at Kiev’s Maidan During Ceremony Commemorating Protests
MOSCOW (Sputnik) — The pro-EU protesters' aspirations for a better life and a better government in Ukraine have hardly been fulfilled, experts told Sputnik in the first anniversary of the government coup in Kiev.

Weeks of protests on central Kiev's Independence Square, or Maidan, resulted in ousting of President Viktor Yanukovych and a revolution, which brought pro-Western forces to power.

"The Maidan revolution and its consequences are surely an unmitigated man-made disaster," Vlad Sobell, a professor with New York University, Prague told Sputnik.

Sobell said that over the last 12 months, Ukraine has been "brought to its knees." "The economy is bankrupt, output is falling rapidly, the hryvnya [Ukrainian currency] has nosedived, the political system is once again paralyzed and the country is de-facto partitioned," the professor stated.

© Sputnik / Andrey Stenin
Maidan Madness: How the Virus Infected All of Ukraine (And Might Kill It)
According to Sobell, Ukraine's economy was already on the verge of collapse before the coup. However, the armed conflict with South-East's independence supporters and the lack of clear economic vision have made Ukraine an "economically dysfunctional" state, living on foreign loans, he said.

A year ago, many saw joining the European family as the most obvious way to ease their grievances, thus the suspension of the EU Association deal by Yanukovych faced fierce opposition.

Nicolai Petro, professor of international relations at the University of Rhode Island agreed that the expectation of the people who joined Maidan last year was that the removal of Yanukovych would lessen corruption and improve the overall quality of life.

© Sputnik / Evgeny Kotenko
Looking Back at Euromaidan: Who Benefits From Ukraine's Economic Collapse
"This would then encourage closer integration with the West, which would result in immediate benefits for Ukrainians, such as a visa-free travel. Alas, there was never any realistic possibility that this would happen quickly and without major economic reforms," Petro told Sputnik.

According to Vlad Sobell, the Ukrainians have been "horribly exploited," as post-coup corruption remained rampant and could become even worse than it used to be under Yanukovich.

Worse than the economic troubles Ukraine is currently facing, is the human tragedy. The United Nations estimated that Kiev's military operation against the self-proclaimed People's Republics of Donetsk and Luhansk claimed the lives of over 5,600 people, and wounded twice as many. But professor Vlad Sobell consider these figures to be a gross underestimation.

"German intelligence has put the figure at 50,000, which, I think, is probably still too little," Sobell said. "And of course there are huge numbers of people who have been maimed, traumatized for life and/or permanently displaced."

© Sputnik
Still Not a War? German Intelligence Puts Ukraine Death Toll at 50,000
In a situation where many doubt the viability of the recently signed ceasefire, the prospects of peace in Ukraine are rather bleak, experts point out.

Nicolai Petro puts the ultimate question as "whether the parliamentary majority can muster the votes to deal with the crisis in the economy, constitutional reform, and military situation in the East."

Today's Ukrainian government represents an uneasy compromise among moderates, oligarchs, who backed Maidan to remove Yanukovych from power, and radicals who saw Maidan as a way to reinstate the Ukrainian nation on an ultra-nationalist basis.

One year after Euromaidan. What do you think about last year’s revolutionary events in Ukraine?
Voted: 3
All polls
"While the moderates currently are more prominent in negotiations with the West, nationalistic groups are more prominent in the military operations in Donbas. Ultimately, their agendas for Ukraine do not coincide, and the differences between them have yet to be reconciled," professor Petro said.

The same is true about the actions of President Petro Poroshenko and of the parliament. The two centers of power cannot reconcile on some of the key issues, such as the constitutional reform, which would lead to Ukraine's federalization.

According to Petro, the possibility of new parliamentary elections is looming.

Vlad Sobell also warned that Kiev needs more pragmatism in decision-making. He noted that without a groundswell of opposition in Ukraine's parliament, dominated by a pro-EU coalition, the country is "headed towards neo-totalitarianism."

"The main planks of such a system are already in place: terror by unaccountable… far-right, in some cases openly neo-Nazi, groups, media propaganda and brainwashing, cover-up of true losses of the army and so on. It's up to the West to forestall such developments, but the chance that Brussels, Berlin or Washington will step in to do so are negligible", Vlad Sobell said.

On February 22, 2014, Ukrainian opposition activists seized the presidential administration building in Kiev, paving the way for a government, which in just weeks launched a deadly military offensive against its own people.