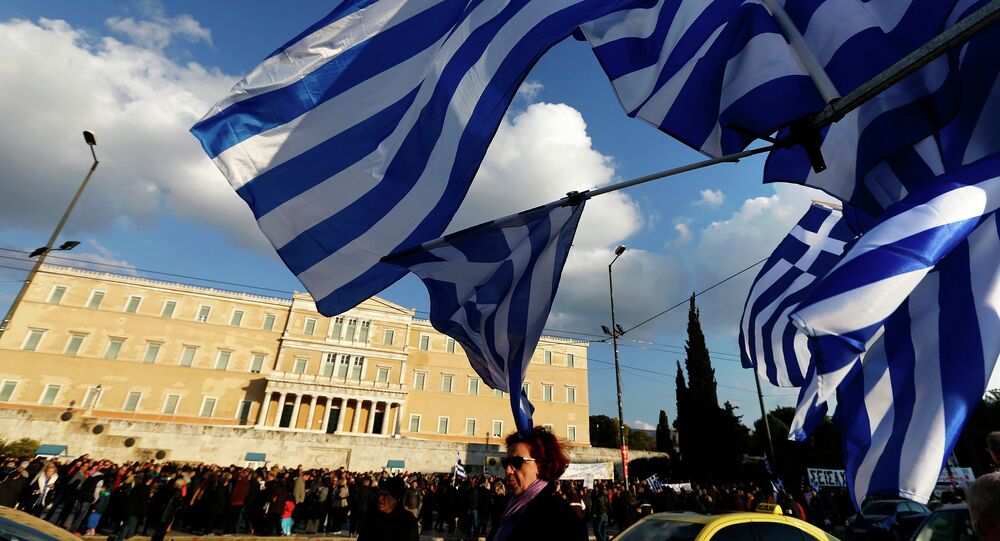 Both Greece and the Eurozone will benefit from Athens' withdrawal, so the parties should not fear the Grexit and focus on positive prospects.

The Greek government agreed to extend the currently-in-effect bailout programfor another four months – something the new cabinet in Athens had previously declined to do. However, the Syriza-led Greek government managed to negotiate a very important concession – the reforms in the nation’s economy will be devised by Athens, not the so-called ‘Troika’ of the IMF-EU-ECB, turning the whole deal into a gimmick of protraction. And while both Germany and Greece are claiming victory or, at the very least, a diplomatic success, in fact, this is a lose-lose situation for the stagnant Eurozone.

© AP Photo / Virginia Mayo
Despite German Objections, Euro Zone Reaches Deal on Greek Bailout
Greece is most likely to carry on with their insufficiently prudent fiscal and monetary policies, nurturing low productivity and economic inefficiency under the banner of left-wing populism without taking any decisive action to resolve the debt issue. Meanwhile, the economic success of Germany in recent years will be effectively offset by the Greek weakness without benefitting the Eurozone’s economy. The decision is simple – the Mediterranean nation should exit the euro area in order to pursue restorative monetary policies and a growth model based on excessive borrowing, governmental spending, constantly devaluating the national currency – the re-introduced drachma – in case the Greeks intend to continue their weird left-wing experiment.

The first reason for the ‘Grexit’ is Greece’s long-lasting economic efficiency and reluctance to do anything about it. Greece’s economy is ruined now, however, its current situation has been brewing for a very long time. Structural deficits and excessive governmental indebtedness first took their toll eight (!) years ago, and only after the three consecutive recessions in a row (in Q3-Q4 2007, Q2-2008 and Q3-2009), coinciding with the global economic downturn, Athens launched the ‘Troika’-funded bailout program in 2010. That year, Greece was on the verge of sovereign default, with a debt-to-GDP ratio of 146% (compared to 127% in 2009) and a junk-level investment rating. The 110 bln euro, allocated by the Troika of EU-IMF-ECB to fund the reforms and cover Greece’s financial needs during 2010-2013, have disappeared to no avail as proper austerity measures were never enforced by Athens. By contrast, just about that time Ireland, another heavily indebted Eurozone nation, completed their Troika-funded reform-and-austerity package and emerged with a robust recovery. That said, the Greeks must be unable or unwilling to play by the common rules, and the Eurozone cannot afford any ‘freeriders’ at this point. Greece must go.

© REUTERS / Christian Hartmann
European Commission President Expects Greece to Stay in Eurozone
The second reason is the fundamental discrepancy between the economic model of Germany – the Eurozone’s leading economy – and Greece. While the former’s growth is based on strengthening surpluses in both trade balance and federal budget, the latter has been overtly relying on governmental spending. In 2014, Germany reported its first balanced federal budget since 1969, setting a new trend for a return to growth as opposed to the financialization, common within the Jamaican system of the early 1980s-early 2010s. Germany has been posting robust foreign trade surpluses recently. In 2007, Germany netted 195 bln euros from foreign trade, with 60% of these revenues coming from other Eurozone nations. In 2007-2013 Germany’s trade surplus with the US skyrocketed by 49%, while deficits with China and Japan collapsed by 71% and 78%, respectively, and Germany’s trade with Brazil and South Korea turned from deficits into surpluses. Meanwhile, since 2012, the little growth Eurozone has had, is based on surplus in international trade, driven by guess who.  Greece’s growth aspirations, driven by budget spending, simply do not fit in the Eurozone’s economic concept.

The third and the last major reason for Greece needs to leave is the nation owes some 320 bln euros – most of which to Germany – is not in fact as bankrupt it claims to be. Athens has the money to repay their debt straight way, they simply do not want to sell their assets, longing for the endless windfall of international bailout money.

© REUTERS / Alkis Konstantinidis
No More Funding for Greece: Germany Rejects Loan Program Extension
According to the data by European Central bank, Greece is able to reach a primary surplus of 4.5% in its GDP by cutting its bloated social payments, despite Athens’ claims it would render the nation ‘politically unstable’. To begin with, Greece has already done so in 1994-1999 in order to join the Eurozone, and no political instability happening then. Furthermore, Greece is spending 17.5% its GDP on pensions as compared to that of 13.8% on the average in Eurozone and 12.3% in Germany.

By the way, in the year 2001 Greece spent slightly below 12% its GDP on pensions, expanding social guarantees at the expense of borrowing from Germany and other foreign nations. At the same time, interest payments by the Greek cabinet fell from 7.3% GDP in 2011 to 4.2% GDP in 2014 and are projected to be at 2.2% in 2020. Just for comparison’s sake, Ireland – the nation that successfully overcame its debt crisis – paid 4.4% GDP towards interest in 2013. Which means, the Greek could reform their economy if they wanted to.

© Flickr / Theophilos Papadopoulos
The Falling Tower of Europe: Greece is the Tipping Point
However, the voters in Greece prefer populist promises to painful, but necessary economic adjustment. The short history of Greece’s participation in its European economic integration has been that of a freerider, raising their living standards beyond the nation’s real productive means. This time around, the windfall of readily available credit must be over. As the next two days will be decisive in Greece’s further relations with the rest of the Eurozone.The best outcome would be Athens leaving the common currency area, exploring new sources of financial support for their debt-fueled governmental economy. Some Eurasian checkbook diplomacy might come in handy for Greece, while the Eurozone should concentrate on developing their newly-found export-based growth model, effectively turning Europe into the world’s source of tech and innovation in had once been.