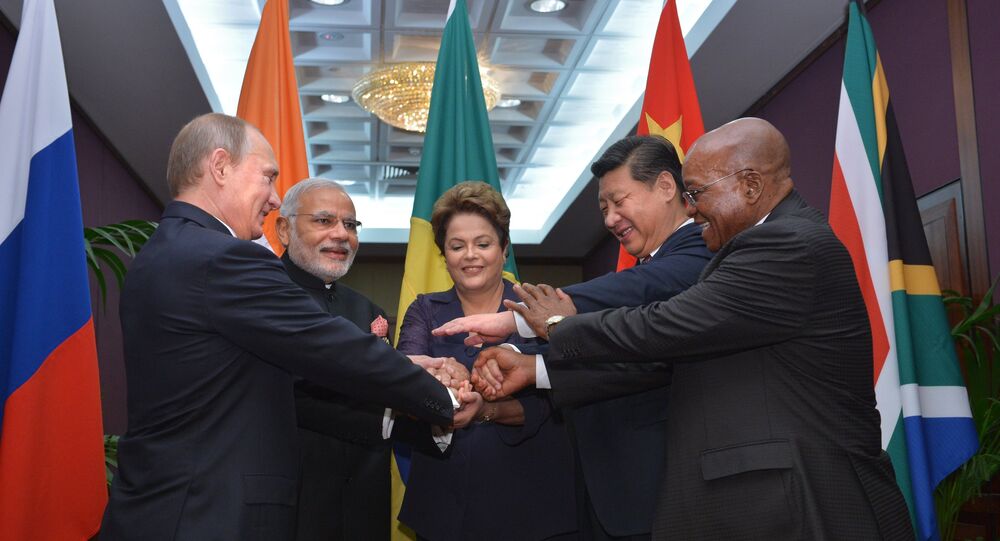 The Nicaragua Canal project undermines the US influence in Latin America and its control over the transoceanic routs, facilitating strengthening the role of BRICS, notably China and Russia in the region.

© Sputnik
BRICS Development Bank to Function by End of 2015 - Russian Official
Ekaterina Blinova — The Nicaragua Canal project has sparked controversy in the West, that fears the new interoceanic route will undermine the US' geopolitical position in South America and reduce its influence in the Western Hemisphere.

Analysts underscored that the new canal would completely change transoceanic trade, strengthening ties between Asia and South America. They point to the fact that among those countries potentially benefitting from the plan are China, Japan, South Korea, Venezuela, Brazil, Argentina and Russia. On the other hand, the new route could undermine the interests of the United States, Panama and Mexico.

The Nicaraguan Canal is meant to become a competitor to the Panama Canal, the waterway connecting the Atlantic and the Pacific Oceans that has long served as the main conduit for international maritime trade. The alternative route, however, is expected to outpace the old Panama Canal: it will be 172 miles (278 kilometers) long and 90 feet (27.6 meters) deep, allowing ships with the capacity up to 400,000 tons to pass through it. It is believed that the new route will diminish the cost of transportation by almost 30 percent for super-heavy cargo ships plying between American, Asia and Europe. In contrast, a typical Panamax vessel has a deadweight tonnage of about 60,000 tons, while after the canal's reconstruction it will be able to handle the ships with the capacity up to 130,000 tons.

© Sputnik / Yuri Nikolayev
Russia,Nicaragua Agree Simplified Port Entry Protocols for Russian Warships
Experts note that the Nicaraguan Canal idea is not new, but it was the Chinese HKND Group (HK Nicaragua Canal Development Investment Co Ltd) who pledged to realize the ambitious project, costing $50 billion and providing jobs to 50,000 people. It is expected that the construction will be completed by 2020.

Since 1904 the United States has been controlling all the interoceanic transits between the Pacific and the Atlantic after imposing its protectorate over Panama. Remarkably, between 1912 and 1933 Nicaragua had been occupied by American troops, preventing other nations from building the alternative canal that could compete with the US-owned Panama transoceanic route. Although Panama became the full owner of the Canal in December 1999 and the US military installations were turned over to local authorities, de-facto the zone still remains under Washington's close observation.

Predictably, the United States is openly expressing its dissatisfaction with the Nicaraguan Canal project labeling it as dubious and unrealistic. The US-based think tanks blast the plan, citing concerns regarding "transparency" and "democracy" in Nicaragua, as well as "free-market principles" violation, negative social and environmental impact.

"The [US] embassy is worried by the lack of information and transparency that has existed, and continues to exist, over many of the important aspects of this project," the US Embassy in Managua said in an official statement in January 2015.

© Sputnik
Russian Defense Minister Awarded by Nicaragua Amid Cooperation Boost
"We urge that in all phases of this project, including the financing, the feasibility and environmental studies, the bidding process for participating construction companies from the United States and other nationalities, and the methodology to resolve the issue of property, and other aspects – are done in a way that is open and transparent," the statement added.

Recent rapprochement between Russia and Nicaragua in the field of defense prompted some experts to speculate about Managua's security concerns related to the canal's construction. It should be noted that during the latest visit of Russian Defense Minister Sergei Shoigu to Nicaragua a number of important intergovernmental agreements were signed expanding bilateral military and technical-military cooperation, particularly allowing visits of Russia's warships to ports in the Latin American country.

The creation of the new Nicaraguan Canal may shift the geopolitical balance in the region, strengthening the role of BRICS, notably China and Russia in the strategically crucial region. At the same time it will pose a substantial threat to the US interests, both political and economic, undermining its longstanding domination in the Western Hemisphere, analysts say.