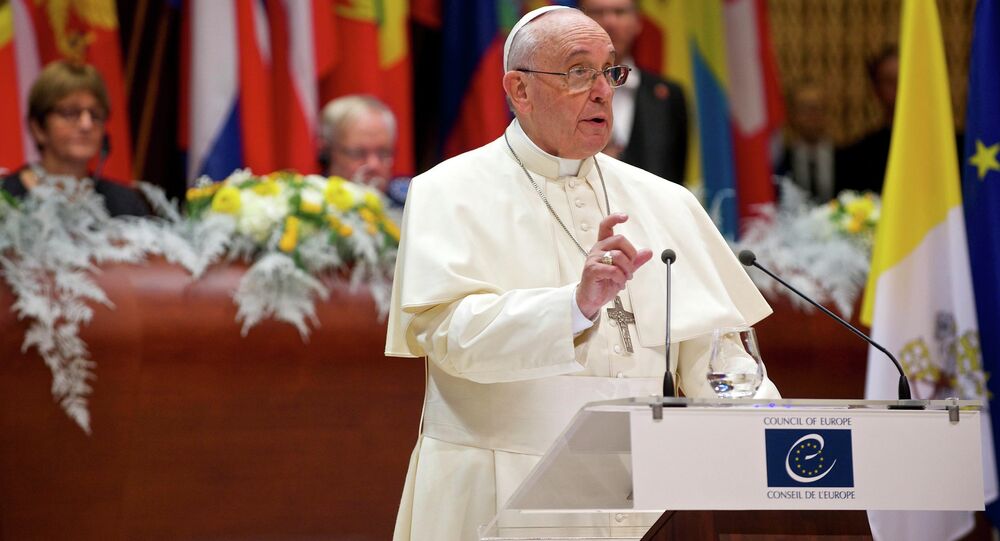 A Polish Catholic publicist has excoriated the Pope for his efforts to establish a friendly dialogue with his Russian Orthodox counterpart and for his failure to condemn Russia for its alleged involvement in the conflict in eastern Ukraine.

Terlikowski, who has attacked Pope Francis on previous occasions for his positions on a wide range of subjects, from homosexuality to parenting, now lambasts the pontiff's categorization of the Ukrainian civil war as a "fratricidal conflict".

“I think of you, Ukrainian brothers and sisters, but (also) think that this is a war between Christians! All of you have the same baptism! You are fighting among Christians. Think about this. This is a scandal,” Pope Francis said during his general audience at the Vatican February 4.

The Polish writer wonders why the pope bemoans the civil war in Ukraine instead of condemning the supposed aggressor, saying that "it is unclear why the call for peace…is addressed exclusively to Ukrainians, as if they are to blame for the fact that the Russians attacked them."

Pope Francis: The Warrior of God Wages New Battle
Terlikowski says that "it is senseless to search through [the pope's] speeches for words that even hint at the participation of Putin in this war," and notes that "the silence was especially noticeable after Russian terrorists shot down the Malaysia Airlines plane. At that time the Pope, praying for the victims, did not mention the two (speaking frankly – different, by nationality) sides of the conflict, speaking instead only of the two opposing Ukrainian groups."

While Terlikowski accuses the pontiff for his failure to follow the accepted wisdom of much of the Western political and media environment that the war in Ukraine was caused by Russian aggression, the fact is that Pope Francis simply refuses to repeat the propagandist mantras of Western, unanimously pro-Kiev media. Francis stands, albeit indirectly, on the side of those who have pointed out all along that evidence of Russian military aggression has yet to be substantiated, who have pointed out the discrepancies in the theories of those who claim that Russia or Russian-backed rebels shot down MH17. At the same time, while Terlikowski throws around commentary about Russia, he fails to acknowledge the real and indisputable instances of lawlessness in the Odessa House of Trade Unions, or the shelling by the Ukrainian army of its own cities.

"When I hear the word 'victory' or 'defeat,' I feel such great pain, great sadness in my heart. These are not the right words, the only word that is right is peace," Pope Francis said February 4, commenting on the escalation of violence in the country.

Taking the argument to the civilizational level, Terlikowski says that part of the problem may be that many Catholics, among other Western conservatives, have succumbed to the ideas "of a 'Great Russian Civilization' and her icons, mysticism and teleology." He notes that while these people may have been intrigued by Russia's symbolic resistance to "the camouflaged totalitarianism" of liberalism, the reality is that Catholics' search for ecumenical closeness with the Russian Orthodox Church is in vain, "bait" used by the Kremlin "to get new concessions from the Vatican."

© Photo : cfnjjv/ Ludicrous Vatican Production
Vatican Releases Bizarre Video to Promote All-Male Conference on Women
The publicist's cynicism is hardly surprising, given his praises for the approach of Poland's own John Paul II, who, in Terlikowski's words, moted "that the most effective approach to dialogue toward the Soviet Union and to post-Soviet Russia" was "that one cannot sign agreements with the Soviet Union as with the devil." As for Pope Francis, he, in Terlikowski's view, "lacks an understanding of Russia and its essence… and that is why [he] is doomed to diplomatic defeat in the war waged by the Kremlin."

Commenting on the Latin American origins of the pontiff, Terlikowski argues that perhaps the failure by Francis and his Vatican aides to see through the supposed manipulations of the Kremlin has something to do with the fact that "most of them come from countries which have long succumbed to the manipulations of Russian diplomacy." In his view, a stiff upper lip, not compromise and negotiation, is what is needed. Thankfully, so far, the progressive Pope has refused to take such a destructive line.

Pope Francis to Address US Congress in September

Haircuts for the Poor, Courtesy of Pope Francis