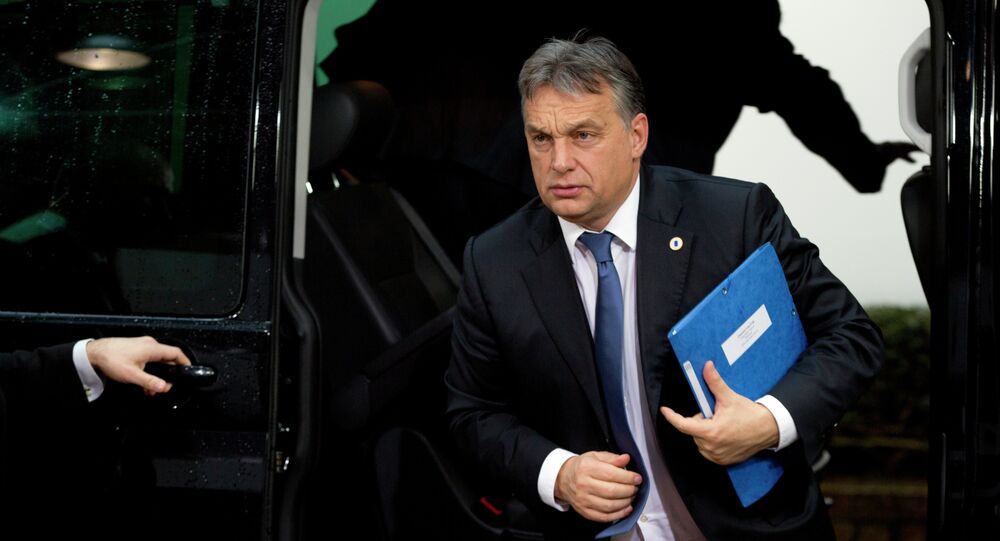 What's Wrong With Them? East European Leaders the West Prefers to Demonize

Western media commentators have raised a bit of a stink over Vladimir Putin's upcoming visit to Hungary. Sputnik asks why it is that independence-minded leaders like Hungary's Prime Minister Viktor Orban are seen as such a big a thorn in the side of the EU and the US.

Victor Orban: Walking on a Tightrope Between EU and Russia
Ahead of Russian President Vladimir Putin's visit to Hungary Tuesday to meet with Prime Minister Viktor Orban, Western media commentators were sure to remind their listeners and readers about just how much of a bad guy the Prime Minister was, and just how far he stood outside the European consensus on a great number of issues, including relations with Russia.

The BBC's commentary on the upcoming meeting featured a motorcycle ride around Budapest which revealed some of the relics of the Hungarian-Soviet relationship, along with a reproachful reminder that "nowadays one of [Hungary's] biggest exports is controversial headlines about its right-wing prime minister, Viktor Orban." Commentaries on the visit from the BBC and other sources touched upon all the dirt they could recall about the PM, from his statements about a desire to create an "illiberal" democracy to accusations of authoritarianism to insinuations that he had "undermined" the country's democratic institutions by reforming the country's electoral system (which, incidentally, made it more like Germany's). Recalling critical commentary from across the pond, journalists also cited US President Barack Obama's comparison of Hungary to instability-prone Egypt in terms of its civil rights, while others recalled Senator John McCain's statement that Orban was a "neo-fascist dictator." All this falls in line with theories on Central European "democratic regression", or what is vaguely referred to as something called "Putinization";  this became a popular buzzword among NGOs and think-tanks including Freedom House and its European and US-funded Budapest-based counterparts shortly after Orban's election.

However, despite the mountains of criticism leveled against Orban in recent years, the latter's room to maneuver, in both domestic and in foreign policy, is actually highly constricted by the institutions of the European Union. This is evidenced even by the Foreign Ministry's nervous explanations about what it is exactly that Putin's visit to Budapest will constitute. In effect, it seems to take very little movement in the 'wrong' direction to attract the ire of Brussels and Washington.

A Summit? Not a Summit? Walking on Euro-Eggshells

Following a March 2014 EU decision that "member states will not hold bilateral regular summits [with Russia] for the time being," Hungarian officials were forced to explain that the upcoming Orban-Putin talks are not a "regular" state visit, but a "special," "working visit" event. An unnamed EU diplomat told The Economist that all the hubbub about what to call the event is based on the fact that "EU member states agree on a policy and we all follow it, especially in a high-stakes environment like this one."

Moreover, the Hungarian diplomatic corps has been very careful to point out that the upcoming meeting is part of a series of regional meetings between Orban and officials from several countries, including Germany, Poland, and Turkey. The Hungarian Foreign Minister, Peter Szijjarto, meekly told AP that given the country's dependence on Russian gas, Hungary "cannot afford not to talk to Russia," faintly adding that "we wish there were other solutions, but there are not."

The fact that Hungary must humbly explain its motives for meeting with the Russian president to the EU and Washington is understandable, given the constricting political environment the country finds itself in. At the same time, it is somewhat odd that, in the 21st century, the country is not free to conduct its own foreign policy toward Russia, given the country's heavy dependence on Russian energy supplies, the estimated $750 million worth of losses Hungarian producers have faced due to sanctions, and the country's present need for Russian assistance on an $11 billion project to upgrade the country's Paks nuclear power plant. It seems unlikely that Hungarians waking up to find themselves free of the Soviet colossus in 1989 could imagine that their bright future would consist of being constricted by another colossus, the EU.

Orban Not the First to Make the EU/US Hit List

© REUTERS / Vasily Fedosenko
Lukashenko? No Wait, Poroshenko? 'The Economist' Mixes Up Two Leaders
Whatever issues and fears drive European and American commentators regarding Orban's mildly rebellious attitudes and behavior, the prime minister is not the only, and far from the first Eastern European leader to be blacklisted by EU and US policymakers and analysts since the collapse of the Soviet Bloc.

Long-serving Belarusian president Alexandr Lukashenko has been called "Europe's last dictator" so much and for so long that he has turned it around on his critics, to the point where he now uses it regularly in sarcastic press remarks to prove a point about his firm stance on an issue. Before him there was Slovak Prime Minister Vladimir Meciar, whose country US Secretary of State Madeleine Albright called "a black hole in the heart of Europe," and whose party couldn't form a coalition in 1998, despite winning the popular vote twice, as NATO and EU officials made it clear they would not allow Slovakia to access the organizations should he become Prime Minister for a second term.

Other independent-minded officials, including Czech presidents Vaclav Klaus and successor Milos Zeman, have also been the subject of media criticism and political ostracism, the latter for his estimation that the Ukrainian conflict was "a civil war" rather than a "Russian invasion," and for his anti-Khodorkovsky, anti-Pussy Riot outbursts. Zeman's contrarian statements have resulted in Bohuslav Sobotka, the country's prime minister, attacking the President, warning that his "dangerous" statements risked alienating the Czech Republic from the EU and NATO. In the Czech Republic and abroad, the unremitting presidents have been derided by witty journalists and diplomats alike; an unnamed Czech diplomat recently told the Financial Times that "it has become something of a Czech tradition to have a crazy man in the [Prague presidential] castle."

And it's not just a matter of having a somewhat positive opinion of Russia. Anyone who goes against what Brussels considers to be in vogue at the moment is slammed by journalists and commentators —case in point: the Kaczynski brothers in Poland.

© AP Photo / Virginia Mayo
Orban: US Meddling in Central Europe, Hungary Must Stay Out of New Cold War
Addressing the history of hostility toward independence-minded Eastern European leaders, Higher School of Economics Alexander Domrin told Sputnik that in recent years, "in Eastern Europe, but not only in Eastern Europe," leaders like Orbán are indicative of "this growing feeling…that the countries of Europe have surrendered too much sovereignty to the EU." As for the US, Sputnik contributor Andrew Korybko notes that US policy in relation to such leaders is based on the intimidation tactics, including via the threat of a color revolution, if necessary, to prevent them from getting too far out of line.

Victor Orban: Walking on a Tightrope Between EU and Russia

Lukashenko? No Wait, Poroshenko? 'The Economist' Mixes Up Two Leaders