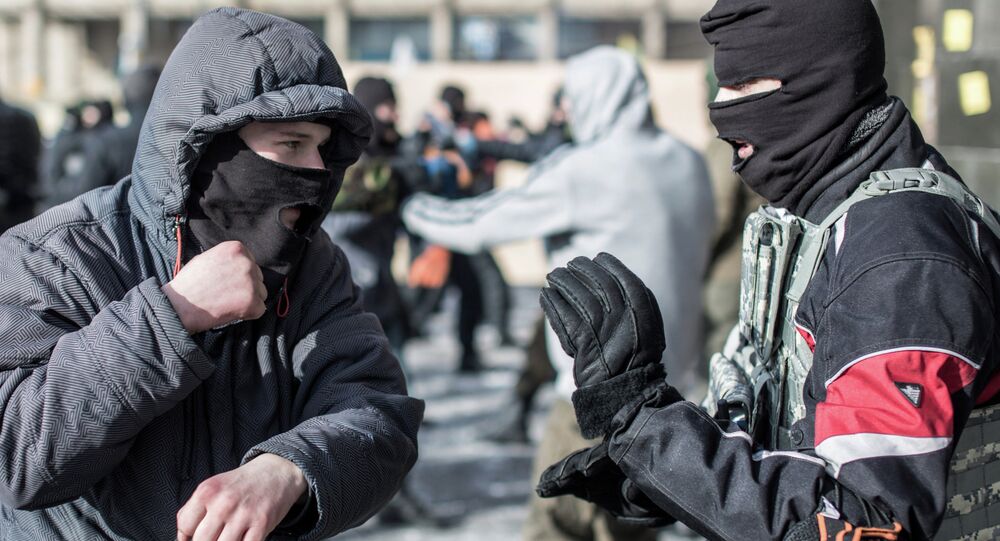 The Right Sector is not actually under the control of Kiev that is undermining the peace process in Ukraine, experts said.

© Sputnik / Pavel Palamarchuk
Right Sector to Continue Military Operation Regardless of Minsk Deal
WASHINGTON (Sputnik) — The Right Sector, a Ukrainian nationalist paramilitary faction, refuses to abide by the Minsk agreements, has sufficient funding and weaponry to prolong the conflict and there is nothing Kiev authorities can do to stop them, experts have told Sputnik.

"The Right Sector is not actually under the control of Kiev and, sure, they are undermining the process. This is a Nazi paramilitary force that is more or less connected to powerful oligarchs and their financial networks," geopolitical analyst and founder of StopImperialism.com, Eric Draitser, told Sputnik on Friday.

The Ukrainian leadership, according to Draitser, was being disingenuous in negotiating on behalf of forces they cannot contain.

"It's ridiculous to think that these Nazis, many of whom are ideologically driven, many of whom are driven by the salaries that are being paid by [Ihor] Kolomoisky and others, will simply lay down their arms and go home," Draitser stressed.

Although the nationalist group is working to disrupt the peace process, Draitser said the bigger issue was that the process itself was flawed.

© AP Photo / Emilio Morenatti
Right Sector Militants Seize Church in Ukraine’s Cherkasy Region
"The process is more of an illusion, because if you look at the specific points of the agreement that was reached in Minsk, it's really not substantively different than what the Russians offered back in April or what was offered in September," the analyst explained.

Draitser said the current situation resembled more of a "freeze" in an ongoing conflict. He hopes the de-escalation leads to a more comprehensive agreement, yet he indicated that it was hard to imagine that anyone in Donbas (southeastern Ukraine) believed they were going to reach a political settlement with the ultra-nationalists.

Former Political Counselor at the Canadian Embassy in Moscow, Patrick Armstrong, also said that the Right Sector would try to disrupt the Ukrainian reconciliation process and had the resources on hand to achieve this objective.

"Yes. They have the guns," Armstrong plainly stated after Sputnik asked him on Friday whether the Right Sector would derail the peace process.

Do you think the Minsk summit agreements will hold?
Voted: 2
All polls
The former Canadian official added that the Ukraine government was too "contaminated" to prevent the Right Sector onslaught, which he predicts will only escalate in the coming months, while Kiev remains paralyzed by corruption.

On Friday, the leadership of the radical Right Sector announced it would not abide by the Minsk ceasefire agreement that was signed in the Belarusian capital on Thursday, following 16-hour talks between the leaders of the Normandy Quartet, which includes Germany, France, Russia and Ukraine.

The ceasefire is expected to come into force at midnight (Kiev time) on February 15.

This is the second ceasefire agreement reached between Donbas independence supporters and Kiev forces since the start of the latter's military operation in southeastern Ukraine last spring. The first ceasefire agreement was signed at a meeting of the Contact Group on Ukraine in September, 2014. However, despite the deal, clashes between Kiev forces and independence supporters continued through the end of 2014, intensifying at the start of 2015.