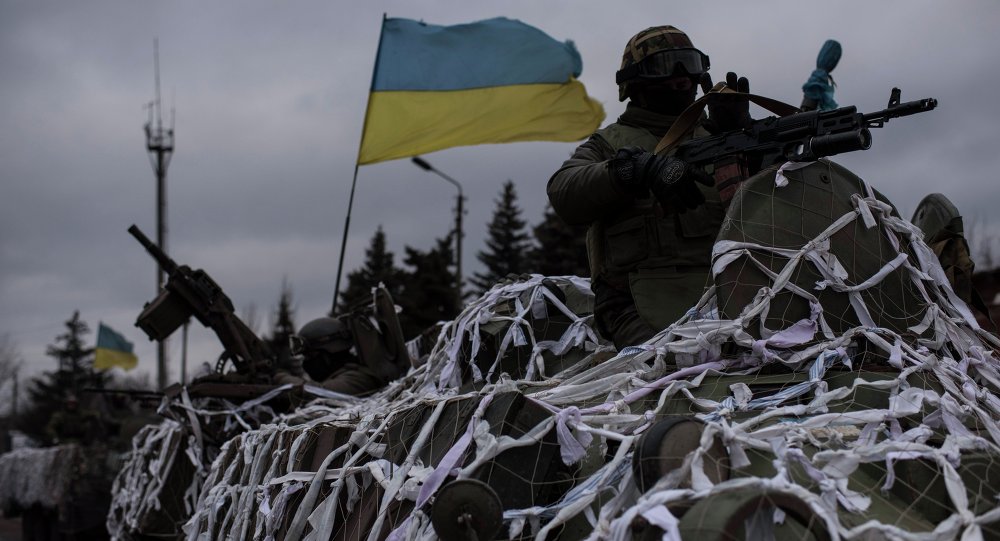 A Sunday night political talk show on Germany's ARD became heated as German experts challenged a former US ambassador's remarks about his country's role in the conflict in Ukraine.

© Flickr / Giampaolo Squarcina
European Governments Step Out Against US Arms to Ukraine, Warn of Possible Escalation
A German political talk show discussing the issue of resolving the crisis in Ukraine became heated Sunday evening as German experts ganged to challenge a former US ambassador's remarks about his country's role in the conflict.

Former US ambassador to Germany John Kornblum riled up his hosts by playing down the importance of the Franco-German peace negotiations on Ukraine, stating that "Russians respect only strength, not conciliation." The ambassador noted that while "it's wonderful that Europe is doing something…nothing will be achieved without the participation of the United States." In his words, "the bottom line is that the power lies in Washington."

European Parliament President Martin Schulz quickly jumped to challenge Kornblum's view, noting that "on the contrary, everything will work out if Europeans come to an agreement with their European neighbors. The USA is not a neighbor of Russia, and this war is not occurring at the gates of the US. I want to emphasize that this is a European problem, and I believe that the United States must stay some distance away from it." Schulz added that President Barack Obama's statements about Russia losing its status as a great power are "simply wrong," and that with Russia a nuclear superpower with a permanent place at the UN Security Council, "I ask myself –what is the point of such a provocation?"

© AP Photo / Michael Sohn
Merkel Holds Firm Over Resolving Crisis Without Arming Ukraine
Schulz voiced his confidence that "diplomacy now has a very big chance," noting that Europe has taken it upon itself to look for a solution to the crisis. "The initiative of Angela Merkel and Francois Hollande, who act on behalf of Europe, creates a platform for dialogue between the EU and Russia." He emphasized that "this is not a Russia –US dialogue, but a Russia-Europe dialogue."

Journalist and former ARD Moscow correspondent Gabriel Krone-Schmalz agreed with her colleague, noting that now "the showing of strength or of weakness is not the important criteria." Rather, what's most important "is how to stop what is happening in Ukraine, as soon as possible, because people there are dying every day."

Krone-Schmalz went on to note the absurdity of "arguments [presenting] Putin as distanced from reality, crazy, bloodthirsty, autistic even, instead of learning about the situation in Russia, learning the interests of the Russians."

Ex-ambassador Kornblum was forced to tiptoe over the issue of the provision of arms by the US, noting that "I am not saying that the provision of arms is necessary; I am saying that the Europeans must more seriously consider this problem." He added that "only some Americans" support the provision of arms to Ukraine, while adding that US politicians such as US Senator John McCain, who call for the speedy provision of arms, do not necessarily think carefully about the repercussions of their words. "McCain is known for his pointed wording. But he does not always think carefully about what he says, does not always have [all] the facts," Kornblum noted. He brushed off McCain's aggressive posturing by noting that "in politics, in times of major crises like today, this type of thing happens."

© Flickr / United Nations Photo
Deployment of UN peacekeepers in East Ukraine Possible – Russian UN Envoy
Retired German Air Force General and former NATO Military Committee Chairman Harald Kujat joined in on the conversation, pointing out dramatically that what's at stake with these negotiations is the threat of a general war in Europe. He noted that "there is the danger that the war in Ukraine will turn into the war for Ukraine. This would be a development which no one would support." Furthermore, the General noted that "if we stupidly enter into this war, we won't be able to win it; we will lose, and this will be catastrophic." Kujat noted that with the Merkel/Hollande peace mission, "no effort can be wasted in order to do something in the name of peace and for the people of the Ukraine."

When Kornblum claimed that "Russians are fighting this war," Kujat retorted, noting that "we are always told from various sides that regular Russian forces are participating in the conflict. Ukraine's president has consistently repeated this. However, I have no evidence that would prove this with absolute plausibility."

The general added that in his view, "if the regular forces of the Russian army were participating in the conflict, it would have been finished in 48 hours."

Asked about how much time would be necessary to regulate the crisis, Schulz noted that "as much time as necessary in order to prevent fighting. Let's speak about this openly. I will conduct negotiations until the threat of war subsides, because the alternative is war with Russia. Is anyone really in the position to fight such a war?"

European Officials Step Out Against US Arms to Ukraine, Warn of Escalation