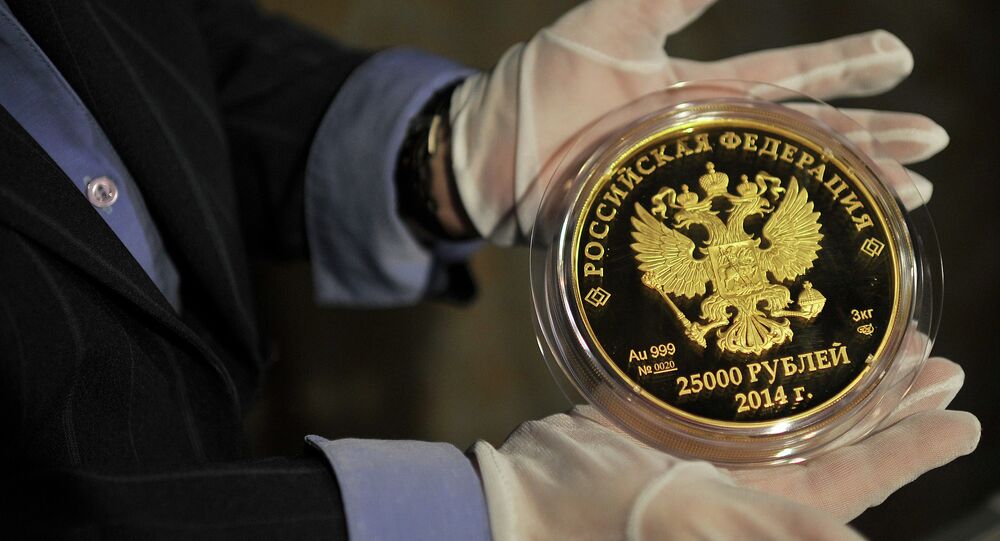 An article by Mises Institute contributor Marcia Christoff-Kurapovna believes that now is the ideal time for Russia to introduce a gold-backed ruble.

Mises Institute contributor Marcia Christoff-Kurapovna believes that Russia may be in the process of planning for the introduction of a gold-based currency, and would be better off for it.

"Though a far-fetched idea at first glance, many factors suggest that remonetization in gold may be a logical next step for Moscow," Christoff-Kurapovna notes in an analytical article published Friday on the libertarian think tank's website.

The columnist notes that several factors may play into the decision, including Russia's recent partial detachment from Western economic and financial structures, sanctions, the ruble's devaluation and economic decline.

© Sputnik / Oleg Lastochkin
Belgium Reportedly Plans to Retrieve 200 Tons of Gold From UK Storages
She further explains that even before the sharpening of relations between Russia and the West, economists close to Vladimir Putin have for years "been expressing [Russia's] unwillingness to remain at the monetary mercy of the US and its NATO allies," among them Sergei Glazyev, economic advisor to the president, and political ally to Deputy Premier Dmitri Rogozin.

Christoff-Kurapovna also points out that despite the ruble's dramatic decline at the end of 2014, Russian economists rejected the idea of selling off gold reserves to prop up the currency, and on the contrary continued a heavily publicized purchase of gold. Christoff-Kurapovna attributes this to a keen awareness of the past lack of success among European countries including Britain, France, Italy and Spain in propping up their economies via the selling off of reserves.

The expert argues that "while the Russian economy is structurally weak, enough of the country's monetary fundamentals are sound, such that the timing of a move to gold, geopolitically and domestically, may be ideal." The expert echoes commentary made by Russian economists and financiers, including recently by Central Bank Head Elvira Nabiullina,  namely, that Russia's debt to GDP ratio is low (equivalent to $478 billion in a $2 trillion economy), with most of its external debt in private hands, which has also declined by $100 billion, and with a budget deficit projected at less than 1 percent of GDP.

Christoff-Kurapovna believes that as long as Russia continues to be a resource-based economy, its dependence on energy sector exports will play a negative role on currency stability. As a result, she argues, "only a move to gold, arguably, can make the currency stronger, even if it does limit Russia's available currency. In buying as much gold as it has, the country is, in part, ensuring that it will have enough money in circulation in the event of such fundamental transformation."

Pointing out the potential benefits of the switch, the columnist argues that a gold-backed currency would turn the ruble into a more respectable world currency, while also making Russia "a more reliable and trustworthy trading partner."

© Sputnik / Pavel Lisitsyn
Gold, Silver Dip on Upbeat News From Greece and China
More ominously, for the established order, a gold-standard-based ruble would "above all…mean the first major schism in the world's monetary order." If China follows Russia's lead, which Christoff-Kurapovna believes is likely, "it could mean the threat of a severe inflation in the United States should rafts of unwanted dollars make their way back across the Atlantic — the [Federal Reserve's] ultimate nightmare."

In her article, the columnist cites bullion exchange expert Alisdair MacLeod, who notes that Russia and China would "hold all the aces" if they moved "the currency war away from the foreign exchanges and into the physical gold market," especially in light of the current low demand for physical gold in Western capital markets. The expert points out that last month, the Shanghai Gold Exchange and the World Gold Council concluded a deal aimed at expanding the Chinese gold market via the Shanghai Free Trade Zone.

As far back as December, Macleod told CNBC that "there is no doubt that Russia and China, plus the other Eurasian states in their sphere of influence [such as Kazakhstan], are all accumulating gold and the indications are they see it as central to replacing the US dollar for cross border trade." Macleod noted that "it is already in Russia's interest to cast itself off from inflating western currencies and to base their economy on sound money, aka gold."

A Warning to the Wise…

Christoff-Kurapovna points out that the transition to the gold standard would not be easy for Russia: "As a pro-gold stance is, essentially, anti-dollar, speculation about how the US would react raises the question of whether an all-out currency war would follow. The West would have to keep Russia regionally and militarily marginalized, not to mention kept within the confines of the Fed, the ECB, and the Bank of England (BOE)."

Broaching the subject of Russia's possible switch to the gold standard, KavPolit.com columnist Evgeni Lihachev noted recently that even Russia's moves to shift its reserves to non-dollar-based assets and to trade energy resources in ruble-denominated valuations have been viewed with hostility by Washington. An attempt to transition to a gold reserve would be much more serious, Lihachev says, explaining that "the fates of [Iraq's Saddam] Hussein and [Libya's Muammar] Gaddafi in these matters serving as a litmus test." Many Russian geopolitics and economics experts are convinced that the 2011 Western military campaign against Gaddafi was related directly to the latter's plans to stop selling oil in US dollars and to introduce a gold-backed regional currency which would have devastated Western fiat currencies. The earlier invasion of Iraq is similarly believed to be linked to the country's move toward independence from the dollar.  Lihachev points out that the United States cannot "act like in Iraq and Libya in relation to Russia…and those measures which it could take it have already been taken."

In light of China's continued agreement to ruble denominated gas contracts, Lihachev notes that "one gets the feeling that China knows more than they let on." The expert further notes that "this is indirectly confirmed by the almost synchronous launch by Russia, China and Kazakhstan in actively buying physical gold for national reserves." Ultimately, Lihachev notes that "of course, we still have a long way to go to reach the 'official gold reserves' held by the US, but in the event of a transition to the gold standard, what is important is not so much the amount of gold as the ratio of the reserves to the money supply."

Russia's gold reserves are now estimated to be the world's sixth largest, comprising over 1,200 tons as of February 2015. The country purchased a record 152 tons of the precious metal over the course of 2014, including 20.7 tons in December alone, Russia's purchases amounting to nearly a third of total world central bank purchases, according to the World Gold Council. Russian experts have also suggested that unofficial purchases made by the Russian and Chinese governments may have been even higher. The two countries also have a favorable position in global gold production, Russia mining 272 tons of gold in 2014, while China produced a whopping 465 tons, making the two countries the top two producers globally.

In a bid to counter gold-rush sentiment among both the Russian government and Russian citizens, Former advisor to the Chairman of the Central Bank, financial Obudsman Pavel Medvedev recently told Russia's Svobodnaya Pressa that a gold-based currency is "absolutely impossible" for Russia or for any other country in the world, due to the precious metal's limited supply. He noted that the modern economy needs far more financial liquidity than a gold standard backed currency can provide. "In a word," he stated, "entering the gold standard is not possible –there is not enough gold to achieve it." It remains to be seen what the Russian leadership really thinks about the idea.