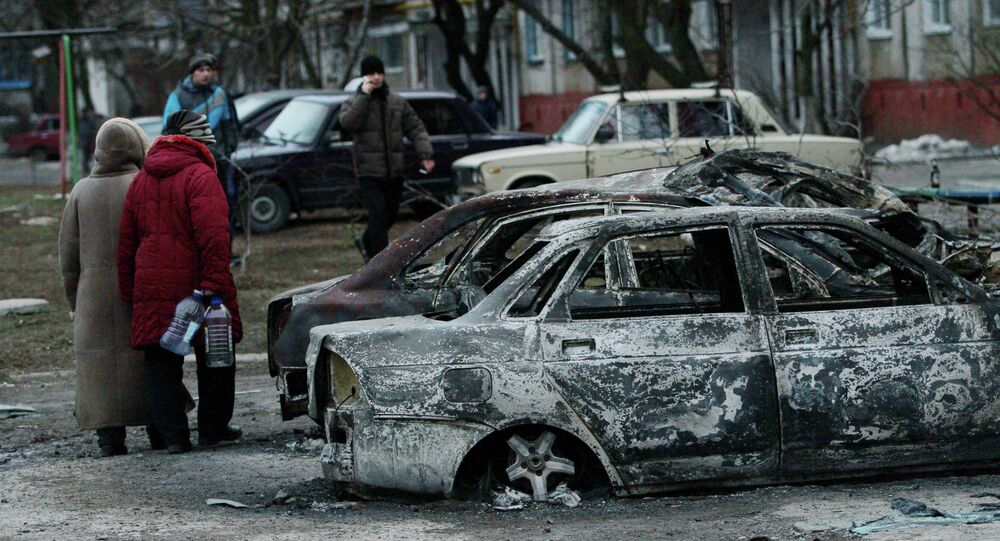 For the United States, There's No Business Like War Business

The longer and bigger the war in Ukraine becomes, the more lucrative it becomes for US politicians and big business, says Alexandr Khrolenko, a columnist for the RIA Novosti information agency.

© AP Photo / Pablo Martinez Monsivais
US Sticks to Tried and True Policy of Supporting Coups
MOSCOW, February 2 (Sputnik) — The pro-independence militia in the Donbas are in the process of liberating new territories. The encirclement of a large group of Ukrainian forces numbering in the thousands is taking place around the city of Debaltseve; a narrow gap in the front there is soon set to be eliminated. And nevertheless the war will continue, and for a long time, because even in the limited Donbas format, it will result in profits for American corporations.

The West Will Help Arms Companies

Over the course of two weeks, according to data released by the hacker organization 'CyberBerkut,' the Ukrainian armed forces suffered over 1,000 fatalities and more than 100 of their tanks were destroyed, with dozens of soldiers and officers surrendering to the militia. These days, the US needs Ukrainian casualties.

Kiev is being forced into a war. On January 24, US Vice President Joe Biden discussed the situation in Donbas with Ukrainian President Petro Poroshenko. The pair condemned the violence and expressed their conviction that "the costs for Russia will continue to rise" for its alleged aggressive actions against Ukraine.

The possible [new] victims and the idea of Ukraine being responsible for the conflict are not even being considered; Poroshenko was given a carte blanche and an indulgence. Shortly thereafter, the Verkhovna Rada officially declared that Russia is an aggressor nation, as if this was another step toward the direction of a peaceful resolution of the conflict.

© RT
Ukrainian Nationalists March in Torch-Lit Rally Through Central Kiev
Ukraine and the European Union serve as subordinate instruments of US foreign policy. The Europeans are being pushed headfirst toward war. On January 28 in Washington, US Assistant Secretary for European and Eurasian Affairs Victoria Nuland urged NATO to deploy command posts and to create rapid-reaction forces to its eastern members. "We must install command and control centers in all six frontline states as soon as possible," Nuland noted. She explained that "NATO is a defensive alliance," and that "our goal is deterrence of aggression," but "if that fails we have to be ready." In other words, she's asking NATO to be ready to stage preemptive attacks. Europeans are being convinced of the need for war with Russia, setting them up for the next advance on Moscow and beyond.

Last Week, US Deputy Secretary of Defense Robert Wark said that the NATO alliance has come face to face with several potential enemies at once (Russia, China, North Korea and Iran) and called for an increase in defense spending to two percent of GDP by NATO countries. First and foremost, this is a form of direct lobbying of the interests of the American corporations which manufacture weapons to NATO standards. Moreover, it was announced that the already considerable defense spending of the United States would be increased once more in 2016.

Against the background of substantial guaranteed profits, American officials constantly forget to read up on their history, underestimating their potential enemy. How many thousands or millions of European citizens must once again lay down their lives on the battlefield out of the political short-sightedness and greed of a few politicians? From the Ukrainian events of 2013-2015, only a small number of Americans have come to reach the right conclusions.

New York University Professor of Global Affairs Mark Galeotti noted in Business New York recently that that Kiev presently lacks a fighting spirit and a meaningful strategy, as if they ever had either. Jumping up and down on Maidan Square for American cookies is easier than defending American interests under the bullets of the militia in Donbas.

© Sputnik / Vladimir Fedorenko
PACE Ejects Russia, Loses Leverage Over Ukraine Conflict
Andrew Weiss, Vice President for Studies at the Carnegie Endowment, and former National Security Council director during the Clinton Administration, noted in Politico recently that "the West’s position of strength is not as strong as it appears. The reformist government in Ukraine is simply too fragile to survive a protracted, full-scale confrontation with Moscow.  For all its current difficulties, Putin’s Russia is not going to be brought to its knees by the existing array of sanctions and diplomatic pressure. Yet Western officials are still implicitly assuming, at best, that Putin one day will cry uncle or, at worst, that the Ukraine crisis can be left to simmer on the back burner."

And when all is said and done, time is not on Poroshenko's side. In the military confrontation Kiev will never be able to achieve victory. Russia, with all its international influence, will not allow for a genocide against Russians in Donbas, and Ukrainian conscripts will not stop running away from mobilization in droves, even if Poroshenko, Yatsenyuk and Turchynov personally stand in the blocking detachments.

We have seen how large scale military defeats have forced Ukraine to the peace talks table [in Minsk], following which Kiev saves up its strength, and once again throws its troops into the Donbas region. This can continue on for a long time.

However, the lack of fighting spirit and the degradation of the Ukrainian economy will sooner or later have the potential to turn thousands of Ukrainian radicals, now with combat experience, toward a new Maidan. At that point, Poroshenko can be saved only by the direct (military) intervention of the European Union and the United States. In the heart of Europe, on the borderline separating two worlds, each of them nuclear-armed, the flames of war continue to grow.

Onward Towards A Hundred Years of War

Having overcome the inertia in their perception of reality, now even serious foreign analysts are calling the conflict in Ukraine a war, and are attempting to predict its duration. Foreign aid to Kiev is growing. For example, Poland is ready to provide boots on the ground within an international mandate, along with any kind of weapons –all for a fee of course. The USA too is also no longer hiding its involvement.

Who do you think the US military is most likely to engage with next?
Voted: 2
All polls
The first evidence of the presence of foreign professionals in the conflict zone was revealed in the summer of 2014, while the protagonist in the recent TV story from Mariupol, combat-equipped native English-speaking Chris Garrett, explained that he was a 'volunteer' servicing in a volunteer battalion and carrying out a highly voluntary mission.

Gradually being drawn into the Ukrainian conflict via rations, sleeping bags and combat capability, the West will not help Kiev wipe Donbas from the political map. The conflict of geopolitical interests and the team of Western stooges in Kiev doom Ukraine to a long and hopeless armed confrontation. Drawing on the resources of the EU and NATO, the war may continue on indefinitely.

In a way, the present draw in the fighting suits the West. In this way, the US and NATO do not lose face, receive reasons for increasing their military budgets, and justify their presence in Europe. Ukraine maintains pseudo-statehood status. And the Donetsk and Lugansk republics demonstrate their independence, becoming de-facto geopolitical subjects. Donbas can grind the superior forces of the enemy for years. For the US, the death of the local indigenes in conflicts is a familiar and even traditional affair.

Perhaps the war in Ukraine can carry on for ten years, after which the Americans will call it a mistake, like they did with Iraq. In any case, the conceptual re-division of the spheres of influence in the world will not stop. If the conflict in Ukraine is extinguished, it is easy to predict the development of a new epicenter of conflict in the post-Soviet space, since it is profitable for the United States.