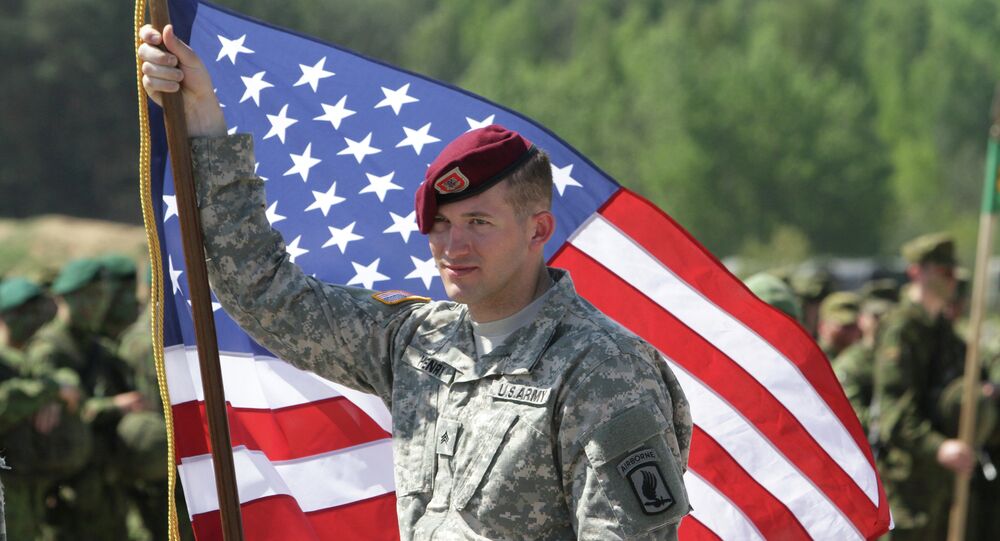 Experts Say US Overspends on Defense, Defunds Its Social Progress

The White House will seek a defense spending increase when it submits its 2016 budget request to Congress next week.

WASHINGTON, January 30 (Sputnik) — The United States continues to overspend on defense and underfunds its social development, experts told Sputnik in response to the media reports about the plans of the White House to ask for defense budget hike in 2016.

© Sputnik / David B. Gleason
DoD Says US Fiscal Year 2016 Budget to Reverse Decline in Defense Spending
"The Department of Defense funding is excessive," Ivan Eland, US defense analyst and director of the Center on Peace and Liberty at the Independent Institute, said to Sputnik. "There is no threat to the United States that warrants this kind of spending. This is a budget for global policing rather than defending the United States."

According to media reports, the White House will seek a defense spending increase when it submits its 2016 budget request to Congress next week. The Pentagon's proposal will reportedly be $534 billion, exceeding budget caps by $35 billion.

Eland also argued claims by the Department of Defense (DOD) that sequestration, or budget cuts, are bad for security.

"The long-term security of the country ultimately depends on a strong economy, which is helped by budget reductions, no matter how they are made," he explained. "There is plenty of fat to cut in DOD."

Eland noted that the US economy has been dragged down by excessive national debt, which is expected to amount some 74% of GDP. He stressed that the country can no longer afford the role of "global policeman."

"It must reduce government spending, including that on defense, and renew itself economically in order to ensure that it will remain a great power in the future," he said.

© East News / AP Photo/Manuel Balce Ceneta
US Wants NATO Allies to Spend More on Defense, Buy American Weapons
Bruce Gagnon, a coordinator of the Global Network Against Weapons & Nuclear Power in Space, claimed that as a result of the continued expansion of "US war spending" social progress across the nation continues to be defunded.

"Unemployment grows, education funding is collapsing, the physical infrastructure of the nation is falling apart and the people are more depressed than I've ever seen them," Gagnon told Sputnik. "The demonization of Russia and the fear-mongering about ISIS keeps the people afraid and off balance."

Gagnon said that the 2016 Pentagon funding request indicates an ongoing commitment to empire-building and the encirclement of Russia and China.

"The Navy says their ship building budget is 'unsustainable' as they seek to build more aircraft carriers, new nuclear submarines, and high-tech destroyers outfitted with so-called 'missile defense' systems – all to be used in the confrontation with Russia and China," he explained. "The entire space dominance project of new military satellites, ground stations, launch vehicles, and cyberwarfare is punching a hole in the national treasury."

He believes the 2016 military budget will continue the process of cutting troop levels and benefits while increasing spending on high-tech weapons programs that are already well over budget.

"The weapons corporations, whose stock values have risen in recent years, are driving this expansion of war spending as their profits continue to go up," Gagnon asserted.

© Flickr / U.S. Department of Defense Current Photos
US Missile Defense Agency Spends $58 Million on New Facility in Alabama
He is sure there will be bipartisan efforts in US Congress to remove the sequestration caps on the military budget as both parties now view the Pentagon as "virtually the only federal jobs program."

"Communities across the nation are increasingly becoming dependent on war funding which raises serious moral questions about the 'soul of America' that we have to have endless war in order for workers to feed their families," he explained.

"I cannot confirm any media reports on the pending budget submission," the spokesperson said, noting that it is currently scheduled for February 2.

In December, the US Congress passed a 2015 $585-billion defense bill, funding national security, overseas contingency and an anti-Islamic State campaign.

The US military budget has declined from its recent peak of nearly $700 billion in 2010, according to DOD data. In a global comparison, the United States spends more on defense than the next eight largest countries combined, including Russia, China, Saudi Arabia, France and the United Kingdom, according to figures from the Stockholm International Peace Research Institute.

US Defense Department to Abandon Using 15 Military Bases in Europe