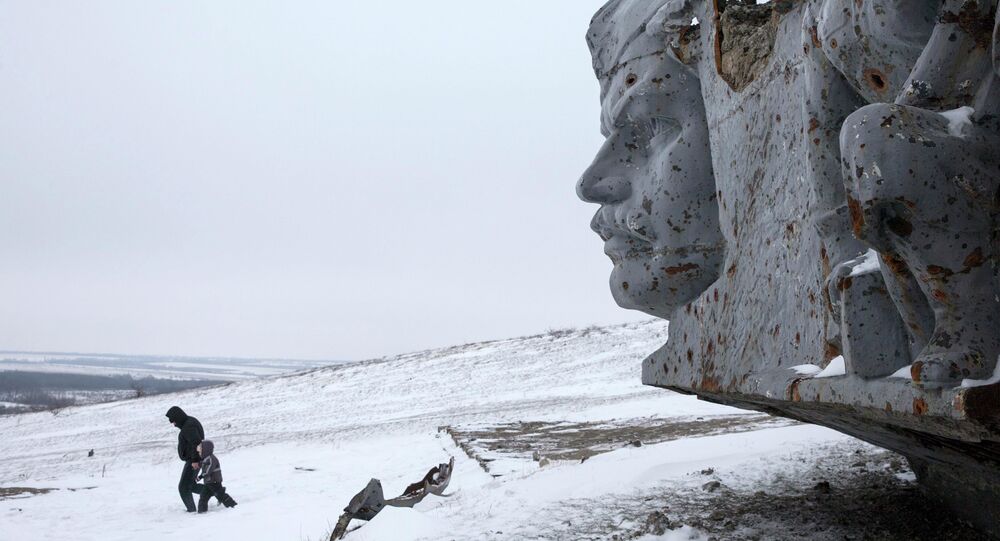 Europe will have to consider building a wall on the border with Ukraine when millions of hungry and desperate Ukrainians flee west, a professor at Moscow's Higher School of Economics believes.

Both the number of casualties and the military rhetoric from both sides of the Ukrainian conflict have increased, with shelling last week in the city of Mariupol leaving 30 civilians dead, while over 100 people have been killed in the town of Gorlovka alone.

"I am afraid that the West is making the same mistakes with Ukraine as it did with al-Qaeda while creating and founding it in Afghanistan… or as it did with founding the anti-Bashar opposition in Syria which eventually turned to a back bone of ISIS," Alexander Domrin, Professor at the Higher School of Economics, told Sputnik.

He underlined that, at some point, "Europe will have to consider building a wall on the border with Ukraine when millions of hungry and desperate Ukrainians will start sneaking into Europe."

© Sputnik / Valery Melnikov
PACE Refugees Committee Delegation Visits Rostov Region
"They won't be just hungry and desperate but well-armed by the United States and NATO," Domrin stated, stressing that nobody needs or wants to bail out Ukraine at this point. The expert pointed out that Europe is already struggling with the economic crisis in Greece, suggesting that the Ukrainian project could soon turn into a nightmare for the European nations.

According to the latest UN report, more than one million people have fled Ukraine due to the ongoing fighting. More than 4,000 Ukrainians have applied for asylum in EU countries, with Poland, Germany and Sweden receiving the highest number of applications, but many more have gone to former Soviet republics, UNHCR figures show.

Professor of Russian and European Politics at the University of Kent Richard Sakwa agrees that, considering the ongoing fighting in Ukraine's eastern regions, the risk of a further exodus is unavoidable. He also lamented the presence of extremist rhetoric in Ukraine.

The fact that the Ukrainian economy is undergoing a meltdown contributes to the push factors for people to leave. The country's banking system is not functionly properly and the national currency, the hryvnia, fell by 48 percent in value against the dollar in 2014, making it the world's worst-performing currency. The Ukrainian economy, being built on deep ties with Russia, has had to adjust in the recent year to the new reality. As a result, the nation's exports in 2014 were down by more than 19 percent in dollar terms and are expected to fall further.

"Nobody needs a strong and prosperous Ukraine," Alexander Domrin, who is also a lecturer at the University of Iowa College Of Law, told Sputnik, stressing that Ukraine is only a tool against Russia.

According to the expert, Ukraine's Western allies want to provide just the minimal required amount of funding to Kiev to keep it as a NATO ally; not to bring it into the Alliance.

"Ultimately, it is not really clear who Ukraine's real friends are," Richard Sakwa agrees, questioning whether Kiev's allies have the idea of a sovereign and independent Ukraine on their agenda.

© Sputnik / Alexandr Maksimenko
VIDEO: Ukrainian Troops Throw Nazi Salute in 'Training'
Both experts no longer consider Ukraine to be a sovereign and a truly independent country since several key positions in the new Ukrainian government were handed over to foreigners. At present, the ministerial posts for the Ministries of the Economy, Finance and Health are held foreign citizens, who were granted Ukrainian citizenship by the Ukrainian President.

"I personally think that it is astonishing that foreigners occupy these critical positions," Richard Sakwa noted, adding that Ukrainians are a talented and well-educated nation that has able people of the appropriate caliber internally. He strongly believes that these appointments are just another indication of the dangerous "idealism" – or ideological extremism – of the current administration.

© AFP 2021 / STRINGER
American Soldiers Caught on Tape in Mariupol? (VIDEO)
According to Alexander Domrin, the foreign presence in the Ukrainian government confirms his beliefs that Ukraine is under external foreign management for now. He believes that quite soon unpopular, antisocial measures will be taken by the Ukrainian government.

"It will be much easier to implement these unpopular measures by foreign hands," the expert asserted stressing that having foreigners in the Ukrainian government is a necessity dictated by its foreign backers.

Western financial institutions and individual donors have promised Kiev billions of dollars in credit to revive its economy and to undertake structural reforms. The International Monetary Fund has pledged $17 billion in loans over a two-year period, while Brussels offered $2.1 billion. Meanwhile, Billionaire financier George Soros, who visited Kiev in the beginning of January, believes that Ukraine will need a $50 billion financing package to avoid a default.