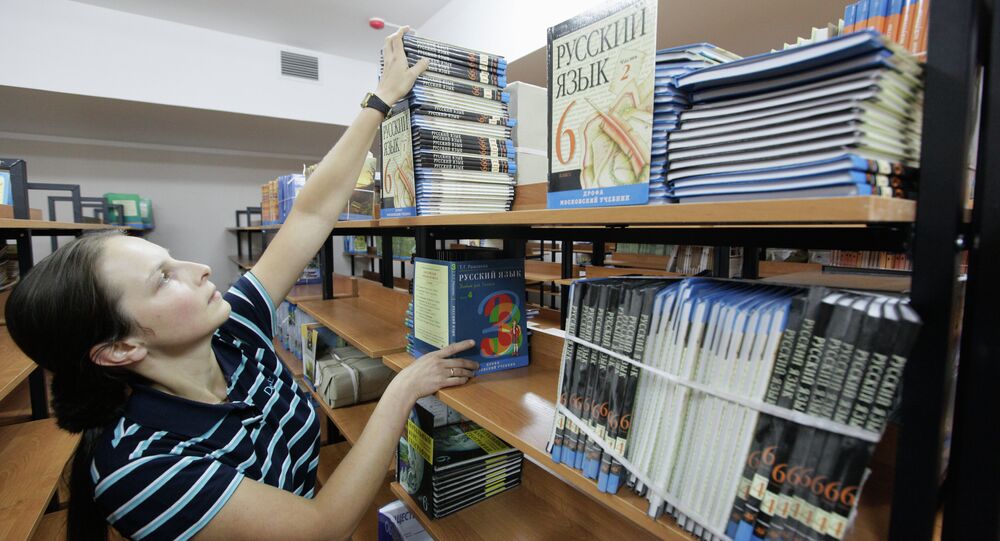 How Can You Actually Benefit From Learning Russian?

The challenge of learning Russian is attracting more and more eager students every year, especially as the country has emerged into a free market economy, where knowledge of Russian opens a world of business opportunities.

MOSCOW, January 27 (Sputnik) — One of the first phrases that a Russian student learns is “Russkiy yazik ochen bogatiy” or “The Russian language is very rich.” There is double meaning in this phrase, in that the complexity of Russian allows for the construction of very beautiful prose and verse; however, the language is extremely difficult to learn in comparison to the Romantic languages. A foreigner who desires to learn Russian quickly learns that the path toward fluency is long and arduous; even for native speakers, upper levels of Russian can present themselves to be quite difficult. Ultimately, the language provides the speaker with depth and complexity not seen in many other languages.

The challenge of learning Russian is attracting more and more eager students every year, especially as the country has emerged into a free market economy, where knowledge of Russian opens a world of business opportunities. According to 8th Russkiy Mir (Russian World) Assembly, which took place in Sochi in early November, there are upwards of 250 million speakers of the Russian language based on 2012 census results. According to Margarita Rusetskaya, Rector of the Pushkin State Russian Language Institute in Moscow, “Russian is a language of great opportunities. Learning it opens up good employment prospects, gives advantages on the job market and provides access to cultural and scientific content.” For a foreign company, the Russian market is very enticing, as many products and services available to Western markets have yet to firmly take hold here, allowing for solid growth and development even in the face of the recent economic downturn.

Students face many challenges when learning Russian. Unlike the Romance languages, Russian requires students to learn the grammar in concert with words and this is where the difficulties of Russian arise. There are six cases in Russian, tricky numerals, and a host of different participles which all contribute to the high complexity of the language. This steep learning curve is good for cognitive development and “it helps one shape some specific cognitive properties.” said Mrs. Rusetskaya. Furthermore, she notes that Russian grammar and style “can be viewed as a cognitive exerciser… [so that] by doing linguistic problems one develops certain intellectual qualities.”

Students start studying Russian for a variety of reasons. For example, Joe, an undergraduate studying Russian in the United Kingdom, told Sputnik “I chose to study Russian because I just simply love Russian culture and history and the language, its complexities, its eccentricities but also its subtle structures.” One of his favorite activities is reading Russian literature and poetry, which he described to be “like a puzzle waiting to be unlocked.” Joe has spent many years studying now, saying “I started when I was 14, doing an hour a week then did my GCSE then my A-level a year after this. Every year I study it more I love it more intensely and fiercely.”

© Sputnik / Alexei Danichev
US Students Come to Estonia to Learn Russian Language
Learning Russian provides more opportunities than reading. Rebecca, who works in London, said “I have been fascinated with Russia since childhood when I saw the beautiful 1965 epic, Dr Zhivago. At high school languages came very easily to me and it seemed natural I would try Russian.” She continued her studies at the University of St. Andrews in the UK where she gained her degree after 4 years. “St Andrews was a great choice. Not only was there a huge expat Russian society to practice with, but the department itself is small and full of really interesting and knowledgeable teachers.” — she said describing her academic life. Now however, her investment into years of learning Russian has paid off, with her excitedly saying “I'm really happy because it's got me an amazing job in the city of London!”

Inside Russia, learning the language is a daunting task for expats. Many of them who are working here for a few months or years seldom choose to learn the language. However, for Hunter, an American expat, he feels “That if you live in a foreign country you should learn to speak their language. It would be rude otherwise not to.” Hunter has recently started using a private tutor in Moscow, taking classes three times a week for 90 minutes. He is quite aware of the challenge ahead, stating “I started studying Russian 6 months ago. By myself. And let me tell you. I'm still quite bad at it.”

Thankfully, the government and universities are actively working to develop Russian programs at home and abroad. Mrs Rusetskaya told Sputnik “The Pushkin Institute regularly receives heaps of international correspondence from Russian Studies, Russian Language or Russian Literature departments at universities, from schools, continuous education programs and hobby centers, as well as language testing centers, asking us to organize training or internship programs, to send our faculty members to teach in their professional growth programs for teachers, to help them develop testing programs and teach Russian to children and teenagers.”  Outreach programs like these are essential to spread the language and ensure students from around the world can have high quality access to resources and teachers.

To accomplish their outreach goals, the Pushkin Institute launched an open distance education portal in September of 2014. The portal is called “Education in Russian” and provides students from around the world to take Russian classes in their own time. For now, according to Mrs. Rusetskaya, “The first level course is already running (A1). The next level, A2, will become available soon. Over 70,000 users from different countries have already registered with our portal.” Currently the website has three different sections: Russian as a foreign language, educational programs for K-12, and a professional support school for those who teach in Russian. The support school is unique, as it offers “professional development programs and issues respective certificates, so that its clients can then work as distance education tutors,” said Mrs. Rusetskaya.

Whether students are learning Russian to explore the culture, find a job, or simply fit into the country, they know that by mastering the language, a world of opportunity awaits. The benefits of learning Russian are endless and more and more students are taking advantage of the programs offered to them, both online and in the classroom. Students today have all the tools they need to develop and master the language, either in Russia or abroad and the number of speakers is only going to increase in the future. Russian truly is a rich language, both in its culture and the economic opportunities it provides.

Russia Better Place for Expats Than US: Survey