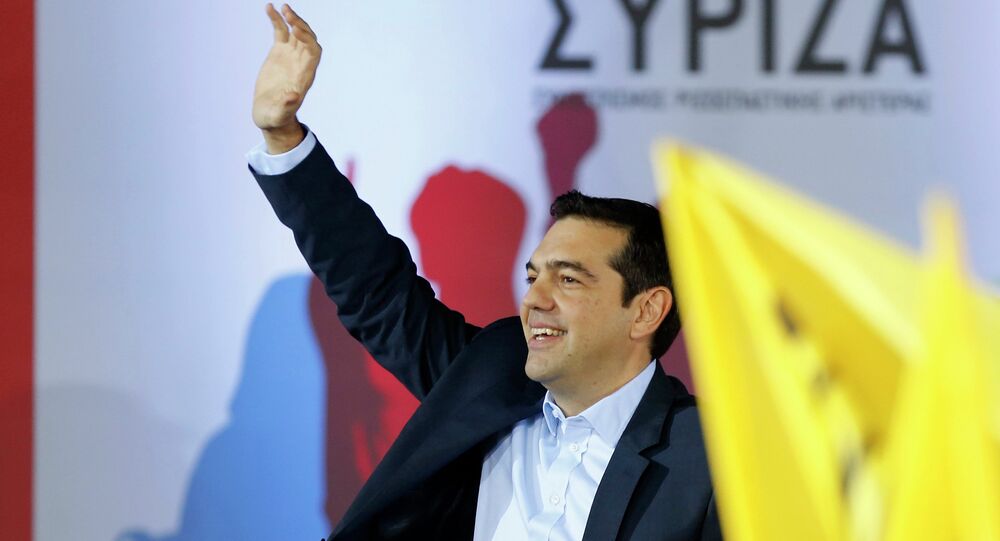 Alexis Tsipras, the leader of the Coalition of the Radical Left (Syriza) pledges to curb austerity measures in the country, write off the bulk of the national debt and to withdraw from the memoranda signed with creditors under which Greece was obliged to coordinate each step it makes.

© REUTERS / Alkis Konstantinidis
Germany's Left Party Says Reduction of Greece's Debt Needed to Help Country
ATHENS, January 26 (Sputnik), Gennady Melnik — Alexis Tsipras, the leader of the Coalition of the Radical Left (Syriza), promised journalists to "put on a tie when we write off our debts" on the eve of his extraordinary parliamentary election.

He was meeting journalists as head of the opposition party, but by Monday he was the new national leader, with preliminary vote counts indicating a sure win for Syriza, which pledges to curb austerity measures in the country, write off the bulk of the national debt and to withdraw from the memoranda signed with creditors under which Greece was obliged to coordinate each step it makes.

Tsipras does not wear neckties. And he started driving a car quite recently. Forty-year-old Tsipras, who has a degree in engineering, always preferred motorcycles, and continued riding his BMW GS 650 even while heading the country’s largest opposition party.

© Flickr / U.S. Department of State
US Plans to Work With New Greek Government, Support Economic Recovery
He became interested in politics at school when he joined the Communist Youth of Greece organization, led by the Communist Party. During his school years he protested against education reform, studied the works of Marx, Lenin, Hegel, Gramsci and Che Guevara. He even named his younger son after the Argentine revolutionary. He is a fan of the Panathinaikos soccer club and used to play soccer with his friends.

In Orthodox Greece, where 98 percent of the population believes in God, Tsipras dared to admit he was an atheist.

"I am not going to hide from you that I do not believe in God, I am not religious. I think it is common knowledge that most of the people in the left movement are not religious," Tsipras said in 2008.

© AP Photo / Thanassis Stavrakis
Greece's Syriza Makes Unrealistic Promises, Should Adjust to Reality
His political opponents are still using this statement against him many years later. It was also brought up when, during a “Blessing of the Waters” ceremony on January 6 at the port of Pireus, Tsipras released a white dove into the sky, a symbol of the Holy Spirit, saying, “Today is an important day for Orthodox Christians, a glorious holiday for the Greek people."

Despite his religious position, Tsipras visited the Holy Mountain of Athos and won over the residents of the Monastic State, who referred to him as “an interesting, polite and inquisitive person”.

"He came with great humility. He behaved the way one ought to behave in this place, he asked what he should do and followed the instructions meticulously," one of the monks told journalists.

© East News / Yannis Kontos/Polaris
Syriza Leader Tsipras Tasked With Forming Government
Unlike most Greeks, Tsipras has a civil marriage to Peristera Baziana, whom he met while they were in college. However, she shuns public attention. They have two children: Phoebos-Pavlos and Orfeas-Ernesto whose second name is a tribute to Che Guevara.

While at university, Tsipras took part in all the major rallies, and, after the split of the Communist Party in 1991, joined the coalition of left forces. As he put it himself, “the conservative way of thinking and management” of the Communist Party of Greece did not fare well with his temperament. He was elected Secretary of the Youth Union at university which he headed for four years. After graduation he set up his own company. However, after five years of professional activities, he switched to politics.

Tsipras has been criticized for populism and being too ambitious, but the young, ever-smiling politician has managed to head the largest opposition party, outpacing experienced political veterans, and to turn “the 4 Percent Party,” referring to the amount of votes Syriza used to win at elections, into a winner.

Tsipras’s political star began to rise in 2008 when he secured 70.41 percent of votes at the election for the chairperson of the Coalition of the Radical Left, and out-stripped the famous politician Photis Kouvelis who only won 28.67 percent.

© REUTERS / Marko Djurica
Compromise Between Syriza, EU Lenders May Be Uneasy, Costly for Tsipras
In 2009, Tsipras topped the party’s election list and became a Greek MP for the first time, although at that time the party had poor prospects, with 4.6 percent of votes and just 13 seats. This aroused discontent among fellow party members, while Kouvelis, who had ceded leadership to Tsipras, and three more members, quit the party to form his own party, the Democratic Left.

In 2012, Tsipras was the main competitor of New Democracy’s leader Antonis Samaras, and was defeated by a close margin of under three percent. Now he has his revenge.

Prior to the May 2014 European Parliamentary elections, Tsipras accepted a proposal to serve as the European left candidate for European parliamentary speaker. It was then that Tsipras became a politician at a European level, established a number of contacts and showed his commitment to resolving Greece’s problems.

"Europe Will Start Changing With Greece"

© REUTERS / Alkis Konstantinidis
High-Ranking Syriza Member Vows to Destroy Triangle of Sin Plaguing Greece
Nobody took Tsipras seriously when he said a couple of years ago that “Europe will start changing with Greece.” The country was deep in recession, while many believed that an official declaration of bankruptcy was just a matter of time.

However, the situation in the country has changed. Due to austerity measures imposed by Tsipras’s main opponent Samaras, Greece survived and even began to emerge from the economic crisis.

But the way it was done made Greeks angry, and they decided that 40 years of power was enough for the Pasok and New Democracy Parties, and it was time for a change in power.

Do you believe SYRIZA can fix Greek economy?
Voted: 1257
All polls
The main slogan of the election campaign – “Hope arrives. Greece moves, Europe changes” – struck a chord in the country.

Many Greeks view 40-year-old Tsipras as a symbol of hope, however, he has become a major threat for the Eurozone for many in Europe. Meanwhile, Tsipras’s promises to make Europe reshuffle its debt policy if he came to power did not just scare many politicians, but garnered support among both the left and the right. Politicians began to call to finally take into account the interests of poorer nations in the EU, whereas the international media took a more favorable stance toward Tsipras.

“The Che Guevara of Europe," wrote the British Telegraph, in its report on Tsipras from Athens, adding that “Eurozone harmony is the last thing on Tsipras’s mind.”

Now everyone is waiting for the new national leader to start implementing his promises, and seeing what impact they will have on harmony in the eurozone.