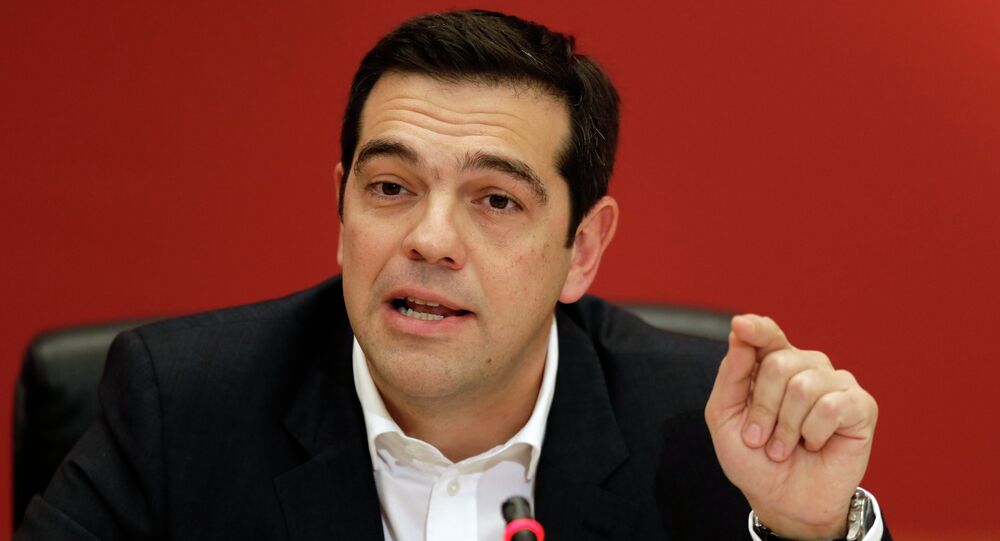 Accodring to an expert, Greece’s radical left-wing party Syriza has made some apparently unrealistic promises over the possible exit of Greece from the Eurozone to their electorate and will have to adapt to a rather harsh reality.

WASHINGTON, January 26 (Sputnik) — Greece’s radical left-wing party Syriza made some improbable promises to the voters, and now has to adjust to a severe reality, Director General of Hellenic Foundation for European & Foreign Policy (ELIAMEP) Thanos Dokos told Sputnik on Tuesday.

“They [Syriza members] have made some apparently unrealistic promises to their electorate and they will have to adapt to a rather harsh reality,” Dokos said.

On Monday, the Syriza leader was sworn in as Greece’s new prime minister, following the party’s victory in Sunday’s parliamentary elections. Syriza gained 36.34 percent of votes, securing 149 seats in the country’s parliament.

Dokos noted that Syriza is an umbrella party with several fractions.

“Therefore there is a lack of homogeneity, as well as a lack of experience, as it will govern for the first time,” he explained, stressing, however, that the majority of the party officials are pro-European and understand the consequences of Greece leaving the Eurozone. “They will try to avoid such an outcome. If they adapt a more realistic agenda quickly enough, it is possible that a negotiation with Greece’s European partners could be successful.”

Greek Prime Minister Antonis Samaras expressed hope that the new government will keep the country in the Eurozone in his brief statement late on Sunday at the elections press center in Athens' Zappeion palace.

Do you believe SYRIZA can fix Greek economy?
Voted: 1257
All polls
Although there have been concerns in Europe over the possible exit of Greece from the Eurozone after the opposition force comes to power, Syriza claims Greece would remain an EU member-state. This falls in line with the sentiments among the Greek population. According to the latest polls, almost 76 percent of the country’s citizens believe that Greece should stay in the Eurozone.

“This is a reality that Syriza cannot ignore. Its official position (and the gut feeling of most of the party members) would be pro-European,” Dokos underlined. “Whether they really understand the rules of the European game, the dynamics and power balance of the Eurozone, and whether the maximalist demands are negotiating tactics it remains to be seen.”

Syriza’s leader Alexis Tsipras has repeatedly vowed that if his party secures victory in the election, it would put an end to the widely unpopular austerity measures imposed by EU bankers, including severe budget cuts and tax hikes.

“Numbers, economic realities and the positions of Greece’s lenders would lead to the conclusion that an abrupt departure from current economic policies would be an unrealistic target. One should aim for more gradual change,” Dokos claimed.

Dokos also noted history has shown that populist parties have a tendency to adapt to reality and become more moderate.

“That was the case of Pasok [social democratic political party] in Greece in the 1980s,” he said. “One should remain optimistic that Syriza will follow this pattern.”

Earlier on Monday, Syriza reached an agreement with Independent Greeks to form a government by creating a coalition, with Tsipras expected to announce his cabinet later. Tsipras then informed the Greek president about an agreement to form a coalition that will secure enough votes to support the operation of the new government.

On Sunday, Tsipras said that Greece’s political course would continue to be pro-European after the election, but pointed out the necessity to depart from the European Union’s austerity policy. Back in 2010, three international creditors, including International Monetary Fund, the European Union and the European Central Bank, agreed a $146-billion bailout package for Greece to prevent a default on its large debt.