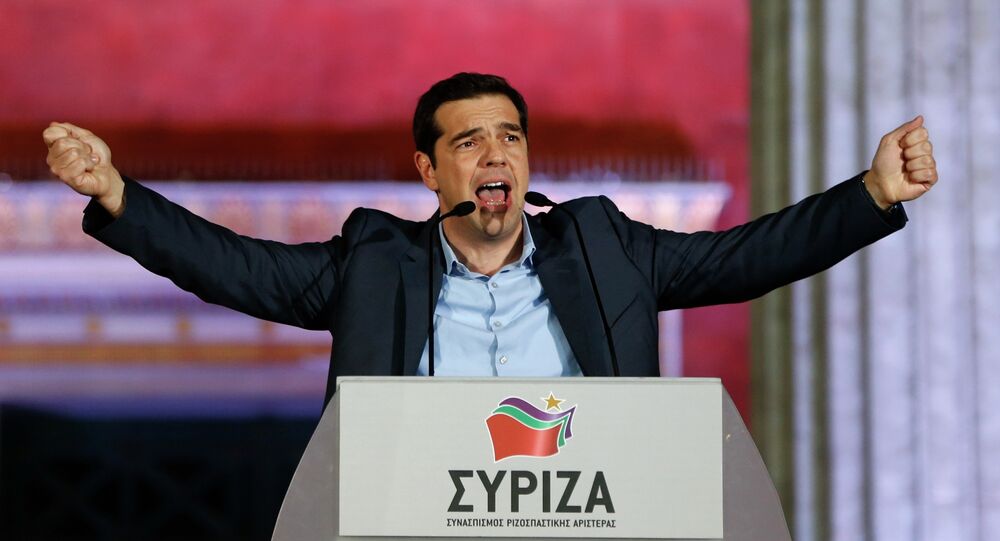 A compromise that the new Greek government and European lenders need to find on the question of the Greek debt is urgent, as Greece has to conclude the last review of its Economic Adjustment Program by the end of February.

© REUTERS / Lefteris Pitarakis/Pool
Experts Say Viability of Coalition Between Far-Left Syriza and Far-Right Independent Greeks Doubtful
MOSCOW, January 26 (Sputnik), Anastasia Levchenko — Alexis Tsipras, who has been sworn in as the new prime minister of Greece, will most likely have to renege on his radical pre-election promises while negotiating with European lenders, but still has the chance to persuade EU leaders to find a commonly acceptable solution, analysts of Greek policy told Sputnik Monday.

"I guess one important ace that Alexis Tsipras [Syriza leader] has up his sleeve is that he can actually present himself to Brussels having a strong mandate; he can present himself as an honest broker for real structural reforms. If he is able to convince European leaders that he is really the one and only who can carry out deep institutional reforms… then I think concessions are possible, and I think the solution is possible as well," Julian Rappold, program officer of the Alfred von Oppenheim Center for European Policy Studies at the German Council on Foreign Relations, told Sputnik.

© East News / Yannis Kontos/Polaris
Syriza Leader Tsipras Tasked With Forming Government
The compromise that the new Greek government and European lenders need to find on the question of the Greek debt is urgent, as Greece has to conclude the last review of its Economic Adjustment Program by the end of February, Rappold explained. Otherwise, Greece will have to "return leftover bank rescue funds and will not be able anymore to refinance itself via the European Central Bank".

In 2010, a so-called troika of international creditors agreed a 110 billion euro ($146 billion) bailout package for Greece to prevent a default on its large debt.

However, the results of the negotiations with the creditors are still likely to be far from the pre-election promises of Tsipras, according to political scientist Stathis N. Kalyvas.

"I take Mr. Tsipras' statement to be his opening salvo in a negotiation process which is likely to yield some benefits for Greece, possibly in the form of extended maturities and lower interest rates. I do not think it is realistic to expect a significant haircut at this point or significant compromises on conditionality… Hence, what Tsipras is likely to obtain will be likely far from his ideal point," Kalyvas, Arnold Wolfers professor of political science and director of the Program on Order, Conflict, and Violence at Yale University, told RIA Novosti.

Do you believe SYRIZA can fix Greek economy?
Voted: 1257
All polls
Among other promises made by the Syriza party on economic policy, there have been pledges to significantly increase public expenditure, reduce taxes, and roll back some of the market liberalization and public administration reforms that have been undertaken since the beginning of the crisis.

This policy may lead to a significant primary deficit, just after the country managed to achieve a primary surplus in 2013, and eventually cause a standoff with European lenders, according to Dimitri Vayanos, head of the Department of Finance at the London School of Economics.

"Syriza's desired policies would put Greece in a clear standoff with its official lenders. The most official lenders would be willing to do is to grant Greece a further debt reduction by extending the maturity of the debt. But they would certainly not agree to finance primary deficits," Vayanos told RIA Novosti.

The expert noted that Greece still depended largely on its creditors' financial assistance, and may have to "do a big U-turn" in order to retain it.

According to the official results of the elections, radical left-wing party Syriza gained 36.34 percent of votes and secured 149 out of 300 seats in the parliament. A total of seven parties passed the threshold to be included in the Greek parliament. Alexis Tsipras has been sworn in as the new prime minister of Greece and is expected to announce his cabinet within 24 hours.