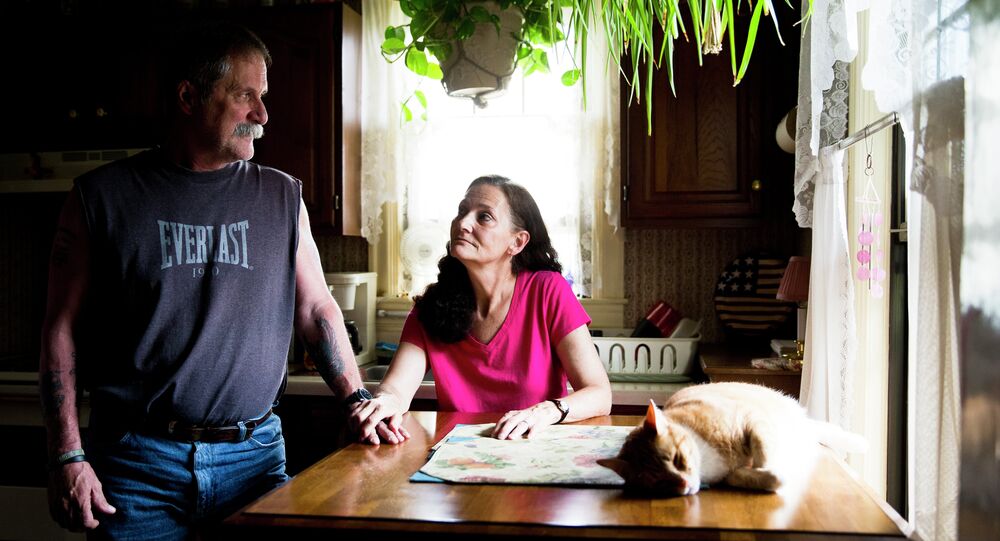 Since 2000 the share of the middle-class has continued to shrink, mostly because more Americans have moved to lower-income groups.

© REUTERS / Kevin Lamarque
Obama to Address Struggling Middle Class by Raising Taxes for Rich
MOSCOW, January 26 (Sputnik) – The middle class, proclaimed by US President Barack Obama in his State of the Union address the foundation of the American economy, has been shrinking for almost 50 years and has undergone an upheaval, according to New York Times.

However, since 2000, the share of the middle-class has continued to shrink, mostly because more Americans have moved to lower-income groups.

Moreover, the traditional image of the middle-class household – a married couple with kids at home, started to erode. As a result, only the elderly could fit this image.

This social changes could help explain why Obama has paid much attention to reviving the middle-class with a series of proposals such as paying for a college education, taking parental leave or buying a home.

"The term itself is so amorphous that politicians often cite the group in introducing proposals to engender wide appeal," New York Times wrote.

According to the definition, middle class starts at $35,000 – which is about 50 percent higher than the official poverty level for a family of four – and ends at the six-figure mark. Although many US households making more than $100,000 a year consider themselves middle class, actually they have much more money than most people.

Whatever the definition could be, it is clear that millions of Americans are barely able to afford accouterments that most experts consider essential to a middle-class life, the newspaper says.

"I would consider middle class to be people who can live comfortably on what they earn, can pay their bills, can set aside something to save for retirement and for kids in college and can have vacations and entertainment," said Christine L. Owens, executive director of the National Employment Law Project, as quoted by New York Times.

What is more, the US middle class has undergone a serious transformation. The 53 million households that remain in the middle class (about 43 percent of all households) are different from their predecessors of a previous generation, New York Times claims on the basis of a census data analysis.

In recent years, the fastest-growing part of the new middle class has been households headed by people at the age of 65 and older. Now the elderly have better retirement benefits than previous generations. Besides, older Americans are increasingly working past traditional retirement age.

As a consequence, while median household income on average has reduced by nine percent since 2000, it has jumped by 14 percent among households headed by older adults.

In their turn, married couples with children – the backbone of the middle class – are rapidly diminishing. In the late 1960s, about 45 percent of all households included married adults and their kids. Among middle-class households, more than 60 percent had that traditional family.

Nowadays, married couples with kids make up just a quarter of households. Even if they diminished as a share of the population, they moved up the income ladder. By 2000, 42 percent earned more than $100,000 in today’s dollars.

However, the recent recession undermined the well-being of that social group. Its share in the middle class has narrowed by 3 percentage points and the share earning less than $35,000 has increased, according to the New York Times data.

Finally, there are two more important factors – education and geography.

Now, most middle-class adults get their status through higher education. In 1992, 50 percent of all middle-class households were headed by someone with a high school education or less. Today, only 37 percent of the middle class has not attended college.

As for geography, the biggest declines in middle-class households over the past 50 years occurred in the Northeast where industrial economies gave way to suburbanization and increased affluence.

According to a New York Times poll in December, 60 percent of people who call themselves middle class believe that if they work hard, they will get rich. However, the evidence suggests the goal is unattainable so far.
"The middle has basically stayed the same; it hasn’t improved," said Lawrence F. Katz, an economist at Harvard University as cited by New York Times.

"You’ve got an iPhone now and a better TV, but your median income hasn’t changed. What’s really changed is the penthouse has become supernice."

The problem stems from the US governments insistence on keeping older voters happy. Older voters turn out in much higher percentages than young ones. As such, most politicians have tailored their policies towards the slowly aging baby boomers. This demographic has already filled their pension accounts with equities and other assets and so any downturn in the stock market or housing market deeply affects them much worse than younger people. The US government has made a point making sure both of these markets are kept high and do not suffer the same loses as what happened in 2008. So in turn, it is unaffordable for young people to purchase homes and start families. The fixed income generation is robbing their children of their livelihoods and are condemning them to lower wages and higher taxes so they can benefit from healthcare and welfare services.

Obama's proposed policies are nothing more than fluff however. The funding for his proposals has to come in the form of taxes, however, average median wages in the US have slowly been declining since the 1970's. More and more American's are falling below the poverty line, increasing the amount of government subsidies necessary to sustain a low wealth population, while at the same time, increasing the tax burden on those people who earn a decent wage. Thankfully for the middle class, Obama's proposals will never be passed until the Republicans are unseated from Congress.