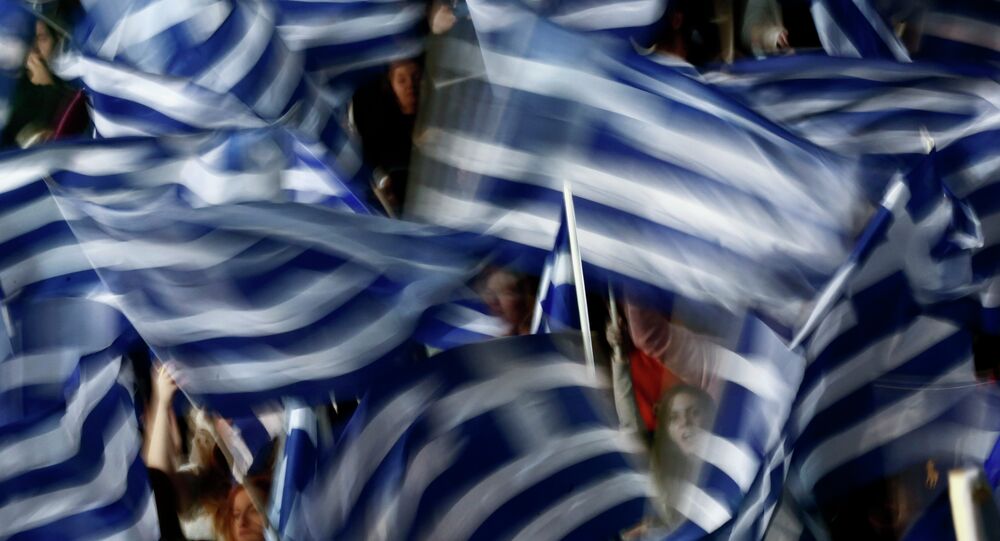 Experts on Greek policy claim that although recent polls predict a victory for left-wing opposition party Syriza at the general elections in Greece on Sunday, it is not still clear whether it will manage to gain an absolute majority and form the government alone.

MOSCOW, January 23 (Sputnik), Anastasia Levchenko, Daria Chernyshova — Although recent polls predict a victory for left-wing opposition party Syriza at the general elections in Greece on Sunday, it is not still clear whether it will manage to gain an absolute majority and form the government alone, experts on Greek policy told Sputnik on Friday.

"The polls today are showing that the difference between Syriza, the first party, and New Democracy is widening. It is about five percent. So it looks like Syriza will come first. The question is whether they will achieve an absolute majority. We will not be able to say that until Sunday, because of the percentage of undecided voters which is still at about 10 percent," Stella Ladi, member of the executive committee of the Greek Politics Specialist Group (GPSG) of the UK's Political Studies Assocation told Sputnik.

Yulie Foka-Kavalieraki, doctoral candidate at the University of Athens and Co-founder of GreekCrisis.net echoed the opinion of the GPSG expert and claimed it is still not “certain whether it [Syriza] will also win the absolute majority or it will have to form a coalition government.”

In any case, the main challenge for the party should it come to power is expected to be finding a compromise with its European partners.

© Sputnik / Vladimir Rodionov
Greece to Hold General Elections on January 25
On Thursday, Syriza's leader Alexis Tsipras claimed that his party would put an end to the unpopular austerity measures imposed by EU bankers, which he called a "national humiliation", addressing the party's supporters on the last day of the election campaign.

"The party has a quiet radical pre-election manifesto. They want to end austerity, they want to re-negotiate the economic adjustment program and re-structure the debt, but I think in reality if they come to power they will have to negotiate all this with the European partners and see how far they can go," Ladi told Sputnik. "Syriza cannot really go too far with the radical propositions, and they have to find the way to come to an agreement with the European partners," she added.

Since December, when the Greek parliament was dissolved after the country failed to elect a president and Syriza started leading the polls, there have been growing concerns in Europe over Greece’s possible exit from the Eurozone if the opposition force comes to power.

Nevertheless, the party claims Greece will remain a member-state, which falls in line with the sentiments among the Greek population, according to recent polls. However, there are still many issues for the future Greek government to negotiate with its EU partners.

"Until now, Syriza has claimed it will radically re-negotiate the bail-out agreements with the troika [International Monetary Fund, the European Union and the European Central Bank] by making suicidal threats, like suspending debt payments and exiting the Eurozone… If the EU and the ECB yield to Syriza's demands, an avalanche will be set off and they know that. So, I do not think anybody will let Syriza do that," Foka-Kavalieraki speculated.

Syriza's promise to cancel austerity measures is also unlikely to be implemented by the party under the current conditions, according to Stella Ladi.

In 2010, a troika of international creditors agreed a 110 billion Euro ($146 billion) bailout package for Greece to prevent a default on its large debt.

The major points of Tsipras' agenda are debt relief, a crackdown on tax evasion, as well as the introduction of economic reforms to secure prosperity in Greece.