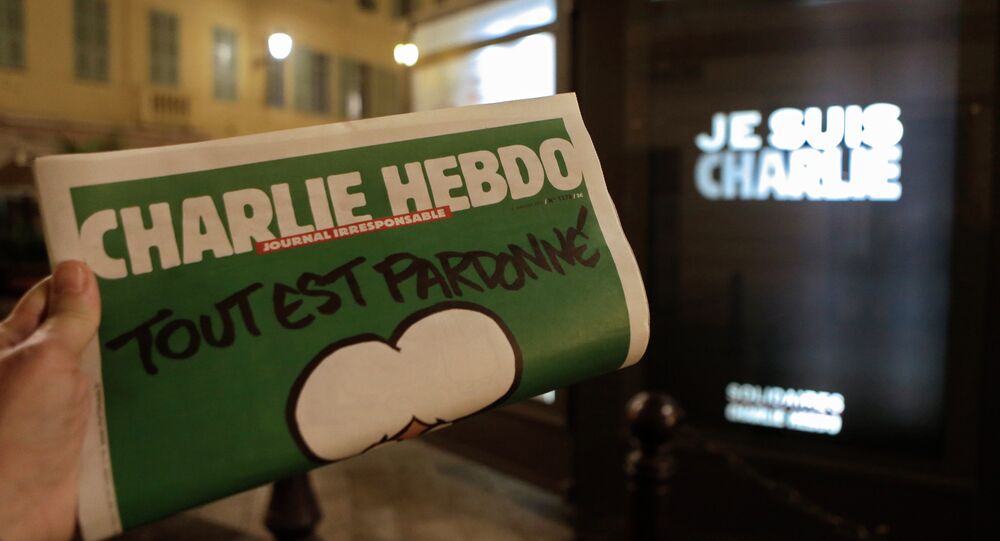 Experts claim that the recent cover of French satirical magazine Charlie Hebdo could be seen as a decision to exercise the right to freedom of speech, but it can have a negative effect on French society.

WASHINGTON, January 15 (Sputnik) – The recent cover of French satirical magazine Charlie Hebdo depicting Prophet Mohammed could be seen as a decision to exercise the right to freedom of speech, but it can have a negative effect on French society, experts told Sputnik on Wednesday.

“I don’t think that anyone can question whether this newspaper has the right to print this picture, this image on its cover. I think there is something of a question of whether this was, in social terms, the appropriate thing to do at this time,” Director of Ali Vural Ak Center for Global Islamic Studies at George Mason University Peter Mandaville said. “At the times when there is risk of increased polarization of the society, the risk of increased hostility towards Muslim community in France, there is a question of what this choice does to the overall social temperature in the country.”

© Flickr / tinou bao
Turkish Court Bans Websites Depicting Latest Charlie Hebdo Cover
On Wednesday French satirical magazine Charlie Hebdo published its first issue after the horrible massacre at its Paris headquarters last week. The front page depicted Prophet Muhammad holding a sign "I Am Charlie” in French. This slogan has been used around the world to show solidarity with the brutal killings.

Professor Mandaville explained that the French Muslim community found itself in a difficult position. There are many French Muslims who have strongly condemned criminal, violent acts of terrorism. At the same time, they would want to voice disagreement with the editorial orientation of the magazine. However, if French Muslim leaders condemn the printing of the Prophet Mohammed caricature, in the eyes of general public they look like “intolerant French Muslims,” Mandaville said.

“In this case, satire is not directed against the wealthy, the rich, the powerful, the state, the military, but rather towards the community that is already the most marginalized and dispossessed in their own country. French Muslims are the children of the former French colonies, among the poorest in France, and already demonized by a significant percentage of French society. I don’t see this as satire, but rather as bullying and racism,” Professor of Asian and Middle Eastern Studies at Duke University, Director of Duke Islamic Studies Center Omid Safi said.

He pointed that 27 percent of French people did not like Muslims before attacks on Charlie Hebdo occurred.

© REUTERS / Nacho Doce
New Charlie Hebdo Issue With Prophet Muhammad on Cover Published in France
“Obviously, if one is satirizing the French political elite, that’s fine. They are in the position of power. The Catholic church and other Christian institutions in France are not in a position of actual jeopardy. Muslims and other immigrants in the country are,” Professor Mandaville said.

It’s quite appropriate to use satire as a way to deal with some issues, but there should be a distinction between satire and racism, expert explained.

“I think that some of the work of Charlie Hebdo has sometimes crossed that line on the side of racism,” Mandaville added.

Director of Duke Islamic Studies Center Omid Safi expressed another concern about double standards that could be seen in the actions of Charlie Hebdo managing team.

On Wednesday al-Qaeda's affiliate in Yemen claimed responsibility for the deadly attacks on the Charlie Hebdo Paris offices that killed 12 people, including 10 magazine staff. It warned that more terrorist attacks will happen in the future, if Western countries continue their "insults," according to an internet video released by the group.