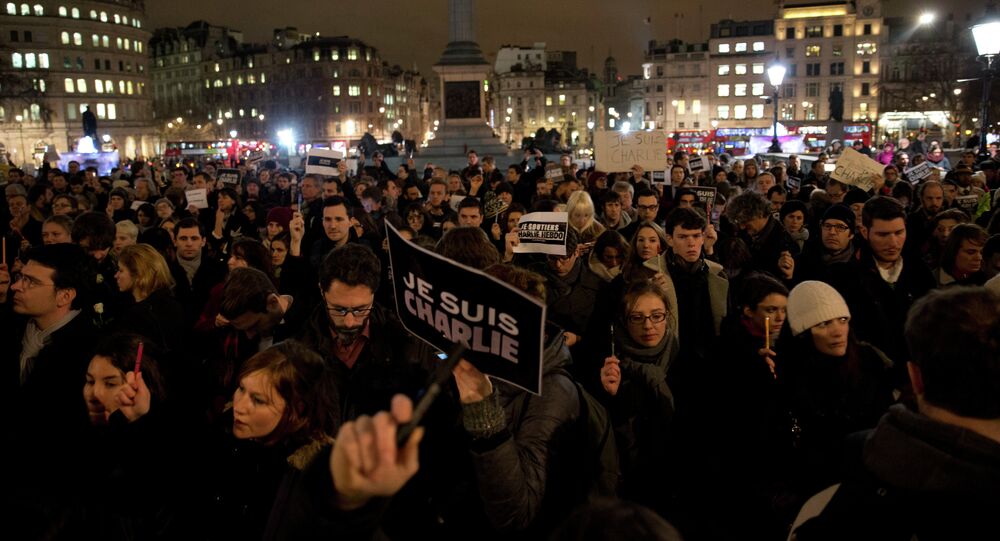 Although Europe "has traditionally been very laissez-faire in its attitude toward all cultural communities," the deadly attack on Charlie Hebdo will become a wake-up call for Europeans, an expert told Sputnik.

"The Charlie Hebdo incident — in some ways similar to the 9/11 incident in the US 14 years ago — is thus a wake-up call for Europeans to consider if their laissez-faire attitude is in need of tweaking," said Kumar Ramakrishna, a head of the Centre of Excellence for National Security (CENS) at the Rajaratnam School of International Studies (RSIS) in Singapore.

The expert explained that Europe "has traditionally been very laissez-faire in its attitude toward all cultural communities, including immigrant ones, in a sort of live-and-let-live fashion." However, this makes "European societies vulnerable to certain fringe elements of certain cultures, immigrant or otherwise, that are animated by religiously supremacist, totalitarian ideologies that may under some conditions possess a latent potential for violence," he said.

© REUTERS / BGNES/MARICA
Frenchman Arrested in Bulgaria Allegedly Linked to Charlie Hebdo Attackers
There is no universal solution to this problem, Ramakrishna noted. "In the end, each society must decide on the appropriate balance between freedom and order that its constituents can live with," the expert said.

On January 7, Cherif and Said Kouachi carried out an attack on the office of Charlie Hebdo, a satirical magazine, leaving 12 people killed and 11 injured. The brothers, French citizens, were killed during a police operation in Dammartin-en-Goele two days later.

Children of Algerian immigrants, the Kouachis were raised in orphanages, according to BBC. However, social backgrounds of those, who turn to terrorism, may differ across Europe. In the UK they are mostly "from well integrated middle class families with little previous interest in religion," Hugh Lovatt, a Middle East policy fellow with the European Council on Foreign Relations, told Sputnik. French terrorists come from "under-privileged backgrounds with many having had previous criminal records for petty crimes before turning to terrorism," he added.

© AFP 2021 / BRENDAN SMIALOWSKI
Who Trained Charlie Hebdo Attackers: An Insider Look to the Terrorist Recruitment Process
Nevertheless, people, who turn to extremism, share a "sense of complete alienation and a rejection for the values of those societies in which they were brought up in," Lovatt said. "A common theme though tends to be a strong desire to act against (and ultimately avenge) the perceived harm inflicted against (Sunni) Muslims as a result of US or European policies," he added.

"Un-governed spaces on Europe’s periphery where violent conflicts are taking place (such as in Libya, Syria, Iraq, etc.) also act as fertile ground for further radicalization and training," Lovatt added. Indeed, Said Kouachi traveled to Yemen in 2011. While there, he allegedly met with Anwar al-Awlaki, who was at the time one of the leaders of Al-Qaeda in the Arabian Peninsula.