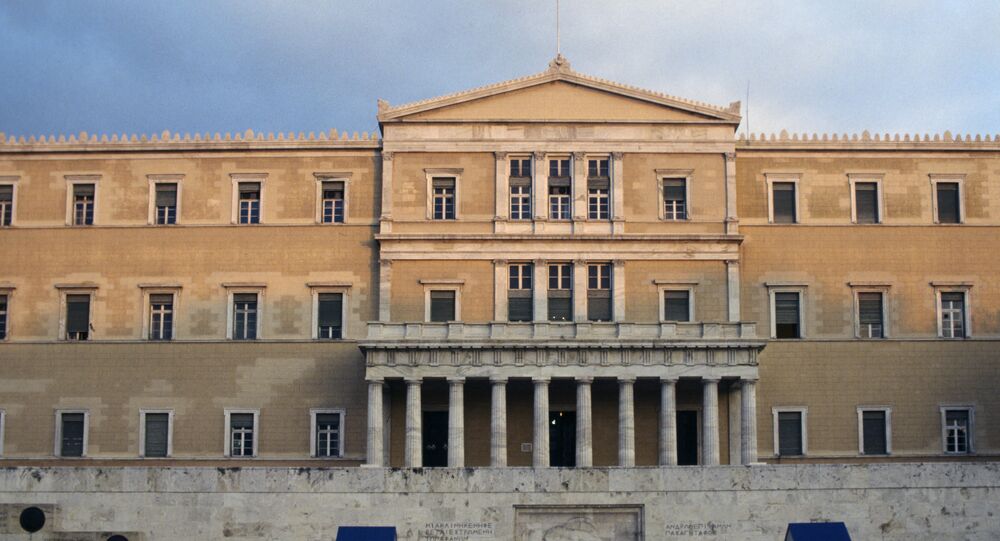 Experts forecast that Greece faces internal turmoil if it leaves the eurozone following snap parliamentary elections, while other European states will be encouraged to play a similar "game of brinkmanship" with Germany.

On January 25, Greece will hold snap parliamentary elections after the current parliament's dissolution over its failure to elect a new president after three attempts. In the event that the left-wing opposition party Syriza, led by Alexis Tsipras, wins, many expect the country to leave the single currency market.

© REUTERS / Eric Vidal
Eurogroup to Continue Cooperation With Greece After Elections
"A Greek exit will certainly create turmoil – despite the assurances by the European political and financial authorities," Aristides Hatzis, professor of law and economics at the University of Athens, said.

"On the other hand, if a populist party in Greece succeeds in changing essential terms of the bailout agreement, this will create incentives for Spanish, Italian and French voters to play the same game of brinkmanship with Germany," he added.

Hatzis further explained that a Greek exit would be messy in the short term and devastating in the long-run, because Greece is not self-sufficient in food, energy and pharmaceuticals, meaning the Greek people will suffer greatly.

Zsolt Darvas, who is a visiting fellow with the Brussels-based Bruegel economic think tank, agrees that Greece will not be able to cope on its own. He stressed that even though the elections are still wide open, the possibility of a Greek exit is on the table.

"I think that scenario is currently on the table. In that case I expect that there will be very dramatic developments in Greece – the financial system will almost completely collapse, because they will have no access any more to the financing facilities of the European Central Bank," Darvas told Sputnik adding that Greece will see GDP contraction, increasing unemployment, stricter capital controls, as well as a banking system collapse.

According to Hatzis, Syriza stresses its willingness to "tear up" Greece's bailout agreements, but that this could be possible if Syriza manages to attain a powerful majority in parliament, something he considers unlikely.

"A coalition government with Syriza as the main partner will probably try to renegotiate some of the terms of the contract. At the end of the negotiation the bailout agreement won't be very different from the current one," Hatzis believes.

Carnegie Europe's visiting scholar Stefan Lehne noted that Syriza has recently adopted more moderate policies, although it used to be very critical of the bailout program "and seemed to question the further servicing of Greece's debts."

"If the party actually wins and if it adopts radical policies this could put into question the future of the country in the Eurozone," Lehne said adding that Greece made significant progress in reducing the deficit and returning to growth. "[Greece] should be able to leave the current bailout program within a few months. The current concerns are political in nature, not economic."

Zsolt Darvas stressed that Tsipras will not be able to change what has been negotiated by the previous government.

© REUTERS / Alkis Konstantinidis
Greek Left-Wing Party Leader Promises to Abandon Austerity Policy
"Overall, if Mr. Tsipras wins, in my view, there will not be a final conclusion of the current bailout program, meaning that the last tranche, which is about 2-3 billion euros, will not be paid to Greece," Davras said.