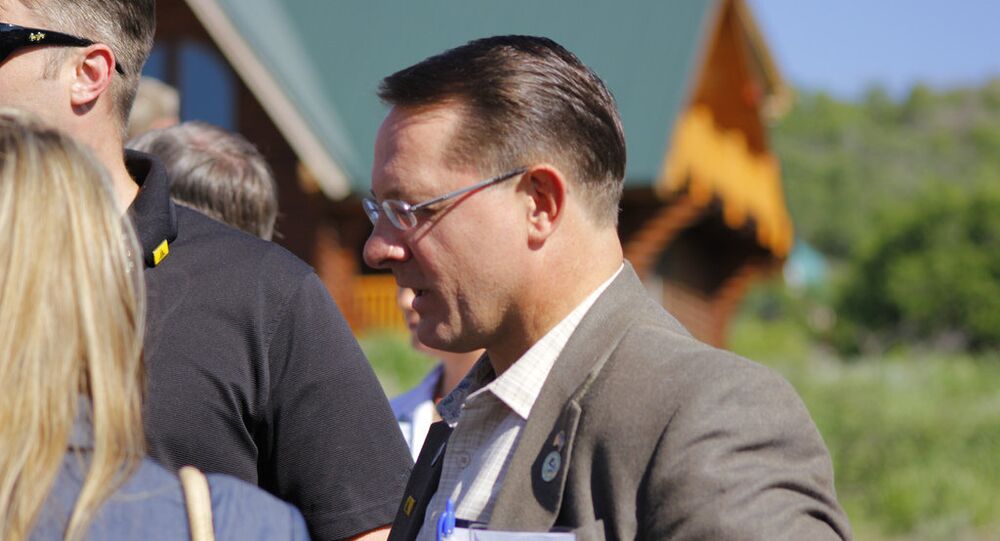 WASHINGTON, January 1 (Sputnik) – The December 31 deadline for the US federal government to transfer millions of acres of public land to the State of Utah has come and passed, but the leader of the movement supporting the transfer told the Sputnik news agency he vows to continue pushing for state's rights.

"Our federal partner has by inaction shown that it has not intended to work with us in good faith," Utah State Representative Ken Ivory told Sputnik. "So from this point forward we will continue to secure our same rights that were granted to all states east of Colorado through education, negotiations, legislation and litigation," he added.

At issue is 35 million acres, or about two-thirds of Utah's land, that is controlled by the federal government under agreement when Utah became a state.

Ivory, who is also the president of the American Lands Council that advocates for the return of public lands to Western states, has led the campaign in Utah, sponsoring the Transfer of Public Lands Act that passed the Utah state legislature requiring the federal government to transfer the land to Utah by December 31, 2014.

Ivory and those advocating for the return of public lands argue the language granting Western states statehood is word for word the same as many other states east of Colorado, where much of the federal public lands were given back to the states.

"Why are you treating us unequally?" Ivory and the public land movement ask of the federal government.

Federal land control is concentrated in the western United States. Whereas the federal government controls 47 percent of land in the 11 states west of Colorado, and 62 percent in Alaska, the federal government only controls 4 percent in the eastern half of the country, according to a Congressional Research Service analysis of federal public lands.

Ivory said states and local government could better manage land than the federal government. Regulatory bureaucracy is cumbersome at the federal level, he said, whereas local government is quicker and more efficient. And it may even be more profitable. One nearly 700-page study conducted by three Utah universities found that under certain assumptions the state could stand to gain from the land transfer.

However, conservationists, the multi-billion dollar tourism industry, and wildlife and hunting groups have come out against the campaign, questioning the cost, legality and motive of the public lands transfer movement.

Jessica Goad, the advocacy director at the Center for Western Priorities, a conservationist group, told Sputnik public land transfer as envisioned in Utah would be costly, legally questionable and potentially lead to mismanagement.

She said the same study that the public land transfer advocates use to argue Utah could afford the cost of maintaining public lands, makes a number of unreasonable assumptions including the high price of oil, which has slumped to 5-year-lows this month. She also said there was concern states would privatize the land, "selling off lands to make a quick buck in order to be able to afford it." The states will also, she said, quickly open public lands to oil and gas drilling.

Ivory called such accusations "fear mongering," while also noting oil and gas are a "very big opportunity" for Utah.

Ivory conceded the drop in the price of oil affects the economics of public land transfer, but doesn't affect that "we want autonomy, govern ourselves and not be treated as a colony or territory." He added that anybody who thinks oil price will be the same in five years is "delusional."

Questioning the legality of the public land transfer movement, Goad noted that Congress had authority over public lands and would have to pass laws to give the land back to states. While the state of Utah has threatened to sue the federal government, Goad said a legal battle would also be costly and lead nowhere in the courts. A paper on the issue by two professors at the University of Utah found "the transfer movement's legal strategy is not viable."

In the end, Goad said the public lands transfer movement was more political than practical. "This is a messaging war about throwing the red meat out there for conservative constituents for a lot of the politicians. It's an issue that is easy to make noise about but really hard to enact," she said.