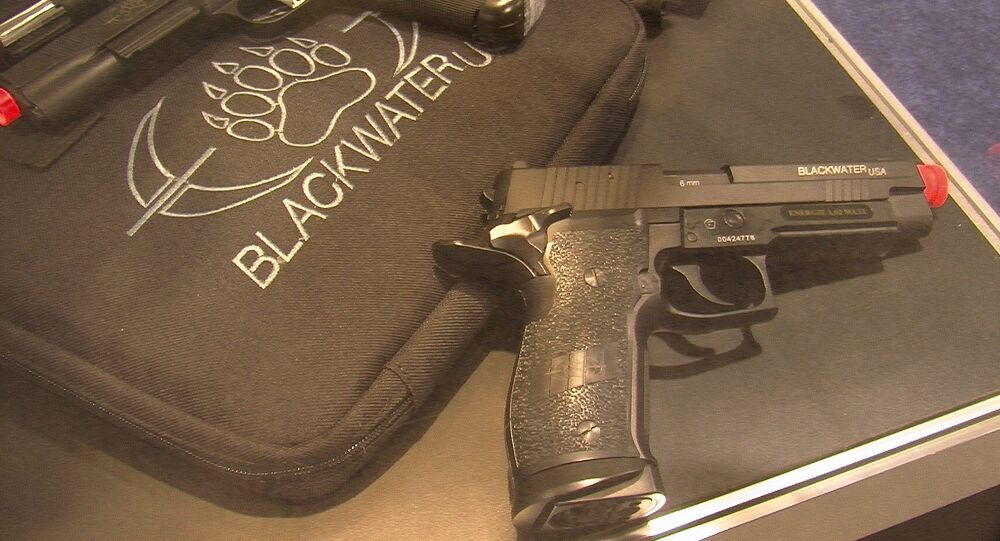 Academi, formerly and more popularly known as Blackwater, is back in the news as reports are trickling in that they’ll train an “experimental battalion” of 550 Ukrainian soldiers in urban warfare next month.

The source, who spoke to Russia's ITAR-TASS news agency, specified that the $3.5 million training will include “marksmanship, operations by assault groups in urban conditions, close combat and combat and logistics support for the battalion”, areas of focus that Blackwater is intimately familiar with from its time in Iraq. In fact, if its deployment there is any indication, then it may be training Ukraine’s “experimental battalion” to carry out the same carnage in Donetsk in the future that Blackwater did in Baghdad in the past. It’s an open secret that the ‘ceasefire’ hasn’t’ ceased any firing on either side, and Kiev’s’ forces seem to be gearing up for a continuation of war. Urban warfare training won’t help them stop a mythical Russian invasion (likely to be fought more in the fields than the foyers if it did happen), but would definitely come in handy in subjugating the self-defense forces in Eastern Ukraine’s main cities.

The American mercenary company has a shady and controversial history. They catapulted to global notoriety in 2007 after several of their employees opened fire in one of Baghdad’s main squares, killing 17 people over what they ostensibly claimed were ‘defensive’ reasons. Earlier this year, all four of the indicted suspects were found guilty of either manslaughter or murder and sentenced to lengthy prison terms. Still, the Baghdad episode placed such a stain on the company’s name that they rebranded to Xe in 2009 and then to Academi in 2011.

Some of the other fallout that resulted from the scandal was that the world of ‘private military companies’ or PMCs (as they’re called in the industry) was exposed to the eyes of the public. It became apparent that Blackwater wasn’t just the first of its kind, but rather one of many shadowy military organizations that popped up over the decades and were now working hand-in-glove with various governments. In fact, it was revealed that many PMC employees are actually former military servicemen and women who essentially transfer their former armed forces’ training down the ladder to ‘private security’ individuals all across the world, leading to a difficult-to-control dissemination of lethal knowledge.

Since Blackwater was officially contracted by the US to perform services in Iraq, it became widely perceived that it and other PMCs in Iraq were behaving as private extensions of the US Armed Forces. Investigative journalists then began researching the relationship between the Pentagon and PMCs and discovered that they may be deployed in more countries than either side publicly admits to, such as in Pakistan. Most recently, German media reported in May that Blackwater (now known as Academi) was active in Eastern Ukraine, although the company categorically denied this.

Given its reputation, it’s likely that Kiev knows exactly what kind of specialized training to expect from Blackwater when it trains hundreds of its troops next month. The reason they went through the PMC and not the US government was likely to provide Washington with a thin semblance of ‘plausible deniability’ in having anything to do with training Ukrainians to kill their own people.

Of course, it’s now public knowledge that the US passed legislation in December to arm Kiev’s forces, but there’s a difference between giving someone the guns to kill their ‘shared enemy’ and actually showing them how to use these weapons to maximum efficiency, which is what Blackwater will be doing. Also, the US advisors that have been publicly acknowledged to have been in Ukraine since this summer likely didn’t partake in such focused exercises, since their objectives were more broad and theater-wide at the time than teaching grunts how to clear apartment blocks and engage in door-to-door shootouts.

Thus, what Blackwater brings to the table is precisely the specialized knowledge that Kiev’s forces are clamoring for in the event that they initiate a continuation war sometime in the future. It doesn’t matter if it’s actually important for their war efforts or not — what is salient is that Kiev is looking for urban warfare training and Blackwater happens to provide just that, likely with a wink and a nod from the Pentagon. This ‘X’ factor, the intangible ‘benefits’ that one receives while being trained by ‘experts’, is what explains Blackwater’s real attractiveness to Kiev’s political and military elite.

When they first initiated the reprisals in East Ukraine last spring, Kiev’s forces had none of the ‘expert training’ that could have been the ‘X’ factor in tilting the war in their favor, hence their devastating losses and eventual overreliance on Nazi-affiliated militias. Now, however, if the Blackwater trainings are a ‘success’, then over half a thousand Kiev-controlled units will become versed in the art of vicious urban warfare, and what’s more, they can then transfer these skills down to their underlings and ‘spread the knowledge’ far, wide, and without having to pay for more costly contracted trainings.

So why now, and why would Kiev be interested in Blackwater’s ‘services’ at this moment of time? Well, besides the fact that the ‘ceasefire’ never really existed, the Minsk Accords stipulate that Donetsk and Lugansk’s self-rule statuses will be in effect for three years, after which they will formally revert back to Kiev’s authority. Most observers are of the disposition that the east will not peacefully allow this to happen without serious constitutional changes in Ukraine, as this would otherwise negate all that they had fought for.

On the other hand, Kiev knows that the clock is ticking at that the East is bunkering down and preparing for what seems to be an imminent battle, and may potentially seek to ‘pre-emptively’ attack in the coming months to best guarantee its chances of success. With such heightened mutual tension and the feeling on both sides that time is running out, the stage may be set for a disastrous continuation war in the coming months, one in which Kiev’s forces may have finally acquired the ‘X’ factor of Blackwater brutality that they’ve been seeking in order to help them win the war.

What Would Happen If McCain Armed Ukraine?

US Fracking Its Way to Ukraine