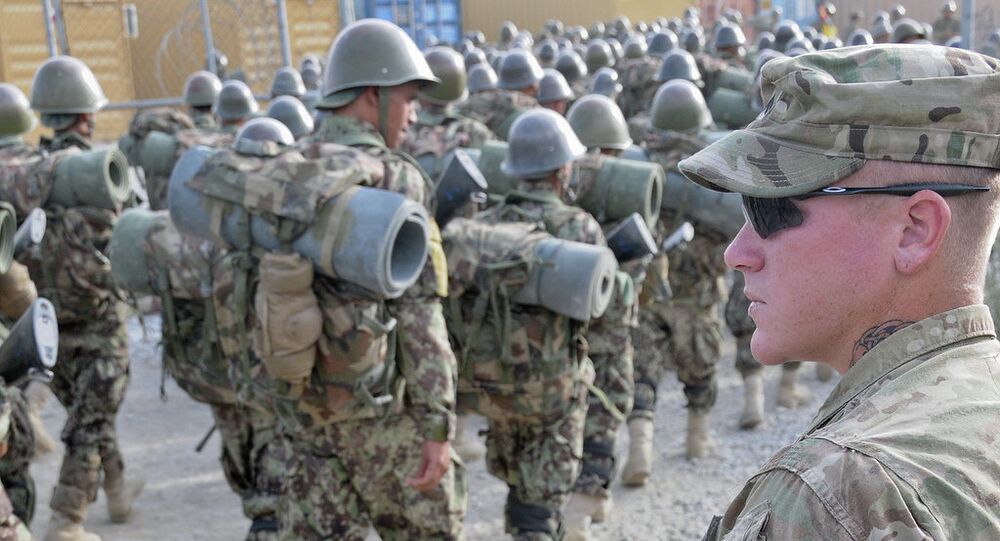 The US-led coalition has formally ended its military mission in Afghanistan. Although top NATO officials are expressing optimism regarding the results of the campaign, an Islamist insurgency is still on the rise in the region.

MOSCOW, December 29 (Sputnik), Ekaterina Blinova — The 13-year US military campaign in Afghanistan formally ended on Sunday, December 28; however, the longstanding military confrontation with the Taliban has not led to a victory over steadily-expanding Islamic extremism in the region.

According to the Congressional Research Service, the overall cost of the US mission in Afghanistan amounted to $686 billion of taxpayer money. During the military campaign, a total of 3,485 coalition servicemen were killed, including 2,356 American troops. For comparison's sake, the Soviet Union lost over 14,500 soldiers during the 1979-1989 war in Afghanistan.

Assessing the results of the campaign, NATO Secretary General Jens Stoltenberg claimed that "today Afghanistan is more stable and more prosperous than ever."

In his turn, Army General John Campbell, chief of the International Security Assistance Force, told an audience of military officials and diplomats during a Sunday gathering in Kabul that "over the course of a decade, our Afghan partners and we have built a highly capable Afghan army and police force of over 350,000 personnel."

"The road before us remains challenging, but we will triumph," he added.

© Flickr / The U.S. Army
NATO Leaves Afghanistan…Or Does It?
However, despite the optimism expressed by NATO top officials, the real picture seems far less rosy. According to UN figures, the death toll among peaceful civilians is on the rise: this year it totaled over 3,100, while in 2007 it amounted to 1,523. Experts estimate that by the end of 2014 the overall number of civilian deaths will reach 10,000.

The US State Department admitted in a report it released in April 2014 that despite all the efforts, violent extremism had been steadily spreading in Afghanistan over the past 13 years.

"Al-Qaeda's (AQ) global leadership continued to operate from its safe haven in the region and struggled to communicate effectively with affiliate groups outside of South Asia. AQ maintained ties with other terrorist organizations in the region, such as Tehrik-e Taliban Pakistan (TTP) and the Haqqani Network (HQN)," the report stated and added: "Afghanistan continued to experience aggressive and coordinated attacks by the Afghan Taliban, HQN, and other insurgent and terrorist groups."

It is worth mentioning that the number of Taliban insurgents increased substantially over the past 13 years – from 2,000 to almost 60,000. Targeting police authorities and civilians, Afghani extremists have recently intensified their brazen terrorist activity, which has resulted in the death of 5,000 police and military servicemen in Afghanistan in 2014 alone.

"I don't think it's possible to find peace in Afghanistan without actually sitting down with insurgents, with the Taliban, to negotiate a peace process. More than a decade of the US war in Afghanistan has been a complete failure, the US has deployed tens of thousands of troops and [they] still haven't been able to put down this insurgency," said Theo Sitther, of the Peacebuilding Policy Friends Committee on National Legislation, in an interview with RT.

© Flickr / chuck holton/ U.S. Army Photo
NATO’s ‘Resolute Support’ Mission in Afghanistan May Further Destabilize Country
The foreign policy specialist believes the US counterterror approach has proved completely inefficient, despite the fact that "too much blood and money has been poured in [it]."

"US counterterror policy seems to be stuck in a fruitless spiral of throwing good money after bad even as the number of violent extremist groups have spiked over the last decade," Theo Sitther wrote in his article "How US Counterterrorism Goes All Wrong," published in June, 2014.

Surprisingly, since the US and its NATO allies entered the region in the beginning of 2000s, opium production has risen sharply, and currently accounts for more than 90 percent of the global heroin supply, RT notes, citing Mr. Sitther. The expert stressed that "the Taliban actually uses drug trafficking to finance much of their insurgency." Thus far, it looks like US fighting against terrorism in Afghanistan has been lured into a vicious cycle, since Washington along with NATO authorities have turned a blind eye to opium production growth in the region.

As the situation in Afghanistan gradually deteriorates, the United States has postponed a full withdrawal from the state, announcing it will retain about 11,000 military personnel in the country in 2015.

The question remains open whether the US authorities will ultimately put an end to the flourishing Afghani heroin business anytime soon; and if Washington is willing to withdraw its military contingent from Central Asia and suspend the "endless war" on terrorism in the region.