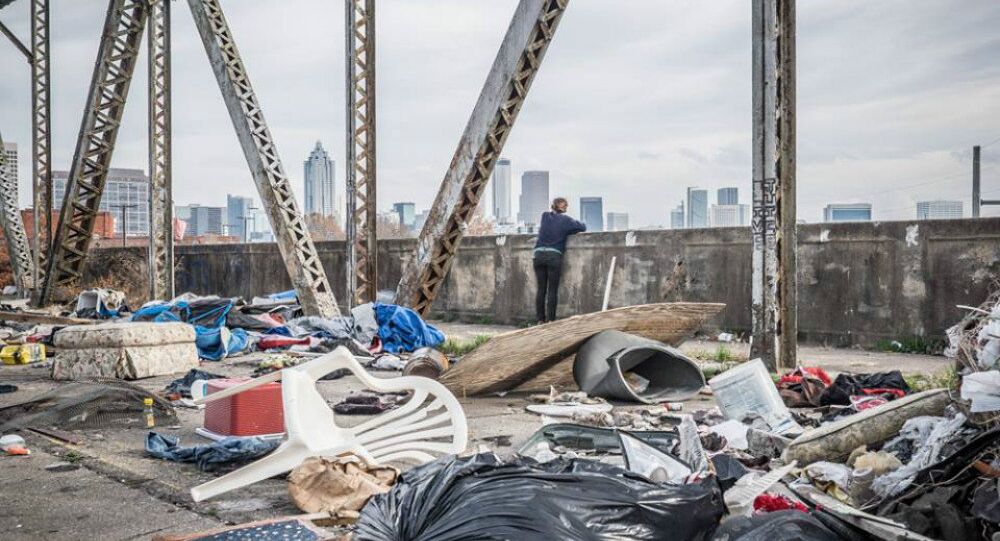 Sputnik talks to Brent Walker, who has been documenting the lives of the homeless, addicted and destitute on his doorstep in Georgia, USA. Brent uncovers their hopes, fears and the spirit that keeps them alive.

MOSCOW, December 24 (Sputnik) — Getting a sneak peak at someone else’s life can be a strong experience in itself, because there is always more to a person than his looks. We’ve seen examples of blogs such as The Sartorialist and The Humans of New York take over Facebook and quickly gain popularity among the vast majority of Internet mavens. But these are examples of hip people telling their hip stories. We love them, because we find it easy to relate to. But there are other stories out there that go by unnoticed. Stories of hopelessness, that most of us would never stop to listen to, let alone offer help to those telling them.

Luckily, however, there is one person, who stands out from the rest of the crowd. Photographer Brent Walker, of Newnan, Georgia has chosen to commit to “documenting conversations with the unseen” – as he puts it himself. His project The Hidden South tells the stories of people who are just like us, but who have, for one reason or another, suffered unforeseen troubles in life. Brent Walker has no prejudice against those struggling with poverty or addictions; because he knows that they are no worse than the rest of us, just very broken.

Sputnik got a chance to talk to Brent Walker about his project and about what he sees as the main flaws of humanity – not poverty, but ignorance and indifference.

When did you start this project and what made you start it in the first place?

Brent Walker: The project officially launched on September 10th, 2014. The primary reason that I started is because I think it's important to hear what people have been through, to better understand their current situation and how to help. There are people and political groups that would have you believe that all addicts are the same or all people who live in a certain neighborhood are the same. My job is to help people realize that everyone is an individual and has their own story to tell.

Can it be overwhelming sometimes to speak to people that are desperate? You really try to lend a helping hand to those in need. Do you find yourself deeply affected by their woes?

Brent Walker: It can be overwhelming at times. Usually, when I'm interviewing and photographing people, I stay focused on getting their story. It's when I start to write their story that it can be hard. The story that I did yesterday about Tory is a good example. I think because I'm a former addict, the stories of the hopelessness caused by addiction weigh heaviest on me. While my situation was different than hers, I understand exactly how she feels. After I finished listening to the recording and writing her story, I felt emotionally drained but it was a really important story to tell.

How do you think The Hidden South project can help change the situation?

Brent Walker: If you take the time to listen to other people's stories and see their faces, they become human. It becomes more difficult to choke the life out of someone, for selling cigarettes on the street. It becomes more difficult to drop bombs on thousands, when they have a face and a name and a story. It makes people think twice before they vote to take away social programs when they feel connected to people it will affect.

It becomes more difficult to drop bombs on thousands, when they have a face and a name and a story.

This project can make a difference in creating a more compassionate world. It already has in small ways. The more people that it touches, the more good it will do. I'm just getting started but I'm really excited about the change that this project can make.

Do you think that there is – in any way – a racial issue in society at the moment, or do you find that any person regardless of the color of their skin can become lost and troubled?

Brent Walker: Yes, absolutely. It's more hidden now but I still see it often. For example, I recently purchased a car. As I'm signing the papers, the white salesman tells me, "Don't get your car serviced in Union City. It's a little dark down there, if you know what I mean." That may seem minor but I still hear comments like that often. It's still there, right underneath the surface. It's not just the South. I think that what we're seeing with the police killings in Ferguson and NY illustrates just how far we have to go.

I think that what we're seeing with the police killings in Ferguson and NY illustrates just how far we have to go.

Beyond racial issues, I think there is a war against the poor in this country. We now have laws on the books, in communities all over the nation that make it illegal to feed the poor. We are putting spikes outside of buildings to keep the homeless from sitting down. We make it illegal for people to sleep outdoors but give them no alternative. We call ourselves the greatest country in the world, a "Christian nation", but we don't take care of the people within our borders who need help the most. It all boils down to greed and this feeling that somehow, there isn't enough to go around, which is a lie. We give many billions of dollars in subsidies to oil companies every year. Corporate welfare is an accepted part of our system… Our priorities are just twisted right now and I think it's shameful.

It all boils down to greed and this feeling that somehow, there isn't enough to go around, which is a lie.

You can contribute to the project here

100% of all donations will be used to help people that Brent meets, who could use a hand.

Hundreds of Santa Clauses to Run Through Moscow in Charity Race