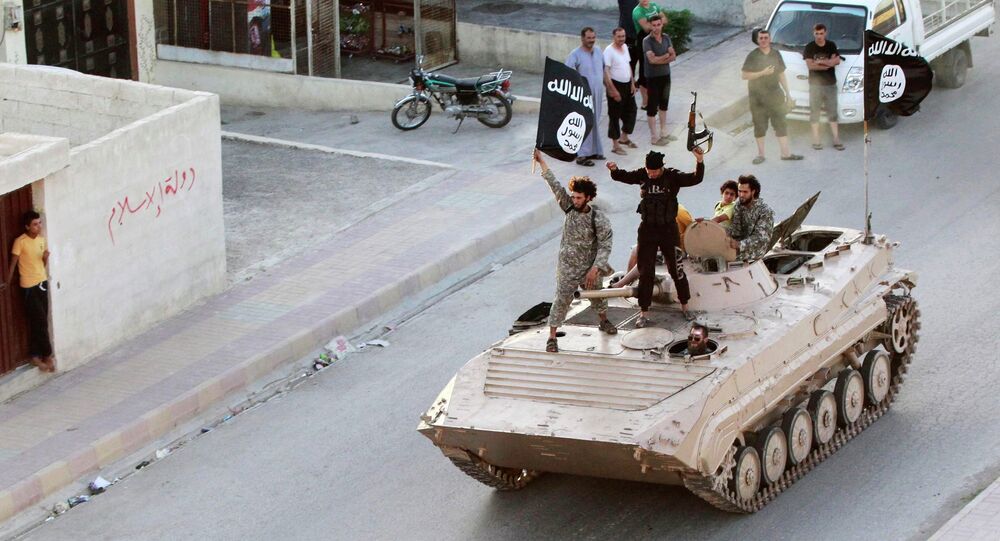 German publicist Jürgen Todenhöfer, 74, who was allowed into the territory held by the Islamic State by its jihadists, said he was "strongly impressed" by the military might and ambitious plans of the militants. The Islamic State is much more dangerous than the West realizes, he said.

MOSCOW, December 22 (Sputnik), Ekaterina Blinova — German publicist Jürgen Todenhöfer has become the first Western journalist to be allowed to visit Islamic State-controlled territory in Syria and Iraq; he has revealed that the organization is "much stronger and much more dangerous" than anyone in the West can imagine.

© AP Photo / Militant Website, File
Islamic State Executes 100 Fighters Who Wanted to Flee Raqqa: Report
"Jürgen Todenhöfer, 74, is a renowned German journalist and publicist who travelled through Turkey to Mosul, the largest city occupied by Islamic State, after months of negotiations with the group's leaders," the Independent reported.

In an interview with the website Tz.de, the journalist admitted that he was shocked by the military strength of the Islamic State and the "almost ecstatic enthusiasm" of jihadi fighters, that "[he has] never encountered in any other warzone." Insurgents there are armed with modern weaponry, including German Heckler & Koch MG3 machine guns. "Someday this German MG could be directed at us," warns the publicist.

According to Mr. Todenhöfer, the Islamic State has already maintained control over a territory that exceeds the dimensions of the UK. The Islamist organization "has worked hard" to create a "functioning state" with "social welfare," and "a school system" and plans to provide education to girls, Jürgen Todenhöfer told the TV program RTL Nachtjournal, as cited by the Independent.

"These are not stupid people. One of the people we met had just finished his law degree, he had great job offers, but he turned them down to go and fight… We met fighters from Europe and the United States. One of them was from New Jersey. Can you imagine a man from New Jersey traveling to fight for the Islamic State?" the journalist said in an interview with CNN.

Jurgen Todenhöfer, the German journo who returned from #IS last week, is publishing summary of his trip on Monday. pic.twitter.com/I3h9CNa8Om

The Islamic State fighters believe that "all religions who agree with democracy have to die," the publicist underscored, adding that jihadists are planning to conquer the world and exterminate all religious groups which oppose the Islamic State's  interpretation of the Koran. However, terrorists claim that they will allow Jews and Christians – "the people of the book" – to exercise their beliefs.

"This is the largest religious cleansing strategy that has ever been planned in human history," the journalist stressed.

More photos of Jurgen Todenhofer, journalist from #Germany who just returned from visiting lands controlled by #IS pic.twitter.com/oa1ZmWgQpW

According to Jürgen Todenhöfer, these terrorists cannot be defeated by Western airstrikes or a military intervention: they are widely spread over the territory they control, and enjoy the support of the locals. "With every bomb that is dropped [by the US-led coalition] and hits a civilian, the number of terrorists increases," he said.

"Each day, hundreds of willing fighters arrive from all over the world," warns the publicist. He believes that the only ones that can counter the Islamic State's advance are moderate Sunni Muslims.

"The only ones who could stop this now are the moderate Iraqi Sunnis. If you want to defeat an opponent, you must know him," Jürgen Todenhöfer said.

During his trip, the journalist interviewed militants who claimed to have beheaded prisoners and enslaved women. Todenhoefer also visited a local "recruitment house," where he witnessed some 50 potential recruits showing up every day.

"I am 13," one child reportedly said, answering Todenhoefer's question through an interpreter.

© Sputnik / Andrey Stenin
IS Beheaded 150 Women for Not Marrying Fighters
"We met fighters from Europe and the United States. One of them was from New Jersey. Can you imagine a man from New Jersey traveling to fight for the Islamic State?" the journalist added.

Todenhoefer was allowed to meet with prisoners and speak with an IS spokesman about the murder of Western journalists, including James Foley, beheaded in August. "He [Foley] got killed because of the ignorance of his government that did not give him any help," the spokesman was quoted as telling Todenhoefer.

Jurgen Todenhoefer is the first Western journalist to reach the Syrian cities of Al-Raqqah and Deir Ezzor, as well as the Iraqi city of Mosul, captured by IS in June. According to earlier reports by Al Arabia, the 74-year-old author negotiated his trip with militants over the Internet.

The IS, a Sunni jihadist group, has seized vast areas across Syria and Iraq, proclaiming a caliphate in June on territories under its control. A US-led international coalition has been conducting airstrikes on IS targets since August in Iraq and since September in Syria. IS has consistently taken Westerners hostage, many of whom have been executed on camera in 2014.

Last week, the UN Under-Secretary-General for Humanitarian Affairs told the Security Council that up to 350 children as young as five years old were being trained by the IS in Raqqah, Syria.