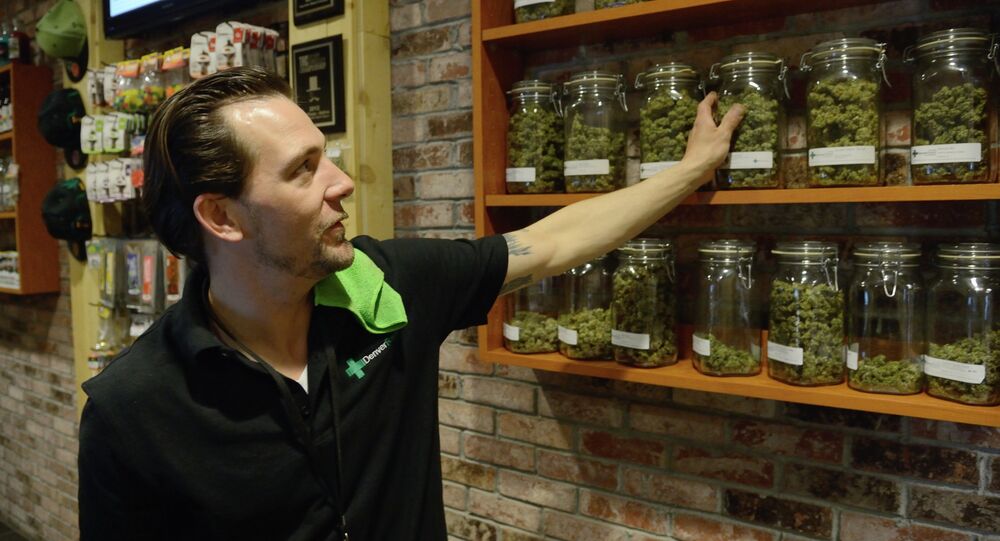 The legal sale of weed is a new thriving business in several American states; however, the commercial potential of the industry is currently impaired by outdated federal legislation.

MOSCOW, December 19 (Sputnik) — The recent lawsuit of Nebraska and Oklahoma versus Colorado over concerns of the latter’s legal cannabis production spreading far outside its state boundaries has sparked an acute discussion over the commercial prospects of the $2.3 bln US legal cannabis industry.

By Legalizing Marijuana, Is US in Violation of Its Own Anti-Drug Treaties?
As the row over marijuana between three heartland states escalates, having reached the US Supreme Court yesterday, America is becoming increasingly excited over the commercial prospects of weed.  Starting with California’s 1996 initiative, a legal or semi-legal status of marijuana is now acknowledged in 23 states, mainly in the Democrat-leaning West Coast, New England and, occasionally, Midwest. There are, however, only four states with weed absolutely decriminalized and legal for both medical and recreational purposes, namely, Colorado, Oregon, Washington and, strangely, conservative Alaska, according to the State Marijuana Laws database.

Now, the concerns of Colorado’s neighboring states are reasonable. The legalization of marijuana for recreational purposes, allowed in the Centennial State since January 1, 2014, has already created a booming industry, attracting an ever-growing pool of customers, creating jobs and offering high profits. If this industry is to grow it must expand outside of Colorado, as it needs more markets in accordance with the laws of capitalism. Colorado cannabis market is estimated to have created over $600 mln in total revenues this year, as reported by Entrepreneur. Selling weed statewide also brings fiscal benefits, with cannabis dispensaries in Colorado having paid $67 mln in taxes this year.

Nebraska and Oklahoma will hardly succeed in containing the triumphalist march of weed legalization across the USA, as their judicial initiative contradicts the spirit of the market economy, which is America’s cornerstone value. Market observers, namely ArcView Market Research, say the legal weed industry, having reached $2.3 bln in total earnings this year, will expand to $10.2 bln by 2018.

© Sputnik /
Oregon, Alaska, DC Legalize Recreational Marijuana
A nationwide poll administered in 2013 revealed that 7.3% of Americans age 12 and older were frequent users of marijuana for recreational purposes the previous year, an increase of 7%, year-on-year. As the market for legal weed-related businesses is growing, many states may consider legalizing cannabis out of fiscal considerations. However, federal authorities still consider marijuana an illicit narcotic crop, causing tensions similar to those prevalent in the heartland between CO, NE and OK.

The legal production and distribution of cannabis in different states is also very appealing to investors. In New York, the legislation provides that licensed businesses must grow, harvest, process and sell their product within the ‘seed to sell’ principle, meaning they have to employ a lot of personnel, buy or rent greenhouse premises, invest in fertilizers, spend on utilities, etc. Such a full-circle business requires substantial investment, and as long as commercial returns are good, a sufficient investment is usually in place. However, financial institutions and credit cards are subject to federal regulations, and the federal government prohibits weed. This is where private incentive steps forward.

Uruguay Unable to Effectively Implement Marijuana Legalizing Law
“We don’t love the way the New York policy works, but over time the legislation can change,” Derek Peterson, ex-senior vice president for Morgan Stanley, and now a founder of private investment firm Terra Tech, told the New York Times. “Even if you can’t make a significant profit now, you can invest in it for the future.”

Another company, involved in the production and sale of the substance, California-based MedMen, is one of the most successful examples in the nationwide industry. This November, MedMen announced they raised $3.75 mln from investors in an unofficial IPO of sorts, as reported by Fortune. Some of their investors hail from as far as Florida, where weed is prohibited and not even decriminalized. But the people there are interested in securing a stake in the future sky-high dividends the growing industry promises.

“Institutional capital has been circling for a year now, but they’ve just been circling,” Adam Bierman, cofounder for MedMen said. Big investors are still avoiding companies that “touch the plant,” as major investors still see it as a taboo narcotics business. Similar trends are seen north of the border, in Canada, where a Moncton, NB-based medical weed company, OrganiGram, raised $40 mln of initial investment in an IPO on the TSX Venture Exchange stock index. OrganiGram’s shares quickly tripled in value, to $120 mln this past August.

The US federal government should probably consider at least decriminalizing cannabis so legitimate companies south of the Canadian border can legally participate in financial markets.

© Flickr / Bob Doran
Third of Asylum Seekers Regularly Use Marijuana on Manus Island: Detainee
As for taxation, the benefits for the IRS's coffers are obvious, compared to the non-taxable black market. However, weed tax revenues turned out to be not as high as previously estimated. The total tax imposed on the sale of legal weed in Colorado is 27.9%, including a 2.9% sales tax, a 10% special weed sales tax and a 15% excise tax. Proposed in Congress back in 2013 the Marijuana Tax Equity Act (HR 501) could end the federal ban on weed and impose a 50% tax on legitimate businesses. However, the project has gotten little traction. Now, Colorado state expected to collect $33.5 mln in weed taxes in the first half of 2014, but $21.5 mln went missing, meaning illegal weed pushers gained a competitive edge in prices over the legal sellers, subject to taxes.

All in all, the main issue vis-à-vis the legal production and sale of weed in the US is the conflict between federal legislation, which sees weed as an illegal controlled narcotic substance, and the laws of several individual states that consider cannabis a marketable goods. There is no doubt capitalism will prevail; sooner or later Washington will decriminalize the weed business, but as time passes by, a lot of money is lost due to formal restrictions.