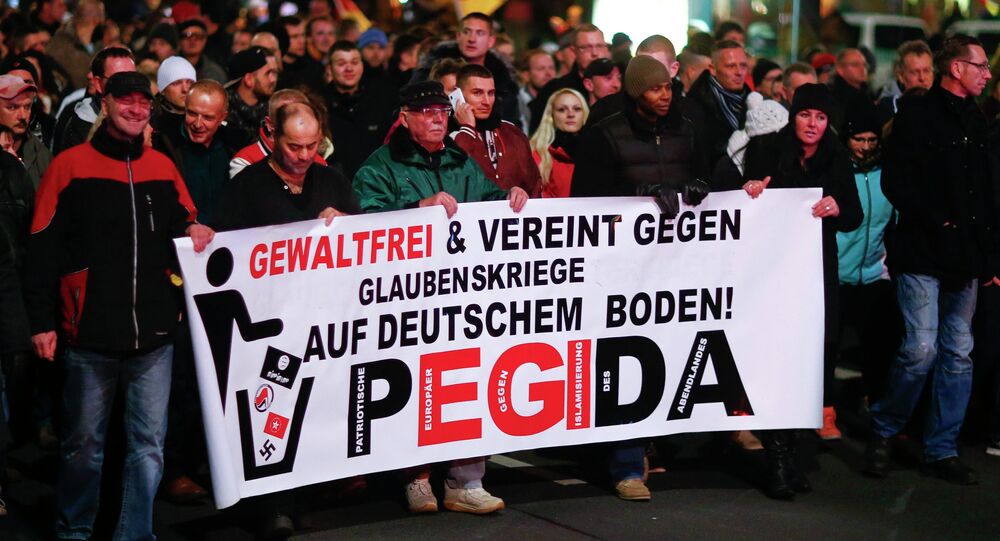 Protests against radical Islam and the alleged Islamification of Germany have gained traction in the country, capitalizing on Germany’s growing concern over immigration. The rise of the far-right movement has caused a public and political backlash.

MOSCOW, December 19 (Sputnik) – In recent months, thousands of Germans took to the streets of several cities across the country in protest against Islamic extremism and alleged Islamification, sparking an intense debate in German society.

© REUTERS / Michael Dalder
Merkel Slams Far-Right Rhetoric Amid Growing Social Tension in Germany
The protests are spearheaded by a group known as the Patriotic Europeans against the Islamification of the West (PEGIDA). They were first staged in October, with several hundred people attending. On Monday, approximately 15,000 people took to the streets of Dresden demanding that the government introduce tougher immigration laws, according to Deutsche Welle. PEGIDA’s leader Lutz Bachmann, 41, lives in this city.

The movement’s next meeting is scheduled for December 22. Everyone interested is allegedly invited to celebrate Christmas together, according to a statement on PEGIDA’s official Facebook page, which has already garnered over 72,000 likes. The movement has a strong presence on social media, using hashtags like #pegida to rally support for its cause.

The anti-Islamic/anti-immigration movement is gaining momentum, with other far-right groups, including the Hooligans Against Salafists (HoGeSa), also organizing marches in several cities across Germany. However, many of those participating are far from being extremists. "I'm a pensioner. I only get a small pension but I have to pay for all these people (asylum seekers). No-one asked me!" a concerned elderly German said, as quoted by BBC. "I am not right wing, I'm not a Nazi. I am just worried for my country, for my granddaughter," another participant of the Dresden march told the media outlet.

© REUTERS / Hannibal Hanschke
Germans to Stand Against Country’s ‘Islamization’ During Monday Marches
People rally under the banners saying "Protect our homeland", "Stop the Islamisation", "No sharia law in Europe!" and "We are the people". The last slogan was initially used a quarter century ago in the German Democratic Republic right before the fall of the Berlin Wall. Protests are fueled by concern that Merkel’s government "is not doing enough to address concerns about immigration and asylum seekers," The Guardian reported, citing a recent poll, conducted for the Spiegel magazine. 34 percent of Germans, who took part in the survey, think that the country is undergoing the process of Islamisation.

German authorities have strongly criticized the anti-Islamic movement. "There's freedom of assembly in Germany, but there's no place for incitement and lies about people who come to us from other countries,'' Chancellor Angela Merkel warned, as quoted by the Time magazine. "Everyone [who attends] needs to be careful that they are not taken advantage of by the people who organise such events." Ralf Jäger, the interior minister in the state of North Rhine Westphalia, called PEGIDA members "neo-Nazis in pinstripes", according to Deutsche Welle.

The anti-Islamic movement has sparked backlash on social media with hashtags like #nopegida. Frank-Walter Steinmeier, Germany’s foreign minister, took to Twitter to stress that Germany is an open-minded and modern society, which will not be overrun by "a couple of ranters on marketplaces".

#Steinmeier: GER is a rich country precisely because we are open-minded+globally connected. We benefit economically, culturally+socially 2/3

FM #Steinmeier: We are an open-minded, modern society + we will not have this ruined by a couple of ranters on marketplaces. 3/3 #nopegida

Nopegida hashtag has also been used to organize anti-Nazi rallies in places, where anti-Islamic protests were supposed to take place. In several instances people managed to thwart anti-Islamic rallies.

"Good night! Please ensure that your apartment is not overrun by Muslims overnight," another Twitter user, who is against PEGIDA, ironically observed.

Thank you @semperoper in Dresden… banner says: for a society open to the world in support of #NoPegida pic.twitter.com/gjsRfKZGBy

Social media users in Germany also used #illridewithyou hashtag, which was introduced in Australia after a gunman had taken several people hostage at the Lindt café in Sydney. For a while the hashtag was trending in Germany. One Twitter user observed that anti-immigration marches in the country are a "national tragedy".

hope we see something like #illridewithyou as an answer to #Pegida in Germany soon.

Anti-foreigner marches in #Germany are a national tragedy. #illridewithyou The good people must speak out against haters

Immigration has become a burning issue in Germany, the country with the largest number of asylum seekers in the EU. As many as 200,000 are expected to ask for asylum in 2014, which is a significant increase from the last year. In 2013, Germany received 127,000 asylum claims, according to BBC.

Islamic State Planning to Send Terrorists to Europe in Guise of Refugees: Reports