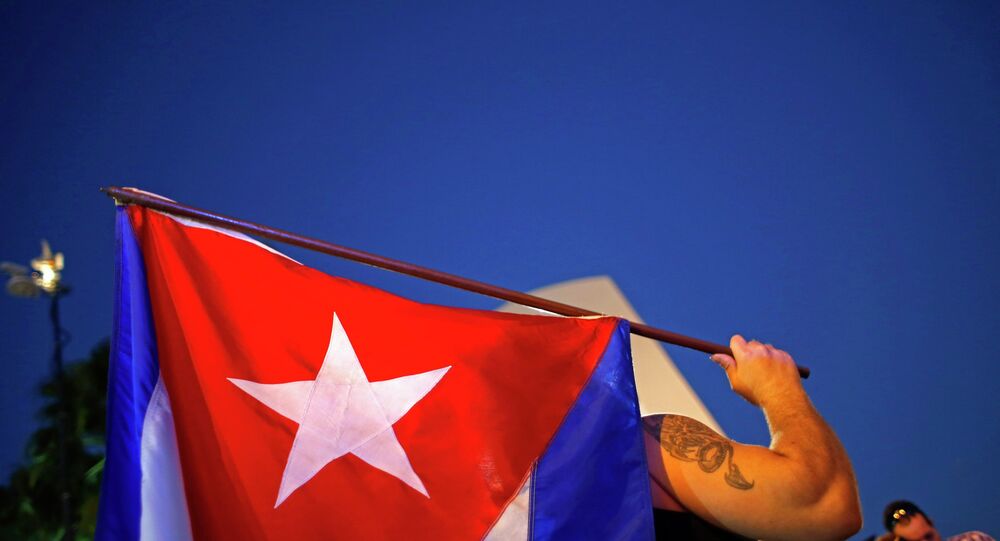 Florida, home to the 1.5 million majority of Cuban Americans living in the United States, represents a significant number of voters in the traditionally battleground state.

© Sputnik / Igor Mikhalev
Congress Republicans Could Chill US-Cuba Thaw: Scholars
MOSCOW, December 19 (Sputnik), Svetlana Alexandrova — The improvement in relations between the United States and Cuba might be a deal breaker in the Florida vote in the 2016 presidential elections, as the importance of Cuban-American voters cannot not be overestimated.

Florida, home to the 1.5 million majority of Cuban Americans living in the United States, represents a significant number of voters in the traditionally battleground state.

Barack Obama has won Florida twice and his recent announcement on Cuba was welcomed by younger Cuban-Americans, who have been in opposition to elder Cuban-Americans, Victor Blumer-Thomas, a senior professor at the Institute of the Americas in the University College in London told Sputnik. He explained that Cuban-Americans who were born in the United States have no memory of Fidel Castro’s regime and are likely to identify themselves first as Americans and then as Democrats.

“Jeb Bush has to be careful in his statements but you will note his reaction was quite mild,” Blumer-Thomas told Sputnik, adding that "the impact of the White House's new plans on how Florida votes depends on many things, including how the negotiations go.”

Another consideration for the Democrats is that Florida's Cuban exiles have been traditionally voiced support for the Republicans. The political allegiances were predetermined by Cold War politics, as a large number of Cubans opposing Fidel Castro’s regime left for the United States following the Cuban Revolution.

But for Republicans, "Cuba will diminish sharply in electoral importance," said Peter Hakim, president emeritus at the Inter-American Dialogue, a policy analysis center based in Washington, D.C.

© REUTERS / Carlos Barria
Academics Doubt Possibility of Rapid US Policy Change for Cuba
Victor Blumer-Thomas, a senior professor at the Institute of the Americas in the University College in London says that Cuba is “less and less important in how Florida votes.”

"Even in Miami-Dade County, where the Cuban-Americans are concentrated, Obama won a majority,” Blumer-Thomas said.

On Thursday, US President Barack Obama instructed Secretary of State John Kerry to begin discussions with Cuba on re-establishing diplomatic relations, including re-opening the US Embassy in Havana, easing travel to Cuba, allowing to the opening of accounts at Cuban financial institutions to help process authorized transactions, increasing Cubans' access to communications and, possibly, lifting the decades-old economic embargo.

However, Obama does not hold the authority to fully lift the economic sanctions against Cuba, that decision must be approved by the US Congress.