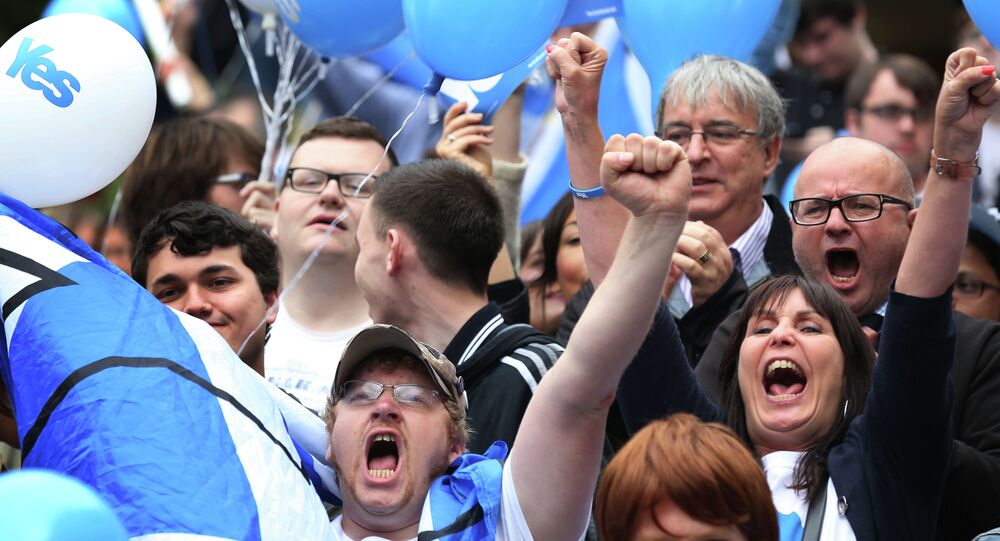 Wednesday, media reports revealed details of a plan by senior Palace officials and the United Kingdom's most senior civil servant, Sir Jeremy Heywood, to have the Queen make a crucial intervention into the Scottish independence campaign just four days before voters went to the polls.

"I would imagine that most Scots who were voting 'Yes' would be pretty angry about the fact that the Monarch was attempt to persuade Scotland to vote No," Smith, whose organization campaigns for a democratically elected head of state, said.

© Fotobank.ru/Getty Images / Simon Dawson
New Powers for Scotland ‘Fall Short’ of Pre-Referendum Promises
Wednesday reports in The Guardian newspaper revealed details of a plan by senior Palace officials and the United Kingdom's most senior civil servant, Sir Jeremy Heywood, to have the Queen make a crucial intervention into the Scottish independence campaign just four days before voters went to the polls.

As the Queen entered a church, a "well-wisher" reportedly said to the Monarch "We won't ask you about the referendum," to which the Queen replied, "Well, I hope people will think very carefully about the future."

The remarks were widely seen as an endorsement for the anti-Scottish independence campaign. However, The Guardian has now published details showing that the entire episode was concocted by senior British establishment officials, who feared a surge in support for independence and wanted the Monarch to break from convention and endorse a 'No' vote.

© Flickr / Màrtainn MacDhòmhnaill
Scotland Will Hold Second Independence Referendum: National Party Leader
"It was obvious to us at the time that the comments by the Queen were quite a deliberate intervention," Smith told Sputnik. "We think there should have been an inquiry into her interference into a democratic process. Whether she was persuaded to make this intervention or not is neither here nor there. She is not allowed to intervene in the democratic process, and it is quite obvious that the only reason she did intervene was an attempt to bolster one side over the other."

Meanwhile, Thomas Mace Archer-Mills, who is Chairman of the British Monarchist Society, told Sputnik he was pleased the Queen had spoken out.

"I'm glad that something was said. We know where the Queen stands, we know what her leanings are, and she is Queen of a United Kingdom," Archer-Mills said.

Archer-Mills went on to accuse The Guardian newspaper of "fabricating a conspiracy" and accused Scottish National Party (SNP) Leader and Scottish First Minister Nicola Sturgeon of "creating waves of republicanism."

"[The Guardian] are fabricating a conspiracy. They are claiming that there were people behind the scenes working to make sure the Queen's views were known. Well, the Queen's views about the Union and a United Kingdom have always been known," Archer-Mills told Sputnik.

"We already know that if Scotland goes ahead and achieves independence, which it seems they are determined to do, we know now that the first minister [Nicola Sturgeon] is very republican in her leanings," Archer-Mills added.

"I don't believe for one moment that if Scotland went ahead and gained independence that they would retain Her Majesty. Nicola Sturgeon is already creating her waves of republican sentiment and stirring it all up. I think it is upsetting and sad," Archer-Mills noted.

© Flickr / Cardinal Canary
Scottish National Party May Double Its Share at 2015 UK General Election
The SNP's official policy is to retain the Queen as head of state in an independent Scotland, with SNP spokeswoman Lynne Currie telling Sputnik that "[Nicola Sturgeon] has restated her on-the-record support for the Monarch and described the monarchy as "a model that has many merits.""

On this, Graham Smith from the campaign group Republic said that the SNP's policy was a tactic, rather than an ideological commitment.

"The SNP's position on retaining the Monarch after independence is a tactical thing for them. I understand the tactic, but I think [The Guardian revelations] may well harden attitudes in Scotland regarding the Monarchy," Smith said in his conversation with Sputnik.

Archer-Mills agreed with his counterpart on this, telling Sputnik there were more "pressing things" that needed to be addressed.

"The SNP position on retaining the monarchy is a tactic and I do not believe it at all. I think there are more pressing things that need to be addressed rather than tackling a happy, older lady who is a grandmother to us all. I don't understand that," Archer-Mills said.

On September 18, 2014 Scotland held a referendum to secede from the United Kingdom and establish itself an independent state. The political idea, however, was rejected by over 55 percent of Scots, with Scotland continuing to remain a part of the United Kingdom.