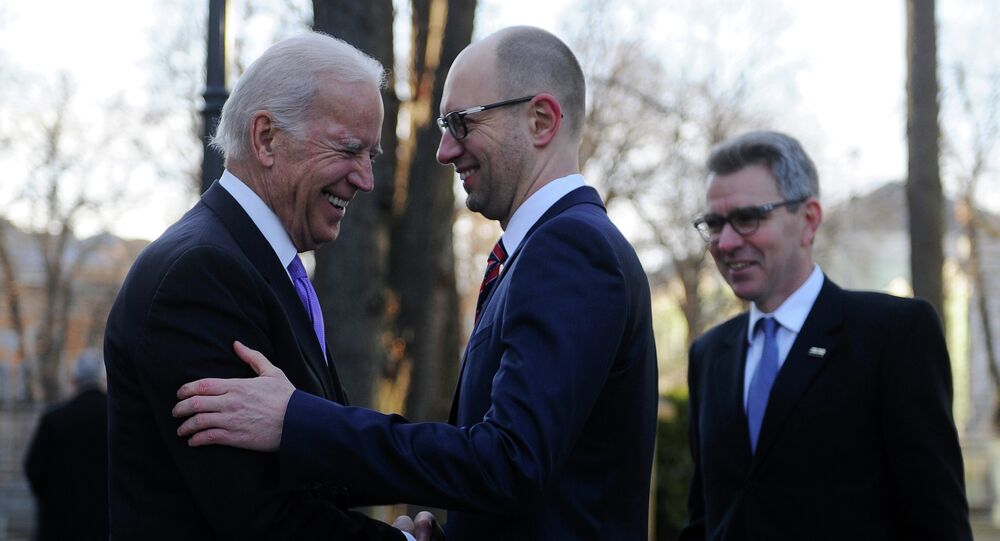 The so-called Ukraine Freedom Support Act authorizing $350 million in military aid to Ukraine will create another Afghanistan in the center of Europe.

MOSCOW, December 17 (Sputnik) – In its relations with Russia, the Obama administration seems to have adopted “good cop – bad cop” tactics. Days after the US Senate passed the so-called Ukraine Freedom Support Act, authorizing $350 million in military aid to Ukraine, state secretary John Kerry came out with the most peaceful and reassuring statements since the start of the year 2014. In Kerry’s words, “the sole purpose of the anti-Russian sanctions was to restore international norms” and these sanctions could be "lifted depending on the choices that president Putin makes."

Almost in the same hour, the White House’s spokesman Josh Ernst said Obama would be ready to sign the resolution on Ukraine into law "before the end of the week." The only logic that can be seen here is the logic of pressure.

"The American side obviously expects Putin to be more pliable in a situation when ruble is under such pressure; they think that they won now," Yevgeny Minchenko, the head of the Moscow-based International Institute for Political Expertise, said. This kind of attitude may explain the self-assured tone of the State Department’s spokeswoman, Jen Psaki.

"Russia has a choice. There are specific steps they can make to implement the Minsk protocols… That's in their power, and if they do that, obviously that will have an impact on the actions we take," Psaki told reporters in Washington.

There are, however, two problems with this “good cop-bad cop” strategy of pressure. First, it is still not clear WHAT Russia has to do in Ukraine for the sanctions to be lifted. Second, the belligerent Ukraine Freedom Support Act, if implemented, will certainly endanger the Minsk agreements even more by pushing Ukraine towards a military solution and also unlawfully limits Russia’s foreign trade.

The Act includes clauses on providing Ukraine “anti-tank and anti-armor weapons, crew weapons and ammunition; counter-artillery radars, tactical troop-operated surveillance drones.” This is not the full list of items to be purchased for the earmarked $350 million in war aid, but it is certainly enough to make Ukraine a second Afghanistan in the middle of Europe. The Act also authorizes the president to use sanctions not only against Russia’s defense industries, but also against “companies worldwide that make significant investments in particular unconventional Russian crude oil energy projects.” (Since it is not specified what an “unconventional crude oil project” is, sanctions can indeed be applied against ANY oil company that cooperates with Russia.) And, to top it all, the US president is authorized to sanction Gazprom, if it “withholds significant natural gas supplies from member countries of NATO or further withholds such supplies from countries such as Ukraine, Georgia, or Moldova.” Who is going to decide what the word “to withhold” means here? If some company DOES NOT sell its product to some other company in another country, is it a punishable activity? If we believe the US Congress, yes.

All of these (indeed, illegal and absurd) sanctions may be lifted, however, if, as the Act says, if Russia is proclaimed by Mr. Obama to have “ceased directing, supporting, or financing significant acts intended to undermine the peace, sovereignty, or territorial integrity of Ukraine, Georgia, and Moldova, including through an agreement between the appropriate parties”.

This is certainly not a legal language, but a language of propaganda (“undermine the peace”). In translation to a simpler popular terms, the US congressmen want Russia to give up on more than 3 million people in Eastern Ukraine, who don’t want to have anything in common with the new regime in Kiev (which obviously has killed the majority of the more than 4 thousand casualties of the civil war in Ukraine); the US congressmen also want Russia to deliver to Georgia several hundreds of thousands of Abkhazians and South Ossetians (who defended their sovereignty in three wars) plus the restive region of Transdniester in Moldova.

How can this be feasible?

Ok, the US Congress is prone to populist acts, but may be the executive branch in the US or the EU is a bit wiser? Let’s return to the first question: what are Mrs. Psaki’s “specific steps” that Russia can do in order to have the sanctions lifted and to what end can these specific steps lead? So far, the only more or less definitive stance on that matter was taken by Germany’s chancellor Angela Merkel. She said that sanctions would be lifted if the east of Ukraine “holds free elections under OSCE supervision, with a consent from the government in Kiev.”

Well, this is not feasible independent of Russia’s wishes or actions, since the people in the east of Ukraine don’t want their lives to be controlled by the newly established Ukrainian nationalists from OTHER regions of Ukraine in Kiev. People in the east of Ukraine have already lost thousands of lives in a civil war forced on them by exactly that very government in Kiev, whose consent Mrs. Merkel wants for the new elections in the rebellious Donetsk and Luhansk regions – places this government helped to destroy.

The result is a stalemate. Unfortunately, the anti-Russian lobbyists of the Ukraine Freedom Support Act, headed by Robert Menendez, do not meet much opposition at home (only five congressmen voted against the bill). Throughout his career (Libya, Syria, now the “return” of the American operations in Iraq), Obama has shown himself to be irresponsible enough to sign that bill. It won’t lead to peace Ukraine. It will create another Afghanistan in the center of Europe: let’s not forget that the rise of Osama bin Laden in Afghanistan originated from CIA involvement in the country.

US Senate to Push for Lethal Aid to Ukraine if Obama Won’t: Senator