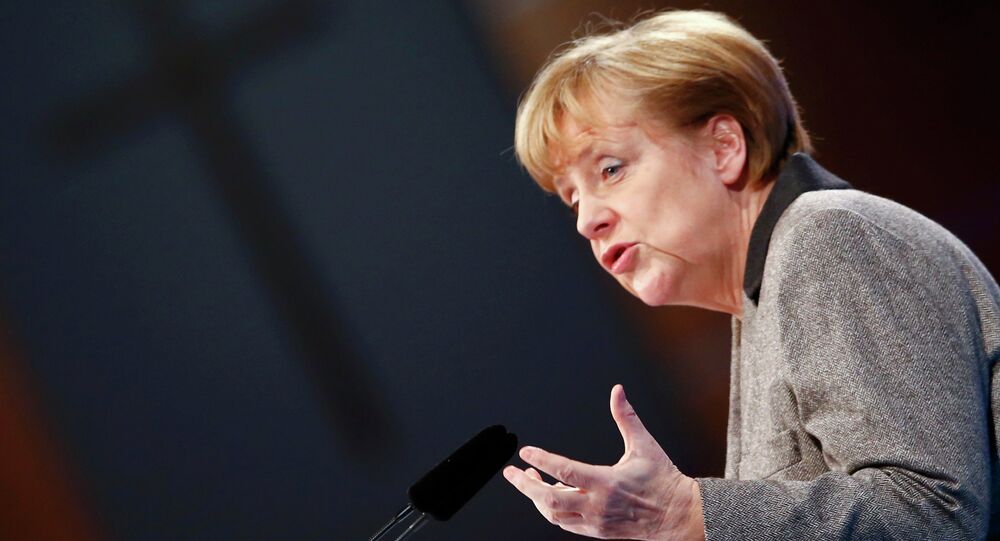 Chancellor Angela Merkel has warned the people of Germany that far-right rhetoric is unacceptable, amid growing social tensions triggered by the increasing radicalization of the country's Muslim diaspora and a sharp rise in the influx of refugees from Iraq, Syria, and Afghanistan.

MOSCOW, December 16 (Sputnik), Ekaterina Blinova — German Chancellor Angela Merkel has blasted participants of the Patriotic Europeans Against the Islamization of the West march in Dresden for their "far-right rhetoric" amid growing social tension inside the country.

© REUTERS / Hannibal Hanschke
Germans to Stand Against Country’s ‘Islamization’ During Monday Marches
"There's freedom of assembly in Germany, but there's no place for incitement and lies about people who come to us from other countries. Everyone (who attends) needs to be careful that they're not taken advantage of by the people who organize such events," said Angela Merkel, as quoted by the Associated Press.

According to the media outlet, the group, which is called Patriotic Europeans Against the Islamization of the West (Pegida), has been carrying out weekly marches in the city of Dresden, attracting a growing number of supporters. Last week about 10,000 marched against "asylum cheats" and the "Islamization" of Germany.

"We don't want a flood of asylum seekers, we don’t want Islamization. We want to keep our country with our values. Is that so terrible? Does that make us Nazis? Is it a crime to be a patriot?" one of the protesters claimed.

Remarkably, a survey conducted by Zeit Online indicated that 49 percent of Germans supported Pegida's concerns, and another 30 percent "fully backed" the aims of protesters.

It should be noted that a sharp rise in asylum seekers from Syria, Iraq and Afghanistan, as well as Balkan and African countries has aggravated the country's longstanding social tensions. More than 150,000 people have applied for refugee status in Germany during the first 11 months of 2014, exceeding 2013's figures by 40,000.

© REUTERS / Hannibal Hanschke
‘Anti-Islamization’ Protests Sweep German City of Dresden: Reports
Although Mrs. Merkel declared this year that multiculturalism has "utterly failed," she has not yet formulated a new strategy to deal with the multi-cultural problems of German society. Furthermore, it seems that the German authorities are rapidly losing control of the situation.

Radio Free Europe/Radio Liberty reported on December 8 that the German leadership is deeply concerned about the radicalization of the Muslim diaspora in the country. More than 500  German nationals are believed to be fighting with the Islamic State terrorists in Iraq and Syria and the number of new recruits is growing steadily. The media outlet stressed that a vast number of German Chechens are joining ISIS, and that some of them have already become "idol[s] for the Islamist scene in Germany."

On the other hand, the Chancellor has evidently put herself in an embarrassing situation: while lecturing the German population about the inadmissibility of far-right rhetoric, Mrs. Merkel is turning a blind eye to the rise of neo-Nazi groups in Ukraine where far-right parties and ultra-nationalists played a key role in facilitating the regime change which took place in Kiev in early 2014.

The hypocritical stance of the Merkel cabinet has met fierce criticism from the opposition in the Bundestag. Sahra Wagenknecht, a left parliamentary group deputy, has repeatedly slammed the political course of the Chancellor, claiming that the government's social and economic policies have ultimately failed, Die Zeit reported.